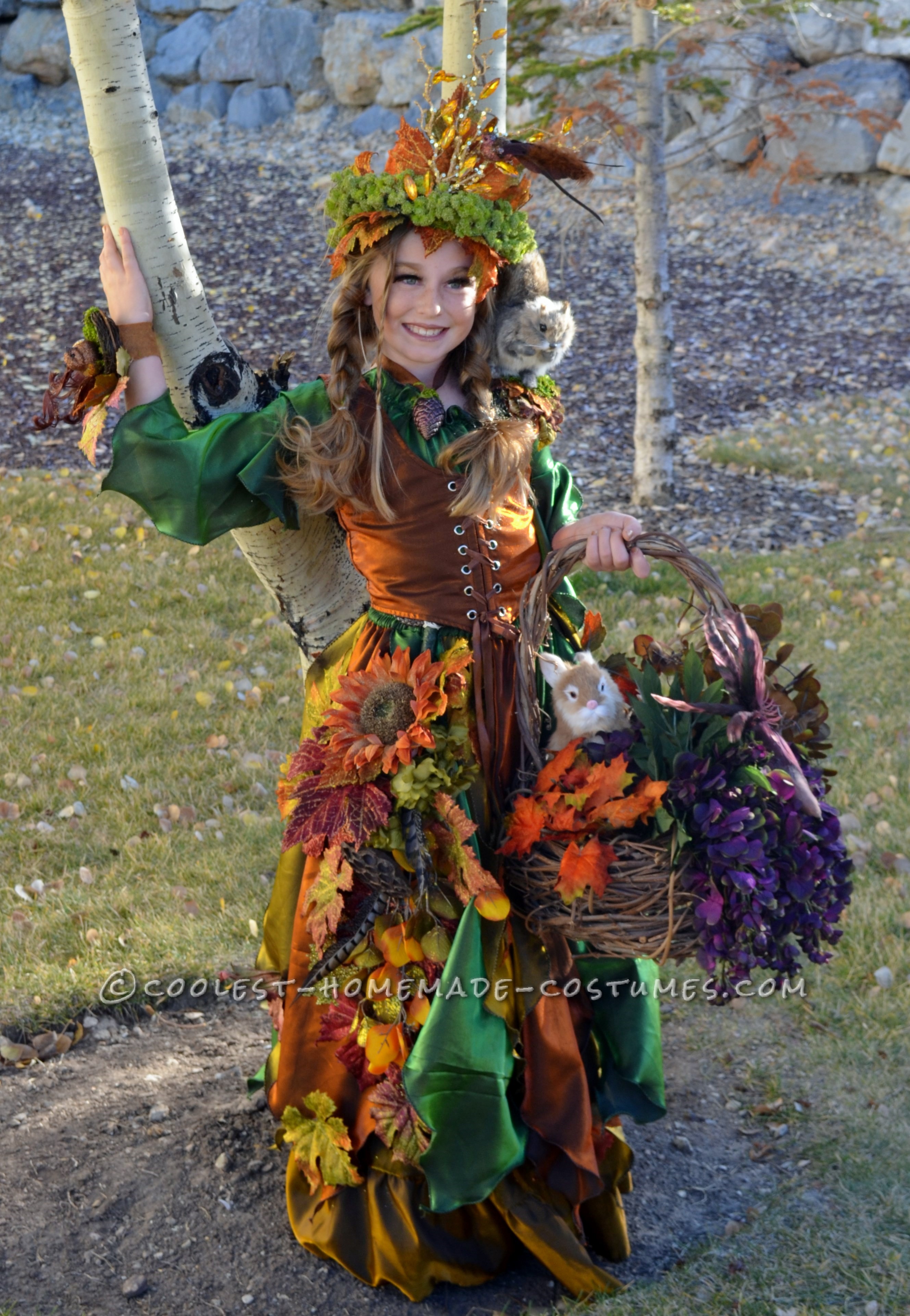 Wow—this beautiful handmade mother (daughter) nature costume was an ever evolving concept.  Each year, my husband and I are faced with the challenge of topping last year’s costumes for our girls, and this year was no exception. We typically begin thinking about next year’s costumes as our girls are sorting through their candy on Halloween night, and generally have the idea/concept solidified by July and something in the making by August.  However, this year, we were WAY behind schedule and barely able to pull this one together by the first event held on 10/26 (in fact, my other daughter had to wear a previous year’s costume as I didn’t complete hers until Halloween eve!).

The idea for a “Mother Nature” costume came along sometime mid-summer, although I don’t recall how or why. This year, my daughter didn’t have any special requests, so we were on our own to find something unlike the many costumes before this. Lucky for us, both of my girls are always open to our crazy ideas and simply trust that we will come up with something for them that is conversation worthy, but not embarrassing.  I think we may have been reminiscing about our very first costume creation for her at 2 years old (a Woodland Fairy), and drew some inspiration from that 7 years later. I should probably note that I really do mean “we” and “our” in these sentences.  Although my husband isn’t the most creative guy around, he is definitely my sounding board and was the chief tailor for many a tutus over the years!

Back to the costume….I know that I gravitate toward nature’s colors and all things animals, so I knew that an earthy/fall color palette, flowers, and realistic animal additions were a must.  I began my search for the “bones” of the costume on Ebay and Etsy. I am not a seamstress, so I prefer to have someone custom make something for me that I can build off of.  For this particular costume, I happened upon a maker/seller of medieval renaissance dresses and the base for the costume was born. I customized the sizing (considering these are made for women, not 9 year old girls), the colors, and had a separate bodice made as corsets were also not available for 9 year olds.

While the product from this seller turned out wonderful, I was regularly stressed that it was never going to come to fruition. It took 12 weeks from the date of my first inquiry until the date in which I finally received the custom dress! Not having the dress delayed the whole vision and production of the costume as I simply couldn’t get a feel for what I would be working with. Once the dress was in hand, I made a trip to Michael’s and purchased a cart full of “what if’s”—flowers, foliage, natural elements, etc. I assembled a bouquet of flowers that ultimately came to rest on her hip and down the skirting, but could not come up with a feasible way to attach this to the dress—it was heavy!  ( we ultimately rigged this portion with a concealed belt as I didn’t want to ruin the dress with excess pins, sewing/tacking, etc)..

The next item to tackle was the headpiece. In my mind, this Mother Nature would be queen-like, so a “crown” of some sort was needed. I made additional trips to various craft and decorating stores, and found these artificial mossy stems to use for the wreath. I included glittered branches on top, glitter leaves around the wreath, and some flowing, glittered stems (LOVE me some glitter!) and feathers down the back, and topped it off with an ornament bird taken from my Christmas ornament box. Unfortunately for my children, these costumes never take function and comfort into consideration, so the headpiece turned out a bit heavy. Being the good sport that my daughter is, she wore it like a champ with zero complaints (and probably has stronger neck muscles to show for it!).

I am a stickler for detail, and when the dress first arrived, the bodice came with what appeared to be a black shoelace for the lace up section. I knew this would never do, but was thrilled with my solution. While cleaning out my youngest daughter’s closet, I came across a pair of her boots that were too small.  I immediately tossed these into the donate pile and then realized that the satin laces in the discarded boots were a perfect match to the bodice on the dress!  Not only was this a free fix, but I used the second lace as a necklace which held another of my Christmas ornaments—a glass pine comb.

I found the squirrel on her shoulder and the rabbit in her basket from another seller on Ebay. Realistic was important to me, but I actually had to double check that these were not true taxidermy (they are not!) as my husband and I are huge animal lovers and non-meat eaters, so while I am willing to go to the extreme for a cool costume, I simply could not authorize the use of a deceased animal….lol.  I developed and sewed a band around the shoulder of the bodice and attached the squirrel with industrial Velcro.  This enables me to utilize both the bodice and the squirrel in the future without destroying the fabric with a more permanent attachment. I also created a nest wrist corsage with leaves and a bird to reside in it, included a few additional bird friends (also from my ornament stash), and a butterfly to the back of the headpiece, and alas, the animals/insects were complete.

The finishing touch was the addition of the random glitter leaves to the skirted portion of the dress. I’m sure if I had more time (and didn’t have a second daughter awaiting a costume of equal effort), I would have enhanced/embellished this costume even further, but enough is enough!  Added some lashes and gold glitter eye shadow, and wah lah!  Mother (Daughter) Nature was born.

My daughter received too many compliments to ever count, won a local costume contest judged by firefighters, and was stopped about every 5 steps to have her photo taken as we trick or treated through an outlet shopping mall the Saturday before Halloween. She definitely felt like a celebrity for a day! Another Halloween bites the dust, and although I wonder why we put ourselves through this each year (and swear we won’t do it again), we have already moved on to Halloween 2014. 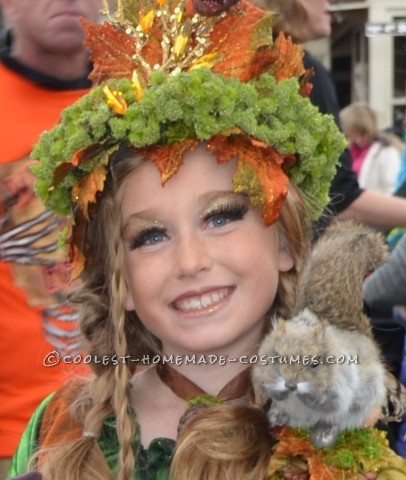 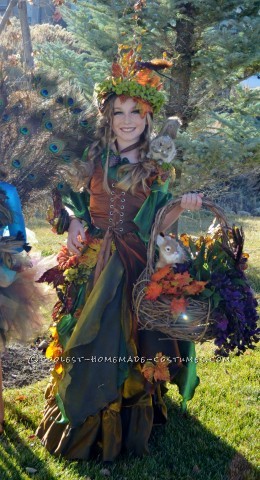 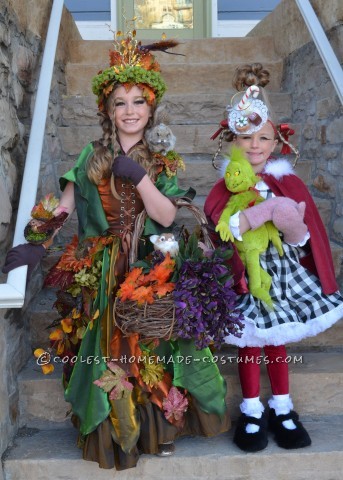 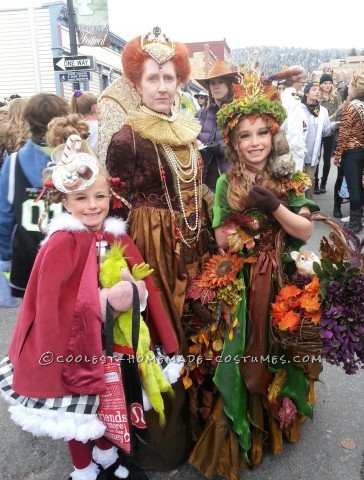 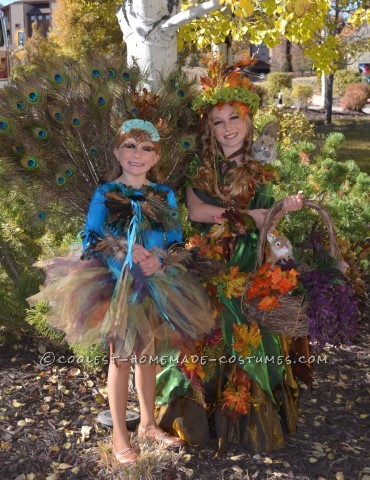