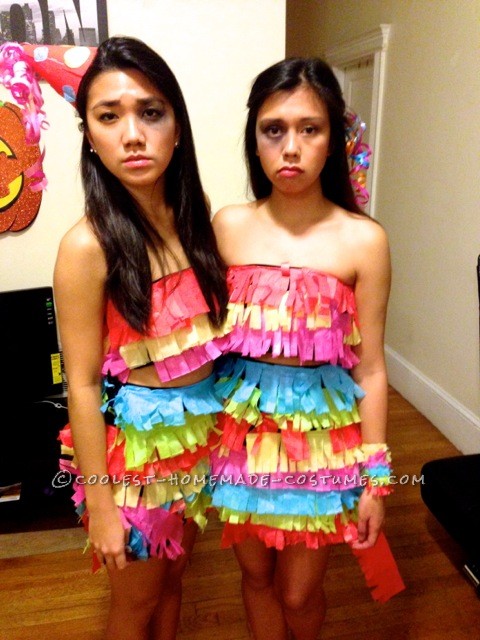 Pinatas are probably my favorite party activity. I’m a big fan of candy and hitting the crap out of something while blindfolded. I always wanted to be the one who knocks all of the candy out of it, but I’m usually the one who swings everytime the pinata gets pulled away…

This costume consisted of:

1. Take the tissue paper and cut them into strips. I based the thickness off of the folding marks which just made it easier to cut.

3. Cut the other bandage skirt in half (or at your desired length) to create the bandeau top. If you have a long bandeau you would rather use that would work too! Place cardboard inside to stretch it out and then hot glue strips of tissue paper on the front and back of the top to cover completely.

4. Lastly, fringe out the strips by cutting the issue paper vertically to create strips. Space out your cuts as much or as little as you want.

If you would like to just be a pinata, I suggest when fringing, cut the tissue all the way up to the hot glued area to cause less restriction. Or an alternative could be cutting the tissue paper into smaller strips and glueing the fringe one by one.

I would suggest gluing the fringe one by one if you have a lot of time. I, however, made this costume very last minute so I had to cut the tissue all the way to the glued area to allow the material to stretch out more. Cutting the tissue paper all the way up still caused parts of the tissue to fall off, but not as bad as if I just cut the tissue half way as originally planned. To fill the gaps caused by ripped tissue, I took the extra strips (which there were a lot of) and fringed them, then glued them onto my costume while I was wearing it.

5. If you decide you like the beaten pinata idea better, just add a black eye (created with makeup of course) and you’re all set!

I also put some colored ribbon in my hair as an extra touch, but you could add a party hat for more fun!

The hardest part of this costume was putting it all on and rushing to fill the gaps. It was very stressful, but the messier it looked the better it became!

The best part was being able to do something fun with my makeup. I’m glad that my original idea didn’t work out because I got to have more fun with it and draw a black eye. Maybe if I do this again, I’lll add some gauze around my head and some bandaids on my arms.

This costume was a big hit (accidental pun) at the Halloween party we went to. Everyone was saying how cute it was and that it was a really creative idea. This was by far the best costume I have ever worn! It all came together so well!

I hope you enjoyed this beaten pinata costume and that it inspires you to give it a try, or maybe be one next Halloween! If you have any questions relating that I didn’t answer, feel free to ask!