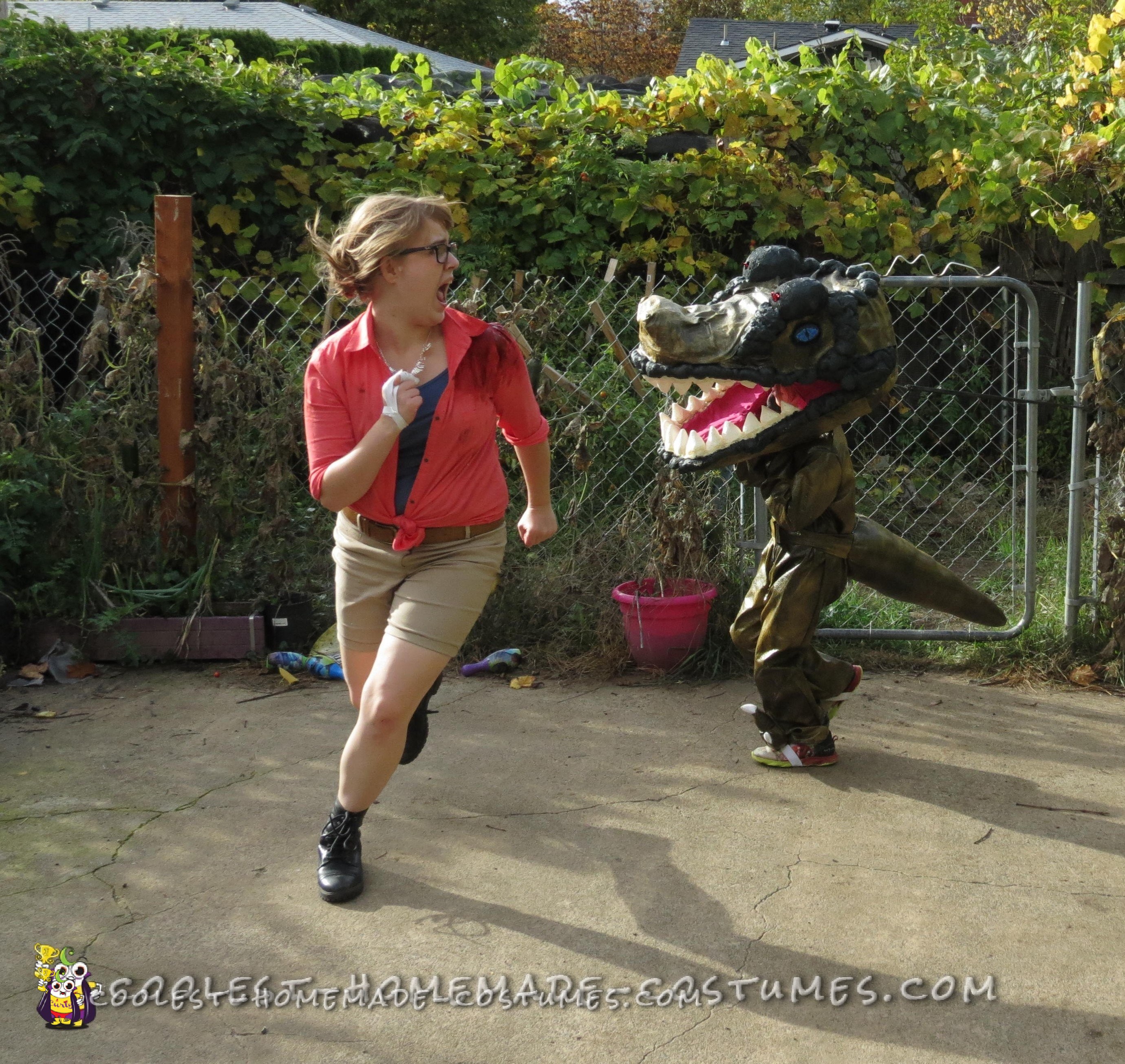 My daughter is absolutely obsessed with dinosaurs at the moment. She wants to be a paleontologist when she grows up, but didn’t think that that would make a good costume. She kept going through all of her favorite dinosaurs over and over again, until she watched Jurassic Park and fell in love with the T-Rex. We looked at some online dinosaur costumes, but overall we couldn’t find anything that she really wanted. She asked if I could make her a “Super awesome T-Rex costume”, and I just couldn’t resist.

I used insulation foam, spray foam, spray glue (which wasn’t as helpful as the spray foam), paint, two small flashlights, poly-fil, Shellac, and lots of fabric for the costume. I sewed her costume together into a giant one piece with a zipper first. Then added a tail that I stuffed with poly-fil and wrapped around her waist using Velcro. The feet stayed on using elastic. I also stuffed them and added some nice white fabric toe claws. The gloves were just an old pair of gloves that I painted green with white claws.

The head was the trickiest part of the whole costume to make. I had to use a giant slab of insulation foam and cut it into several pieces. Then I glued three together for the top part of the head, and two together for the bottom part. I didn’t put them together until after I was done shaping the head. Many piles of snow like foam later and the head was shaped nicely. I glued a few small pieces in between the top and bottom jaw so that the mouth would stay open. I sprayed some spray foam on the top of the head to give it those raised eye sockets everyone knows, and to make the lips stand out. Once that dried I painted the spray foam black and then glued fabric to the top and bottom of the head. I also added some pink fabric to the inside of the mouth.

The teeth were another tricky part that I was not expecting. I individually carved each tooth out of extra insulation foam, and then glued them into the mouth using spray foam. After the glue dried I painted them with Shellac to make them a little stronger and give them a slight yellowish tint. I ended up having to do this twice because I accidentally made the teeth too large the first time. I then painted the eyes and touched up everything else. Just when I thought I was done, I decided to sculpt out some holes into the raised bits in front, and add two small flashlights. This was done mainly because of how well my daughters costume disappeared in the dark. I didn’t want a car to accidentally hit her. It also added an extra wow factor and made it look awesome.

All in all it took about three weeks for me to make my daughters costume. I’m thinking that it might take a few months to finally clean up all of the tiny pieces of foam hidden in the house though.

My daughter Erilyn got a few different reactions while trick or treating. A few people jumped back in surprise at the giant teeth and “glowing eyes” that greeted them at the door. Several others called everyone in their house over to come look at her, trying to get her to turn around and roar for them. Many others put candy in her giant mouth instead of her trick or treat bag, which my daughter loved.

Mostly though my daughter got lots of smiles and “Whoa that’s cool!” reactions. She even had a three year old following her around to see if the girl inside the T-Rex was okay.
This costume took a lot of effort to make, and while I was the one sewing and sculpting it for my daughter, she was there the whole time adding in ideas and color suggestions. She was constantly comparing it to her T-Rex toys to see if it still looked similar enough, even though it was a different color. It was a lot of fun to make this costume, and my daughter is already trying to plan out next years costume. Which of course she wants to be even more difficult to make.

My costume was quite simple to make when compared to hers. I just used a pair of khaki shorts, a blue tanktop, and a pink button up shirt with blood on the shoulder to become Ellie from Jurassic Park. Together I think that we make quite the Jurassic Park duo. 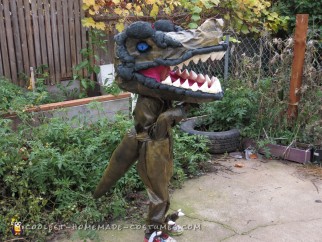 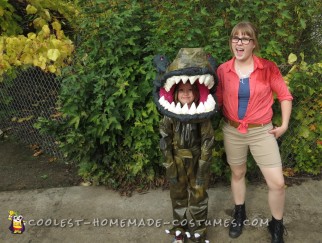 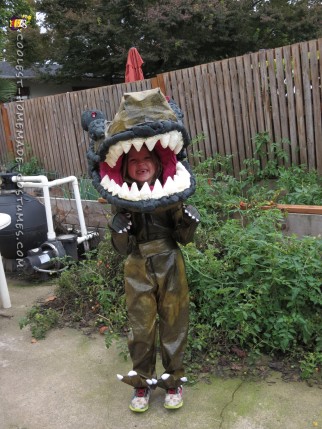 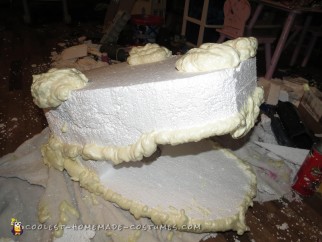 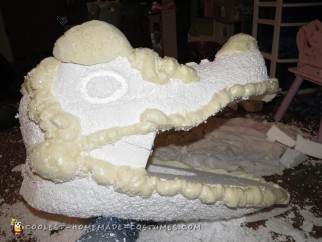 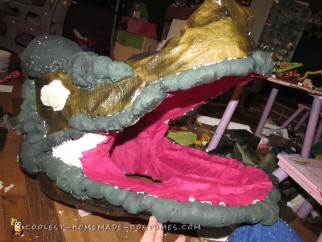 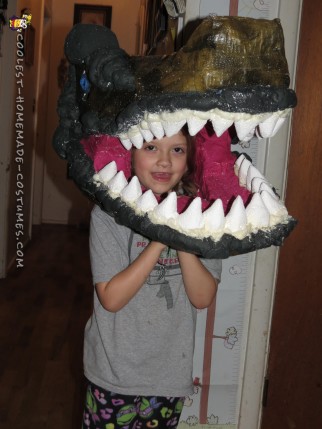 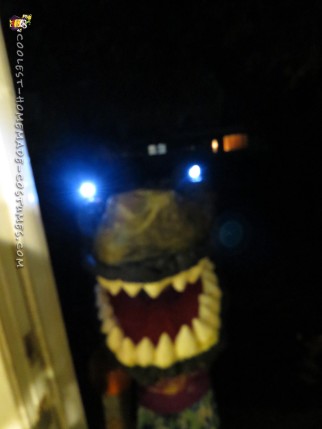 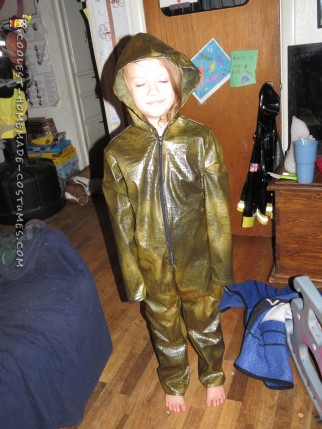