My four-year-old son loves dinosaurs and wanted to be a T-Rex for Halloween 2011.

I constructed the T-Rex Dinosaur Costume in four components: head, tail, suit, and feet. I decided to build it this way to allow my son to easily take off the tail to sit in a chair or take off the head to take a break. The construction of each component is discussed below.

I began work on the costume in August and spent many late nights working on it. It wasn’t finished until a few days before Halloween. The costume turned out really well. My son really enjoyed being T-Rex as shown on this video (http://www.youtube.com/watch?v=cM1T7_Hjm3U). Now he has a dino decoration for his bedroom.

[CONSTRUCTION OF THE HEAD:]
When planning the head, I knew I wanted my son’s head to peek out of the T-Rex mouth, because it would allow the most realistic look and would give him an interesting perspective from within the T-Rex Dinosaur Costume – looking through the teeth.

I Googled images of T-Rex and then made some scale sketches to get an idea of how to proportion the head to fit my son. I decided to use 1.5“ thick rigid foam insulation board material to make the head. We had some of this material left over from home renovations. Also the foam is light, strong, easily carved (using a sharp utility knife), and takes paint well.

To create a 3D head, I drew a full size side-view of the head based on the sketches, then cut out several pieces of foam with this shape. The two side pieces were cut larger than the centre pieces to enclose the head.

Next I glued these pieces together with construction adhesive (which bonds the insulation very well) to form a helmet. Then I began to carve the shape and features into the head. The upper teeth were carved into the profiles. I added another piece of foam for the jaw and glued in individually carved teeth.

I did several test fits as I was building the head, but in the end I needed to add an additional piece of foam to allow the head to rest properly on my son’s forehead. I glued pieces of an old towel in the head opening for extra comfort. I also glued and screwed in some nylon webbing with a fastener clip to create a chin strap that is similar to that of a bicycle helmet.

The T-Rex head looked pretty good, but it didn’t look right without any texture. First, I carved out the small scales using a ball point pen. Then I used canned spray foam to create the bony ridges along the eyes and mouth. I shaped the foam to create the proper look as it was curing. I painted the T-Rex with some left over latex house paint. I started with black to fill in the spaces between the scales. Then I dry brushed on the green and grey paint to help the relief of the scales stand out.

[CONSTRUCTION OF THE TAIL:]
The tail is constructed of bailing wire covered with fabric. I built a wire frame with integral wire straps that are similar to the straps and waist belt of a backpack. This allowed my son to take the tail on and off quickly and easily. The straps didn’t work as well as I had hoped and should have been longer to provide more support or have been connected to the lower portions of the tail. My wife sewed a sheath and covering for the tail using a stretchy fabric that is the same as the suit. Then I added some spray foam to the tail for texture as well as some paint. The latex paint covers fabric well and flexed with the stretchy fabric.

[CONSTRUCTION OF THE SUIT:]
Using some pajamas as a pattern, my wife sewed a shirt and pants using the same material as the tail covering. Again, I added some spray foam for texture and some paint.

[CONSTRUCTION OF THE FEET:]
I carved the feet from 2” thick rigid foam insulation board. I added a few layers of alternating construction adhesive, drywall tape, and thin layers of foam to strengthen the areas of the feet where the foam was thin. Texture was added to the feet using a ball point pen. The feet were painted using the same technique used to paint the head.

I glued and screwed elastic straps onto the foam to go around the ankle and around the ball of the foot. These straps were stretchy enough to work with and without shoes. The feet worked well and looked good, but the toe nails wore down quite a bit after walking for a long distance. The poor T-Rex also broke a toe running across a street. 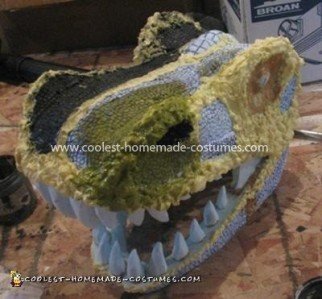 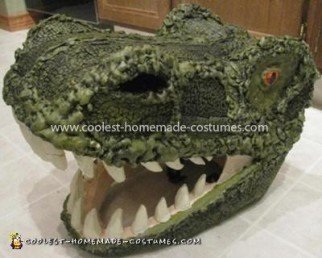 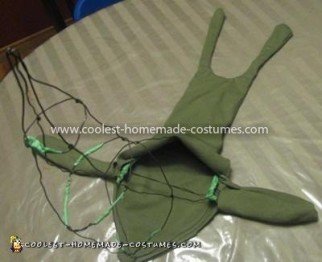