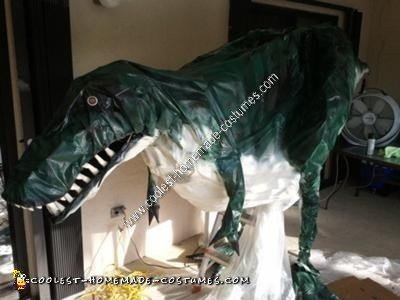 Here is my Homemade T-Rex Halloween Costume Idea I made for Halloween 2010. I was inspired to make it after watching a “walk with the dinosaurs” exhibit presentation on YouTube and thought to myself, “I could make that.” He was a big hit on Halloween. My nieces and nephews loved walking next to a giant roaring dinosaur and joining in all of the fun. He made large crowds during trick or treating and when that was done I just roamed intersections terrorizing cars. Funnest Halloween ever!

You can see my T-Rex in action on YouTube. Check out these videos:

Here’s how I made him:

When I was designing the costume, I knew I wanted the T-Rex to be big so I needed light materials. I built a frame using PVC pipe. I built in a Baby Bjorn sling so I could strap the frame to my back. I also used an old belt to keep the bottom of the frame tight to my back and more secure. Once I had the frame, I used 14 gauge wire to build out a wire frame of the body. I also built a wire frame for the head.

I tried a couple of methods for the moving parts and here is what I settled on. For the legs, I created joints by drilling a a hole through two PVC pipes and threading a bolt through. I then tightened on a nut leaving it loose enough so the pipes could rotate freely. I had a problem with the legs bending correctly so I added two springs to each leg. One from the top of the frame to the middle of the thigh bone and another from the bottom of the thigh bone to the bottom of the shin bone. Then when the foot bone was strapped to my leg, walking made the whole dinosaur leg go up and down as well.

For the mouth I just had back of the bottom jaw threaded through a PVC pipe so it would rotate freely and then used rubber bands to keep the jaw shut. A wire pulling at the back of the jaw then allowed me control to open and close the jaw. To steer the head left and right I came up with making a rectangle of 4 PVC pipes attached with joints like the legs at each corner. By pulling one side or the other, I could then skew the rectangle. By mounting the head at one end and holding the other, I could then turn the head by pulling one side of the rectangle and pushing the other. I also strapped the wire pull for opening the jaw to the rectangle for easy access.

For the skin I found some plastic drop cloths with a patten similar to reptile skin. I just wrapped the wire frame parts and the frame with it and attached it with clear packing tape. I left the top of the dinosaur open for ventilation and I left a hole on the bottom near the legs for me to stand inside. I also left holes on the sides and the front which I covered with see-through cloth so I can see out.

The feet were made out of cushion foam padding which I wrapped around a pair of old flip flops. I made the toenails and the fingernails from toilet paper tubes and I made the teeth out of toilet paper by wetting it, squishing it into shape and letting it dry. I glued them into the mouth using hot glue.

I then painted everything with spray paint using an eggshell color for the teeth, the bottom and inside parts. I used a forest green spray paint for the top. I also used black spray paint for the nails, inside of the mouth and pattern accents around the T-Rex. I printed out some eyes on some glossy photo paper and hot glued them on.

For sound effects I used portable iPod speakers strapped to the frame and my Android phone. I played the theme to Jurassic Park in a loop the entire night and then played T-Rex roars using a soundboard app.

The T-Rex took me around 40 hours spent over 3 weeks to make from concept to finish and cost around $150 to build. If I knew it would cost so much in the end, I would have put more thought into how to make it more resilient. If I made it over again, I would probably not use wire for the framing. Also either I didn’t wait long enough for the spray paint to adhere to the plastic or it just wasn’t a good choice because it flaked off everywhere I went, especially where the knees touched the body. It was raining though on Halloween so that didn’t help. PVC was a good choice for the frame and the backpack mechanism for keeping it on worked great.

All in all I was pretty proud in the end with what I accomplished. 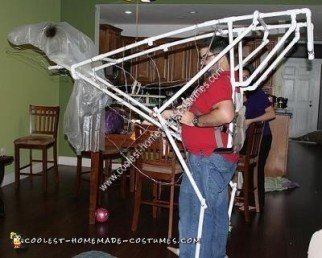 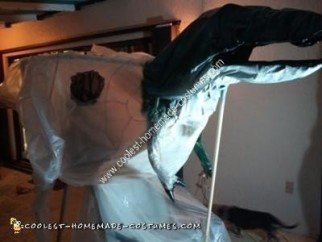 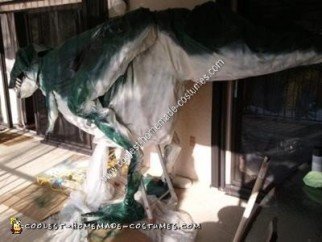