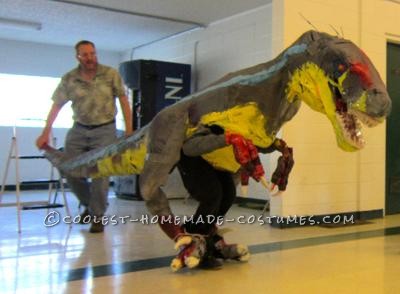 Last year I decided to build a velociraptor from Jurassic Park. I wanted it to be life-sized (in the movie it’s 12 and a half feet long); it would be my most ambitiously difficult Halloween costume yet. Shortly after the last Halloween, I settled on the male raptor design from Jurassic Park 3 (it would be the least likely of the various velociraptor designs to be confused with a different dinosaur) and got to work, stocking up on lots and lots of duct tape for attaching things.

I started my Homemade Jurassic Park III Velociraptor Costume by tracing the head onto two sheets of cardboard. I put Styrofoam between the two halves to make the combined product 3-dimensional and began building the head on that. I cut and made indentations on the cardboard as needed, and used crumpled paper to add details and round it out.

I went through several ideas to make the jaw open and close and the only one I had time to to get working was to attach a string, in this case I used a small jump rope, and some bungee cords to the lower jaw and pull on it whenever I wanted to open the jaw. For the eyes I got a red plastic ball, cut it in half, taped them to the head, and painted irises and pupils on the halves.

Moving on to the body of the costume, I used a 2×2, 8 ft. long block of scrap lumber for the spine. I attached it to the base of the head. To support the weight with my own back, I attached a roughly torso-sized board near the middle. I slipped a pillow case with a hole in it through the wood and filled it with crumpled paper and other debris from building it. This provided both a “hump” on the costume’s back and cushioning on the inside where it would rest on the back of the hunched-over wearer.

For the rib cage I spent $8 on 4 plastic “Sound Tubes” and taped them to the board. Later I added in a piece of cardboard for the sternum. I then tightly wrapped the torso in a leathery material and cut slits for the arms to come out of later.

To begin to give the costume shape, I folded cardboard over the back and taped it into a tapering tube around the tail. For the tip of the tail, I got a stick of plastic I picked up at an office building and connect it to the wood with a metal hinge and some washers. To keep it at the right angle as well as allow it to fold up for transport, I simply got a rope and tied it to a hook on the wood with little slack.

For the legs I cut out the general cardboard outlines, then started bulking them up with “muscle”, cardboard, and more “muscle”. They were attached to the back by a piece of leathery fabric taped down. On the lower halves of the legs I put in hinges for movement and made toes out of “muscle”. For the characteristic velociraptor toe claws, I found a viking helmet for $2, took off the horns, and used them as claws. The helmet itself I attached to the wooden spine to keep the wearer’s head in place.

For the arms I cut the sleeves off a leather jacket. For the 3-fingered raptor hands I took some ordinary cleaning gloves I had, taped some of the fingers together and taped pencils to them for an elongated finger effect. I added “muscle” padding and claws made of air-dry clay($9).

Later I bulked up the head because the rest of the body made it seem too small. I added in teeth of air-dry clay to the mouth and taped coffee straws to the top of the head as a plume of quills.

I used things including pool noodles and limbs off old clothing stuffed with crumpled paper for the muscles. Then I covered almost the entire costume with leather, faux leather, and other fabrics cut off jackets and handbags I got at Goodwill to form the scaly skin. Then I painted the costume. At school, everyone was amazed.

The costume in action

How I put it on 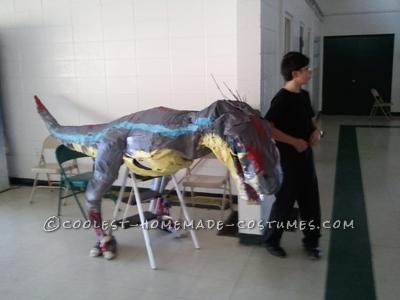 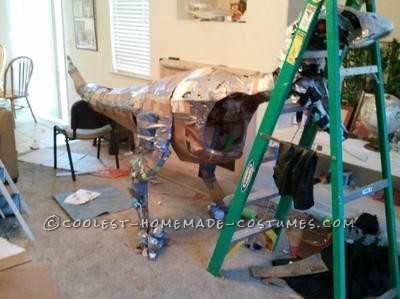 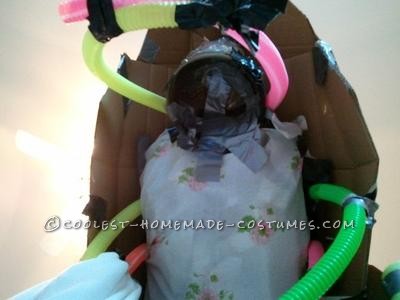