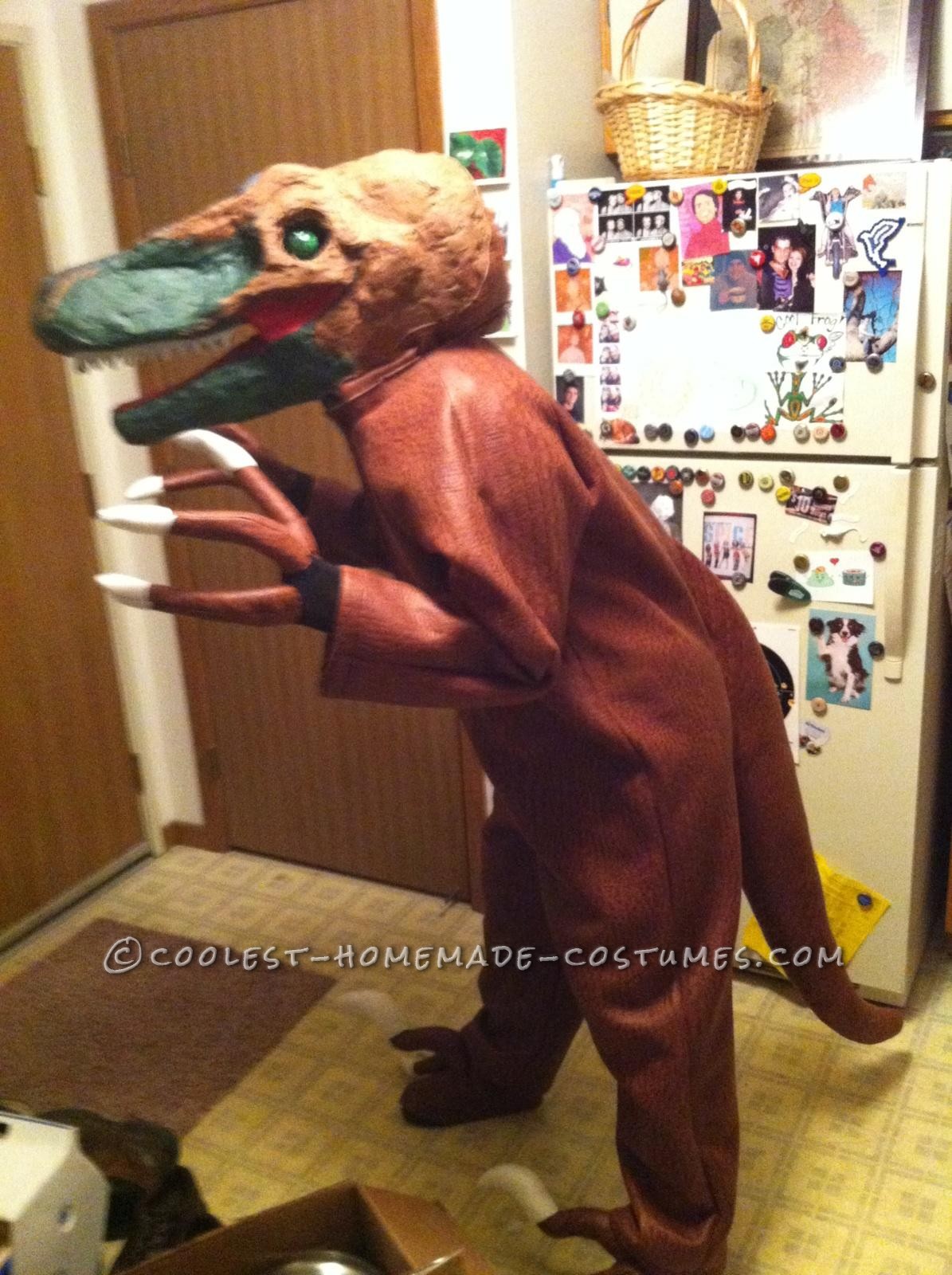 I have loved dinosaurs ever since I was a little girl, and this Halloween, I knew right away what I wanted to dress up as- a Velociraptor! This was probably my most ambitious costume to date, and my lovely boyfriend was a tremendous help to me while making it. I thoroughly enjoyed wearing it out, even though it was a bit heavy and hot. I wore my bike shorts and tanktop underneath, but still ended up drenched in sweat by the end of the night. A lot of people ended up calling me a T-Rex, which was to be expected I suppose.. Onward with pictures! 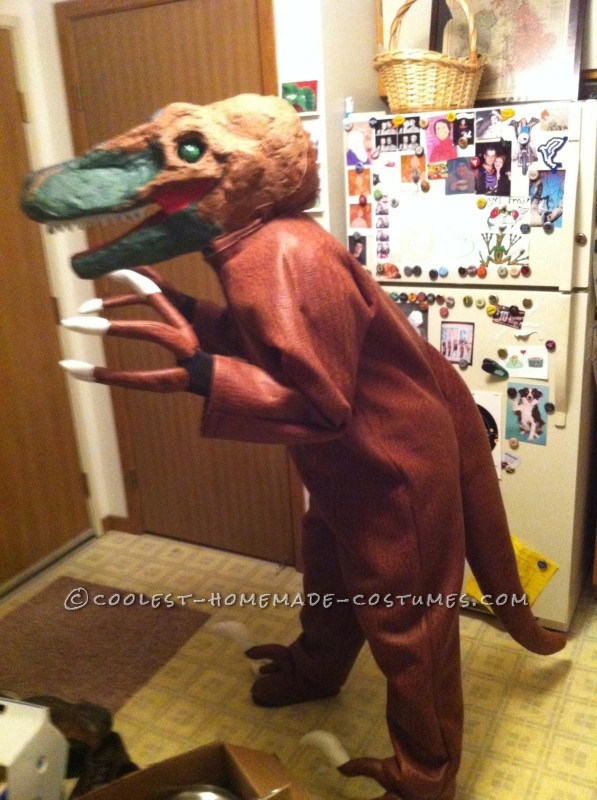 The first thing I did was build the head. Using reference pictures of Velociraptors from the internet, I formed the basic shape of the head by bending chicken wire and fastening it around a baseball helmet I got from Goodwill. This took quite some time and lots of poked fingers and help from my boyfriend.

After I got the shape I wanted for the upper and lower jaws (which were attached separately), it was time for the \”muscle\”! 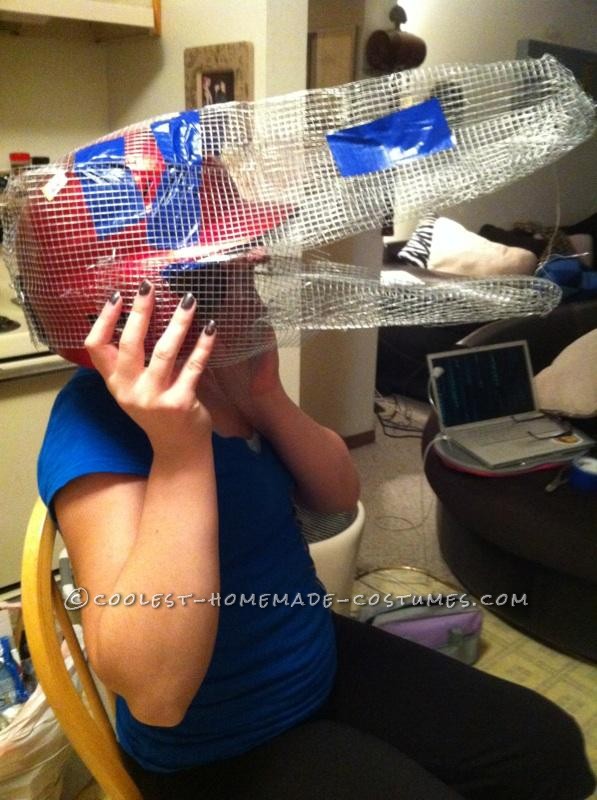 I used yellow expanding insulation foam to make the \”muscle\” on the head. I sprayed it in to fill the cavities of the wire, and also generously over the surface. I think we ended up using about 4 cans. It was a little hard to work with because it was not very co-operative when you wanted to be precise. We ended up getting it everywhere, including all over the deck outside. Oops!

Once the foam was dry and fully expanded, I used a utility knife and more internet reference to carve out the underlying shapes of the head. (eye sockets, jawline, etc.) I also used pieces of the foam that I had cut off and hot-glued them to build up places that were lacking, such as the ridges above the eyes and the jaw.

Next, it was time for skin! 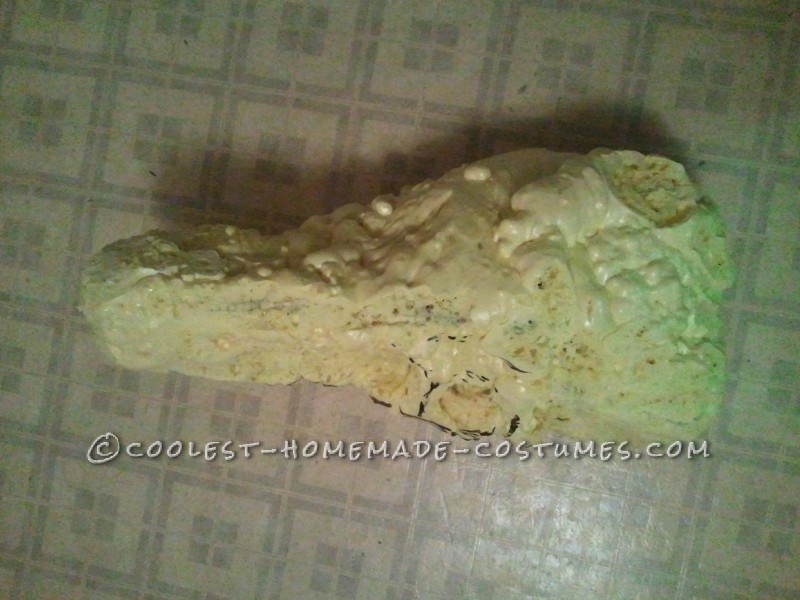 This is a good example of before/after carving on the foam. 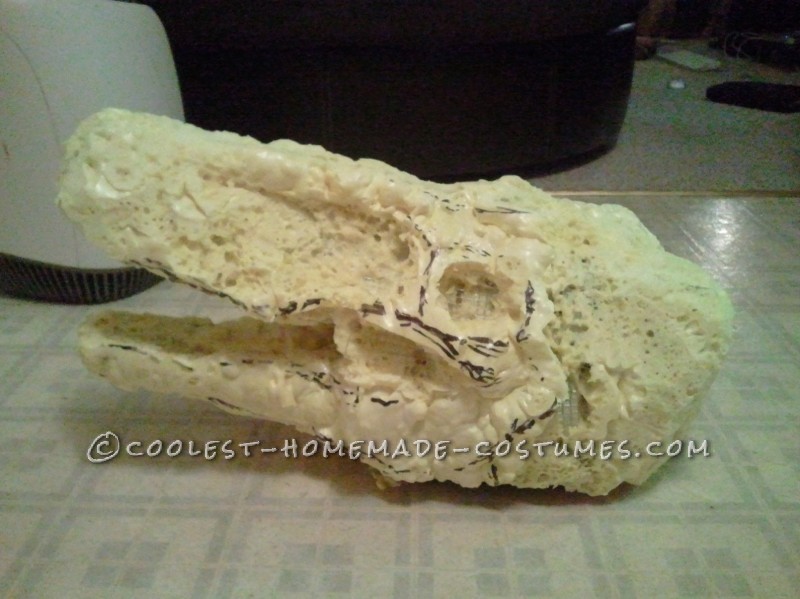 It Puts The Compound On It\’s Skin…

For the \”skin\”, I decided to use lightweight drywall joint compound, which when dry, would ultimately give me a smooth paintable surface.

This stuff was even harder to work with than the foam, because it liked to stick to itself and make big globs which would then fall on the floor…messy. It took a lot of work and several applications to smooth it out to my liking.

After the compound was dry, I sanded it as smooth as I could. The combo of the holes in the foam and the drywall compound meant I could not get it comletely smooth. That\’s okay though, because it gave the skin a more realistic texture. 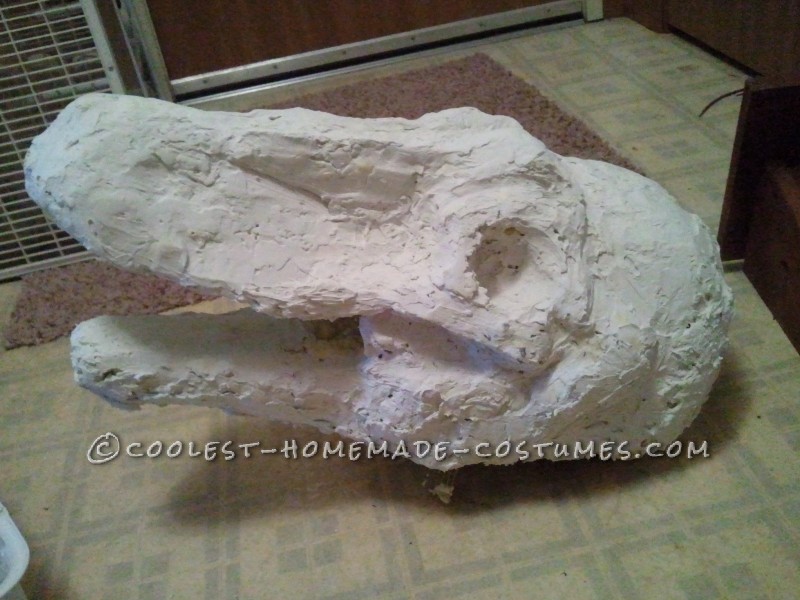 This is after painting with primer. I didn\’t take a picture of the plaster, but it looked like this, except a little more gray.

Throw In Some Color

I used a basic white primer to prepare the surface for painting. Once that was dry, I decided on my color palette. I wanted at least some of the head to match the fabric I had picked out for the body, so I painted the back of the head brown and inside of the eye sockets a very dark brown so the eyes would stand out. Then I mixed a dark green for the main part of the upper and lower jaws, painted the inside jaw/cheek areas red and painted a dark gray-green stripe down the nose.

For the teeth, I just used a strip of cardboard painted white and hot-glued onto the inside of the mouth, and the tongue is a piece of red felt hot-glued down. I was going to add another row of teeth on the bottom jaw, but due to my limited vision inside the mask decided to leave it out for the time being.

The eyes were actually made from a halloween eyeball toy I found laying in the hallway of my apartment building! I erased the creepy eye that was painted on the with my handy-dandy Magic Eraser, and then painted my own raptor eyeball with acrylic paints. I then sealed them with clear nail polish to make them shiny. They are attached into the sockets on a small piece of styrofoam painted black and hotglued down.

Since the head was now very heavy, I needed to make a support for my neck. My boyfriend helped me out big time on this and fashioned me a two-piece support made out of styrofoam and memory foam. This attached to the head with velcro for easy removal. 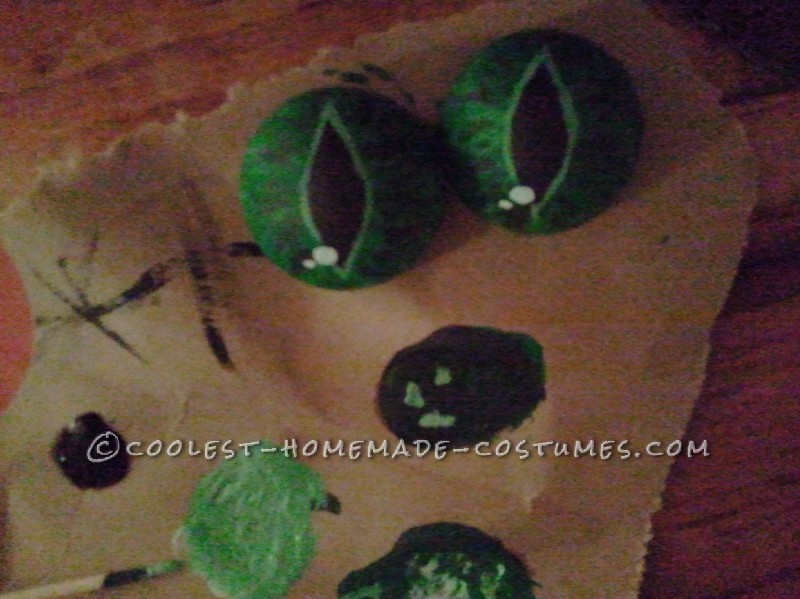 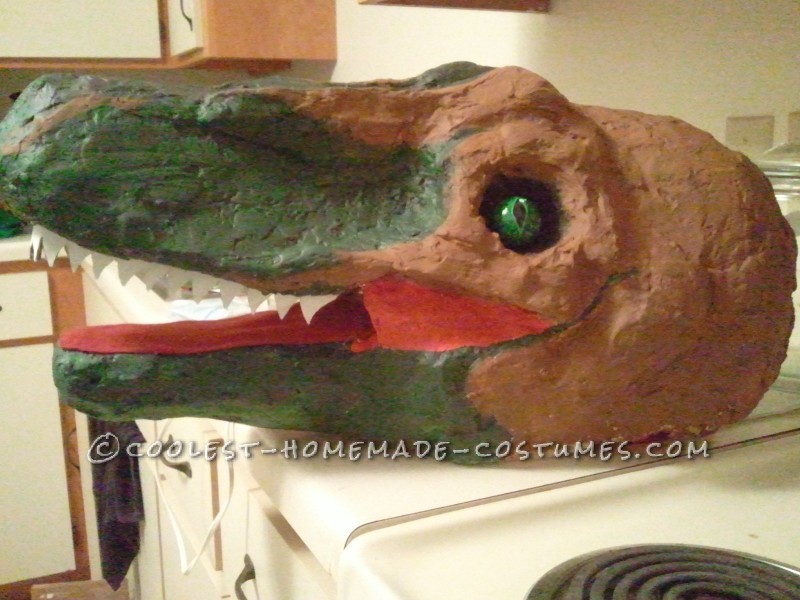 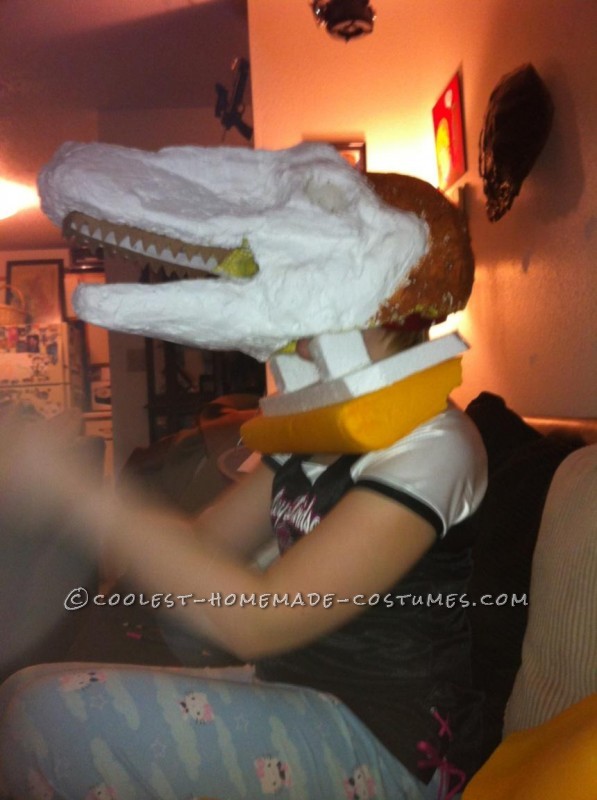 A good view of my neck/head support

A Body of Work

I actually finished the body before I finished the head, but for the sake of continuity I\’ll just make it step 5. :)

This one took me a while. I searched long and hard to find an adult dinosaur costume pattern, but apparently none exist. This made me sad, but also more determined. In my searching, I found another dinosaur costume which had used McCall\’s MP238, a costume pattern which included an option for a kangaroo. I used the kangaroo pattern, altering parts of it to suit my needs. I made the tail longer, and eliminated the pouch, ears, hood, and mittens. I also drew up my own pattern for my claws and toes. I attached the toes to the spats that were included in the pattern.
The claws/hands were made from a basic dark brown jersey work glove. I made three fingers for each hand and sewed one on the thumb, one over the first and middle fingers, and one over the ring and pinky fingers on each glove. This allowed me to still be able to pick up and grasp things. (And open doors, which all good Velociraptors should be able to do. ;))

I had a ton of fun making this costume! All in all it took me probably a month and a half. There are several things I would do differently if I had to do this again…

-Choose lighter material(s) for the head. Wearing this was very heavy and very HOT, due to the insulating foam. I wore it to a bar and had to take frequent outside breaks to keep cool. The drywall compound added a lot of weight as ell, and the texture made it hard to paint.

-Start earlier/don\’t put it off. I started this well over a month from Halloween, but I ended up scrambling towards the end to finish it. This is all through fault of my own though. ;)

-Customize the body more. I really liked how the body turned out from my modified pattern, but if I could I would\’ve liked it to be a little more form-fitting/realistic. Practice makes perfect!

All in all I had a blast doing this. It was a hit at the bar, with everyone wanting to take a picture of me \”biting\” their head or arm, etc. I wish I had gotten to wear it more places but maybe next year, Velociraptor will return!!!! 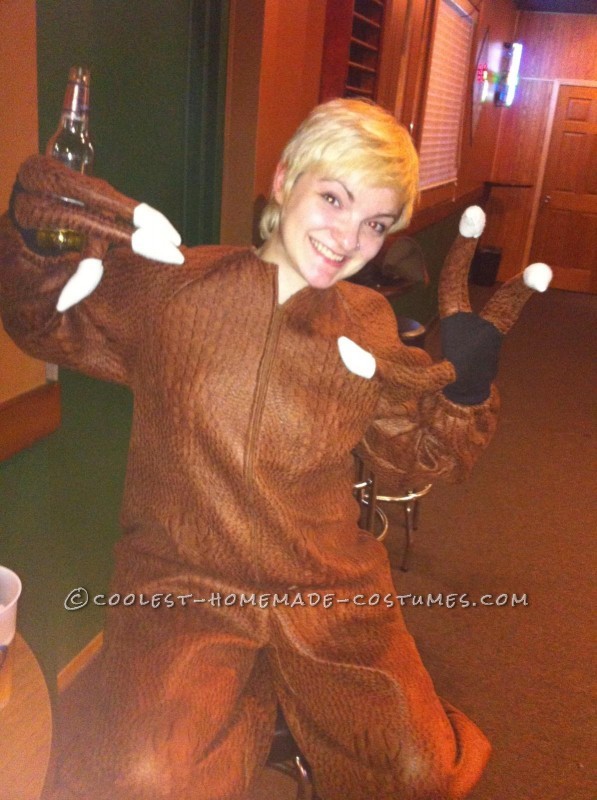 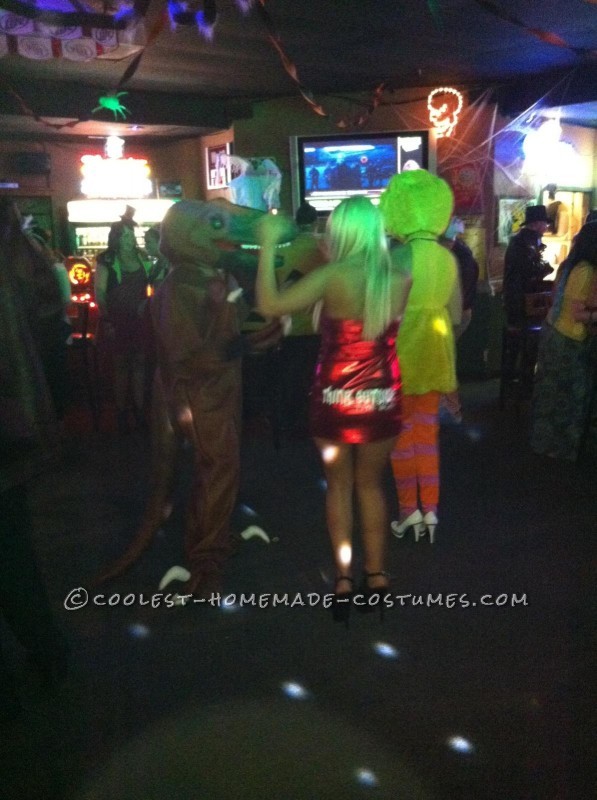