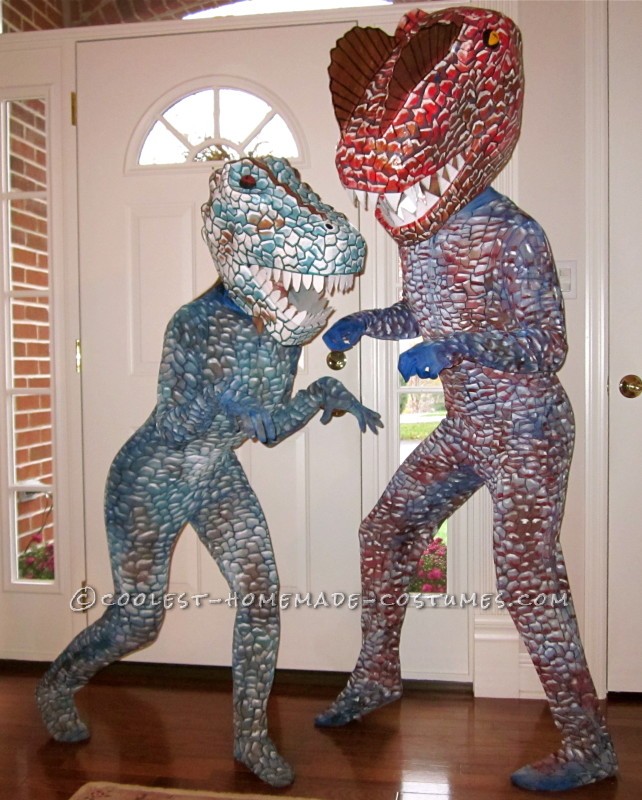 This year for Halloween, my boyfriend and I wanted to stick with a costume that was basic in principle, but innovative in terms of execution. We decided that creating our own one-of-a-kind dinosaurs (T-Rex and Dilophosauras) was the way to achieve just that.  I’ve seen several dinosaur costumes over the years, but I wanted ours to really stand out and to be original. The best way to do that was by constructing large dinosaur heads out of cardboard and paper mache, creating out our own stencil for dinosaur scales, and bringing it all together with a killer paint job.

We spent about two months constructing these costumes (starting in early September and finishing on October 31st around 6:30PM), all the while making an absolute mess of my parent’s basement with cardboard boxes and scraps piled sky high and newspapers scattered all over the floor under our freshly painted dinosaur suits. Good news though, it’s one week after Halloween and I’ve finally rid the basement of spray paint fumes!

In the two months that my boyfriend and I worked on these costumes, our date nights consisted of sculpting cardboard, covering cardboard with paper mache, spray painting, hand painting, and even more painting! But hey, we learned that we make a great team when working together! This was the first Halloween project that we’ve taken on together (and the largest for either of us), but boy did it pay off!

On Halloween night, we started off by heading to a friend’s house party. When we walked in the door, everybody’s jaw dropped!  They couldn’t believe we had made the costumes ourselves. After a while, we headed to a bar in downtown Pittsburgh that has the greatest annual Halloween party around. When walking through the bar in full dinosaur gear, we noticed that strangers were taking our pictures and pointing and staring. We received compliment after compliment on our costumes, one of the funniest being, “Wow, you painted your shoes to match your suit!” When I responded with, “Yea! I painted the bodysuit too!”, the girl couldn’t even believe it! She thought we had purchased the bodysuits and painted the shoes to match.

All night, people were asking us a lot of questions about how we made the costumes, and each time we took off our heads and showed them the inside woven cardboard and duct tape. It felt wonderful to be recognized for our hard work. There were probably around 300-400 guests at the bar that night, and my boyfriend and I were two of 10 people to be recognized for Best Costume. We didn’t win the overall Best Costume, but people kept approaching us after the contest to say that we had the best costumes there and should have won, and that was good enough for us! 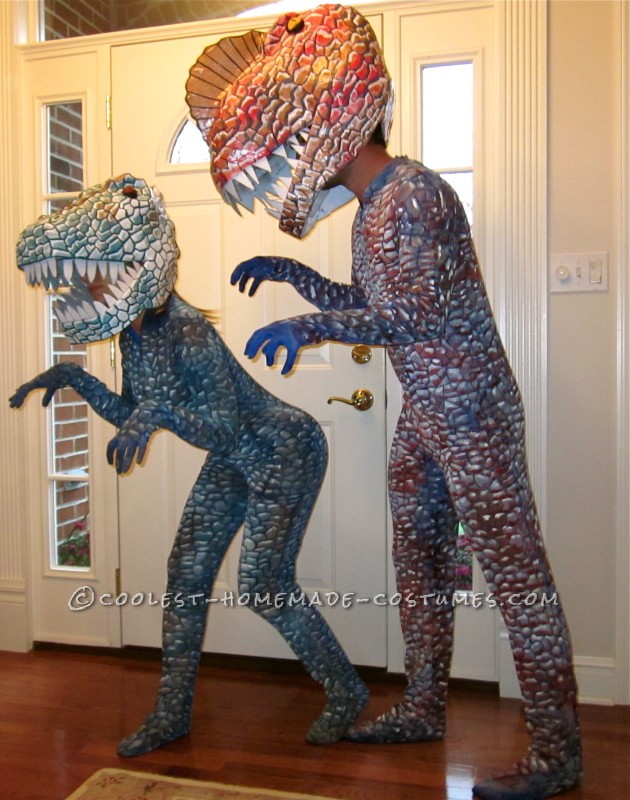 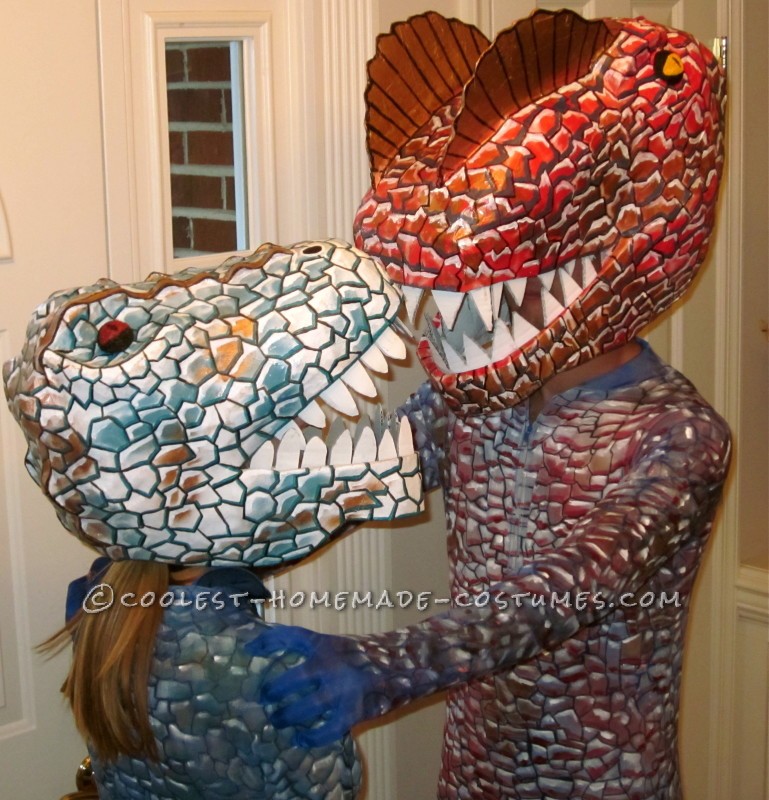 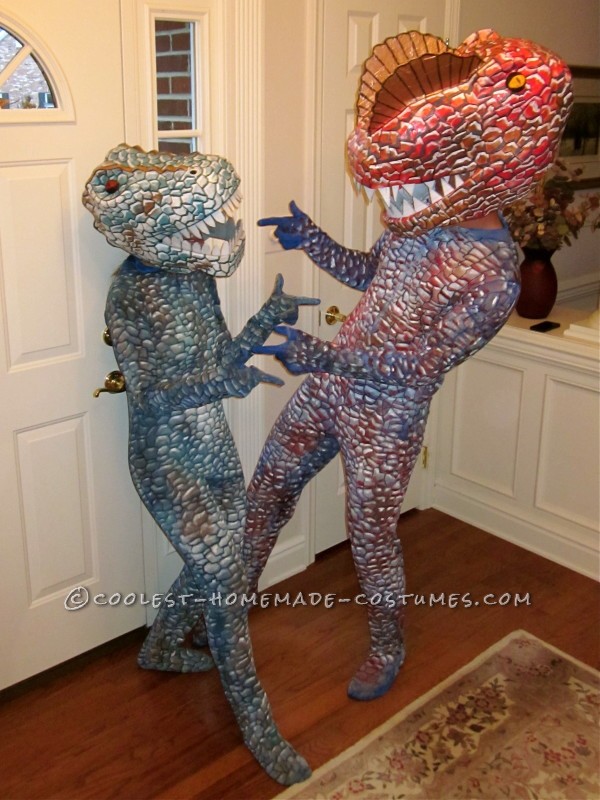 Construction of the Dinosaur Heads 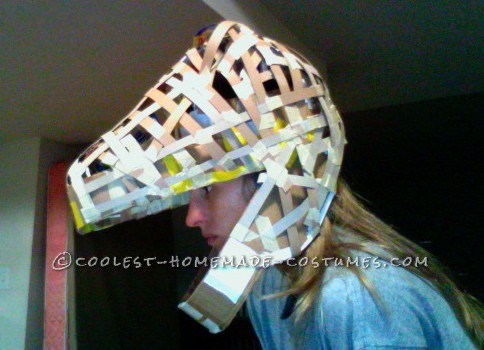 To create the effect of dinosaur scales, I created a stencil from card-stock paper. Using a paintbrush, I brushed a thin layer of wood glue and water over the stencil to provide it with some protection before the spray painting began. Much to my surprise, the stencil held up throughout the whole project. A few pieces here and there ripped, but I patched them up with masking tape. Here is the stencil after painting the red dinosaur. 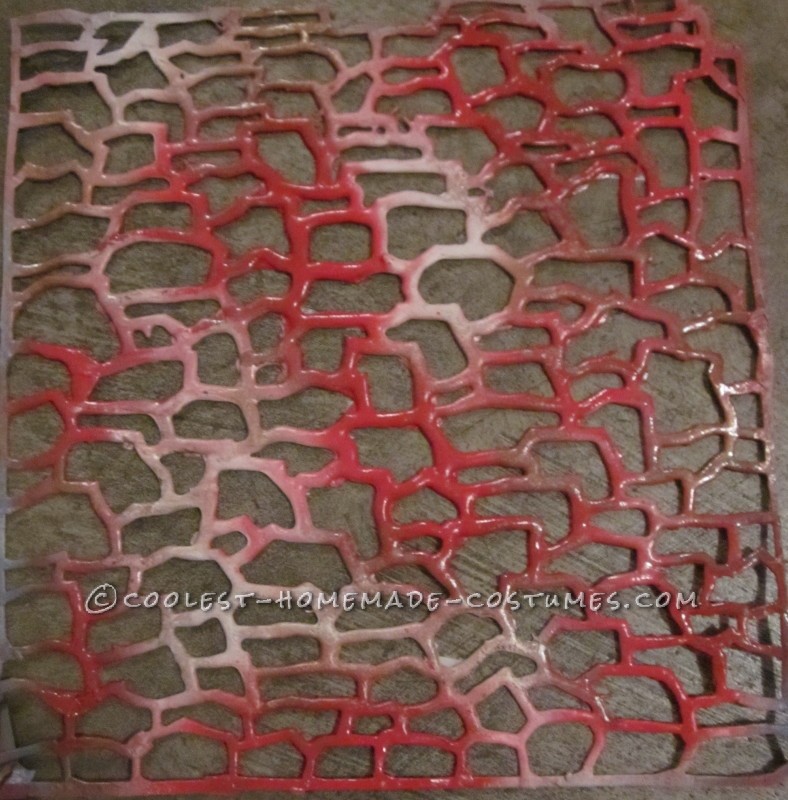 For the body of the dinosaur, we purchased plain blue skin suits from target and stuffed them with newspaper. We selected our spray paint colors and using the stencil, began spray painting the body suit. The spray paint seemed to absorb right into the fabric of the skin suit, so the color wasn’t as bright as we had hoped. When the whole skin suit was spray painted with scales, all of the colors blended together and didn’t look that great, so we used a Sharpie marker to emphasize each and every dinosaur scale on the suit.

Since the spray paint and sharpie on the skin suits didn’t stand out as much as we’d hoped, we created shading and depth to the scales by hand painting with white on the top of each scale and a darker color on the bottom of each scale.  This really gave the illusion that the scales were three dimensional. 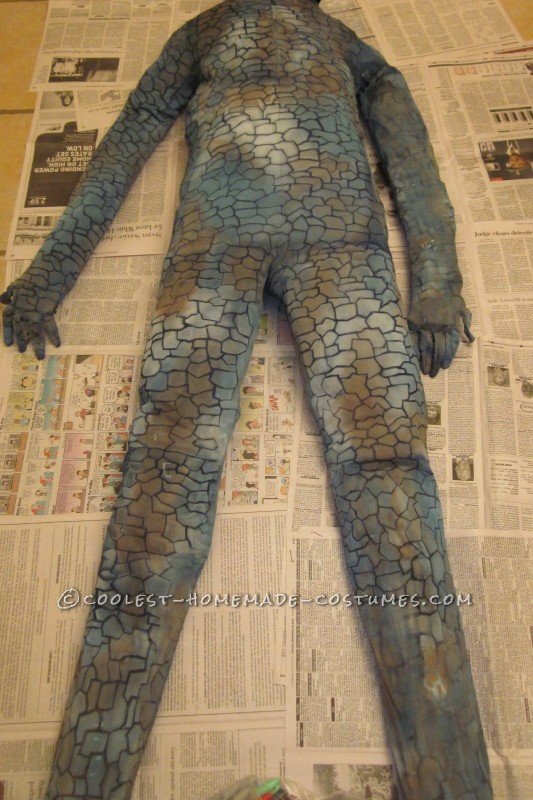 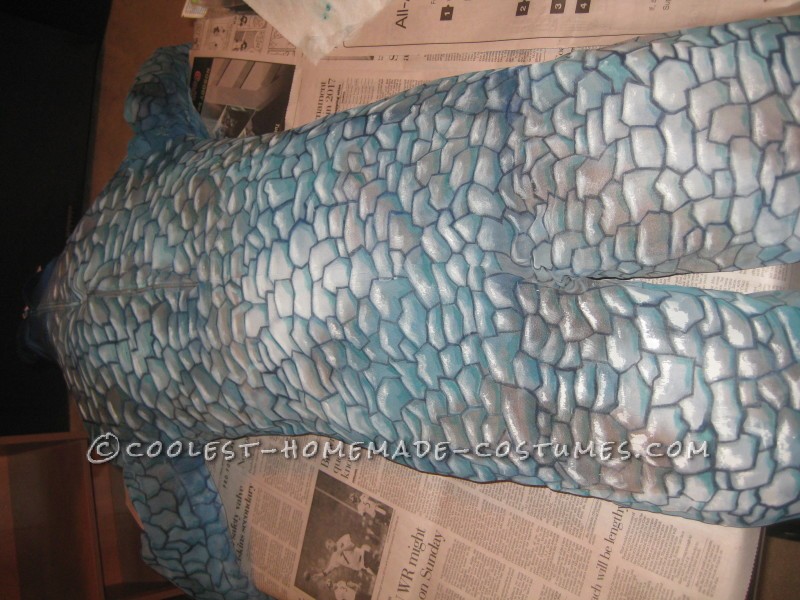 To paint the dinosaur heads, we used the stencil and spray paint again. The head was a lot faster to paint than the body, and the paint stuck much better to the paper mache head than it did to the fabric of the skin suit, so the color appeared much brighter. We hand painted the outline of the scales with black paint, and added shading and depth to each scale with lighter and dark paints to achieve the three dimensional look. We cut teeth out of cardboard, spray painted them white, and hot glued them into the mouth. For the eyes, we cut Styrofoam balls in half, hand painted them, and hot glued them into the eye sockets. 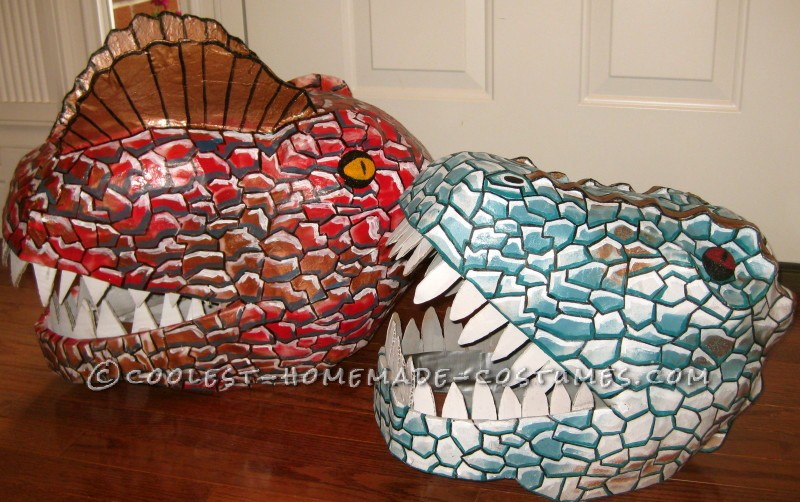 We spray painted the shoes using the stencil, used sharpie to emphasize the scales, and added shading and depth with hand paint. 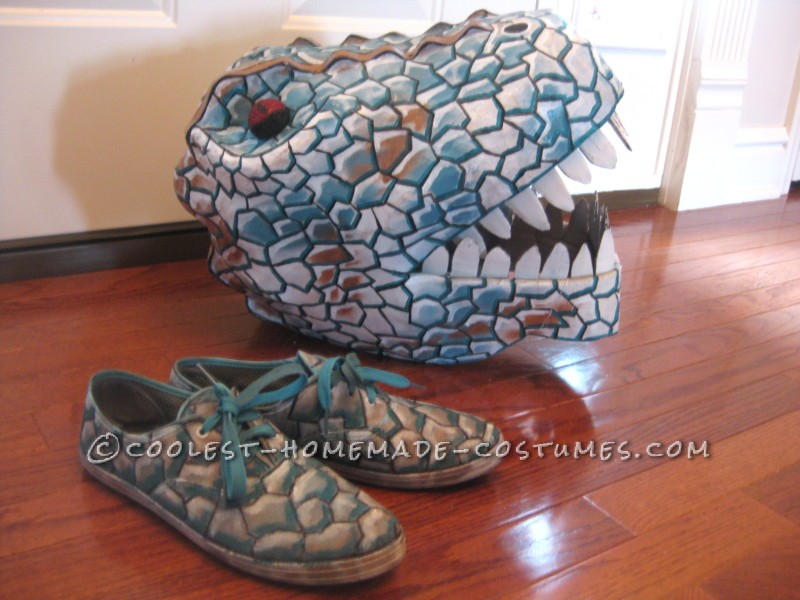 The final task was perfecting our dinosaur poses and sound effects! Surprisingly enough, we were able to dance the night away in these costumes without any issue. We didn’t get overheated in the painted skin suits and the giant dinosaur heads didn’t get in the way at the bar as much as we figured they would!