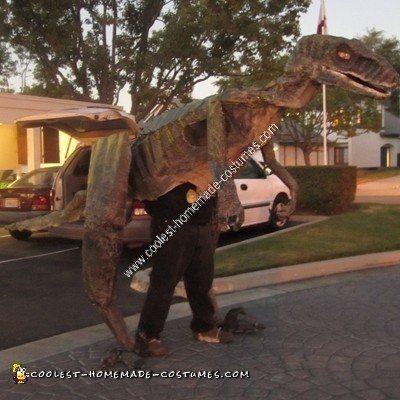 I began making this homemade Velociraptor Halloween costume idea around October 1st, I had a lot of extra pizza boxes laying around the garage and my mother was bugging me to do something with them. So I started making the shape of a Velociraptor head whilst watching TV. Before I knew it, I was getting more and more detailed with the head that I decided to not only finish the head but that I should make the body as well for a Halloween costume. I spent up until Halloween day finishing the costume.

After using up all the pizza boxes, I went over to places like Sams Club and Costco where precious cardboard was just laying around for free. I used a drill and zip ties to hold most of the cardboard together, but for other parts good ol’ fashioned duct tape worked really well.

All together I would spend about 50 bucks for the costume. Most of that being on the tape. I started thinking about the skin and what I would be using to get that nice dinosaur texture. I looked around for something light, but moldable. At Home Depot I discovered Gap and Crack foam. It was a foam in a can that I figured was worth a shot. It worked out very well, but the stuff is a nightmare to remove from skin and impossible to remove from clothes. I used a dremel to carve in the scales.

Finally I used acrylic paint on the dried and hardened foam.

I could not transport the costume to the west Hollywood Halloween parade in one piece, so I designed it to be “some assembly required”. It took about 15 minutes to assemble the pieces.

As for now the costume stands in our garage as a constant reminder to my mother to be a little more specific about what to do with the empty pizza boxes laying around in the garage. 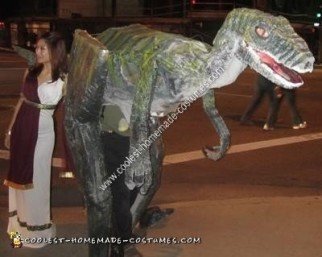 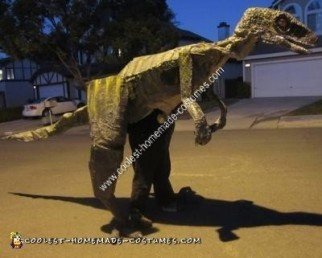 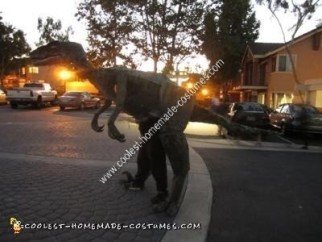