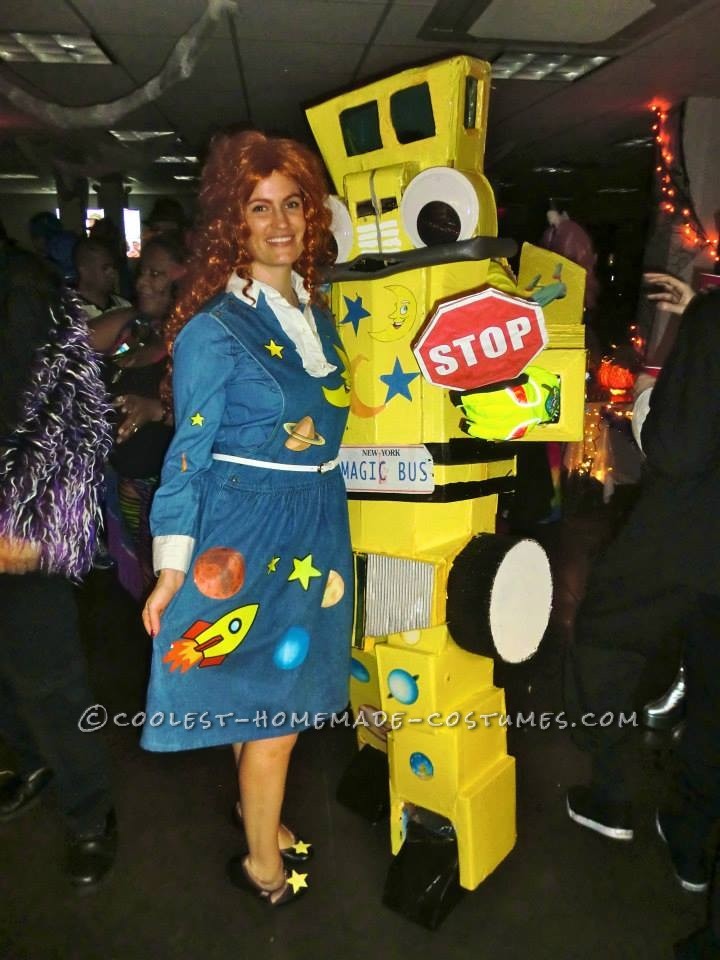 We always went back and forth for Halloween and this year I thought the best thing would be to compromise. So I told Laura, this is your year and whatever it is you want to do we will do it. But I told her back in June we would need to start now and put our best into it. During the last 5 years every Halloween has been a mess or a misfire. One year because of a fight Colonel Mustard was drinking alone while Miss White hung out with her friend Carmen San Diego. It has been important to us all year to make this Halloween really work. But it was more important to me that she was happy, I wanted her to have the Halloween she always wanted.

She wanted to be a Miss Frizzle and the Magic School Bus for Halloween. The first step was re-watching some Magic School Bus episodes. I also did not want to be a rather large magic school bus and so I hit gym hard for a few months. While I did miss my goal of getting down to 200 pounds by Halloween, I did make it to 215, which was a loss of 50 pounds.

Shopping for the dress and wig were tough because when your girlfriend shows you something and says ” what do you think” as a boyfriend you’re thinking..this is a trap. So instead of starting with a pre-made dress, she started with a denim jumper that she found in North Carolina in August. I wasn’t sold on it at first but she really made it work. She found a denim shirt that matched the fabric and was able to sew on a fake collar, cuffs, and button bib to match Miss Frizzle’s. Then, we were able to get access to a t-shirt heat press and press on space cartoon detail to the dress.

Laura then found Saturn earrings online (the devil is in the details!). As far as the hair went, she had to search for the biggest, reddest wig imaginable, so she ended up buying a wig for the character from the movie Brave. She tested the wig on the cat and I guess that sold it. Last but not least, Laura used some short heels she had, cut out star shapes from note cards, and then found some duct tape to fasten it to the shoes. Even if you don’t think you need duct tape, just get it. At some point, you’ll need it.

We both realized there is a learning curve, if you don’t know how to sew, find someone that does, teach yourself or find a cheap tailor. Also investing in a first aid kit isn’t a bad idea.

While she continued to gather her items upon our return to NYC I started seeing tons of items I ordered show up. Having a roommate that works from home and who can receive packages is a Godsend. I always thought it would be fun to build a costume, I thought it would be quick, insightful and above all painless. Literally and figuratively I was wrong, especially about the pain. About an hour ago prior to finding this website I was using nail clippers to pull out glue which had healed into one of the many burn wounds I inflected on myself.

After the gym in Manhattan on the way to the 59th st train station I would hit the stores for some supplies then take an hour train ride to Brooklyn. As odd as it might sound it was the most convenient set up. Apparently staples doesn’t have the thick double sided cardboard one needs for such an under taking.

I keep running out of glue sticks, no one tells you how fast they really go but picked up 10-inch sticks with about 30 to a box, I love those things. The first time I burned my hand I freaked, tried pulling the fused glue from my skin, which just pulled off my skin. By the 4th or 5th burn I just started rubbing it on my jeans so as to get, as much of it off as possibly because I knew it was better to let the burn blister, then to have another open wound. As they healed I would cut off the top layer of glue and skin.

I took over the living room and there was cardboard everywhere for weeks. I just started carefully scrapping off the yellow paint from the floor today. Because no matter how careful I was it just would happen, a burn, paint on my clothes, paint on my cat and my futon just didn’t survive.

I loved finishing a part and sending Laura pictures. She would get so excited with each thing I did and I loved seeing how happy she was and despite design blocks I pressed forward. Figuring out how to make it move with me was tough and each time I built something I spent an equal amount of time modifying it. I used Velcro in the legs to keep it tight and some bolts as a hinge for the knees to bend. I sort of gave up on sitting and figured a door in the front would be a useful part of the design.

The toughest part was making the arms and chest work. But I was really proud of the head piece because I could see really well out of it and the first pair of googly eyes I picked up were really big and I couldn’t see out of them. When Laura saw the head part it was the first time in a month and half I didn’t get that happy smile.  She didn’t like it and didn’t approve but she didn’t push the issue until the day of the Halloween party we were attending. She didn’t have the heart to tell me to redo it.

The party was in 5 hours, friends from out of town were on the way to my place and so I just started from scratch. The end result was tough to wear on the inside since I didn’t have time to test it and modify it. I held the head the entire way there just to let the paint dry. But its the NYC subway, people didn’t even look twice at all the giant yellow body parts piled up in the subway car.

We attended the New York City horror meetup party on the sat before Halloween and it was a hit! From the second we walked in the door people were freaking out and yelling Miss Frizzle! I don’t think Laura stopped smiling. We won first place and a few prizes, which included a walking dead lunch book, two books about various spy locations in NYC and a video game! People would not stop taking pictures of us and were just amazed at all the details. We danced, I tired to do the shuffle and used my stop sign to clear a path when needed. I think what really impressed was my ability to move and her dead on costume with great details.

We also managed to walk in the NYC Halloween parade for a few blocks until the end of the parade. From the second we hit the street people were yelling at us and stopping us for pictures. I couldn’t believe it. We watched the parade for a little bit before finding a spot to jump in. When we were behind the crowd we didn’t hear them yelling or cheering for anyone. But once we stepped in it was chaos. Some college student ran up to Laura/Miss Frizzle and gave her a giant hug like she found her long lost mother,  ( taking her by surprise almost knocking her over) and said “YOU WERE MY CHILDHOOD!” . But that wasn’t the only hug of the night, who knew the Magic School Bus was a babe magnet. Miss Frizzle had a few cat calls as well. Something about being a red head.

The reaction from the crowd in the parade and just walking around the city was amazing. Aside from maybe one or two creepy guys that really loved red heads. People loved it and while some who in passing would start to call me Bumblebee or a Transformer, you could see their face change as they realized who we were. If I had a dollar every time someone said “Holy s@#t it’s Miss Frizzle and the Magic School Bus I would be rich! They would then turn around and stop us for a picture or just stop to tell us how much the show meant to them.

The NYC parade was worth every minute. So many people appreciated us, stopped us for pictures and told us how great we looked. As we walked around after the parade in the crowds of hundreds of people it was the same great reactions and tons of people still calling out to us on the street. A couple had to stop us because their dog was so curious and shocked at our costume. The dog’s owner also told us that we were the only costume the dog had any type of reaction towards!

The biggest lesson I learned from this whole experience was first doing some research, then drawing out a design if it’s something complicated. Laura had a mental list of the basic items she would need and started there. Once you gather all the basics you think you need then as you start to create then you can start to add new elements. For my costume it was important to have a work area and storage area. This all includes having a set of clothes you can ruin and plastic to ensure you cover items in your home. The most important thing is time, with each part I had to test it against each new part and then modify both. You also have to take into consideration where you are going, what you will be doing and how you are getting there. I kept an empty beer bottle as part of my supplies and would continuously test to ensure I could drink while in costume. I started with the legs up and I think that’s important because if you can walk, you’re halfway there!

Overall, it was an amazing experience and neither Laura nor I will ever forget walking in the parade, walking around union square and getting to feel like celebrities for the night! 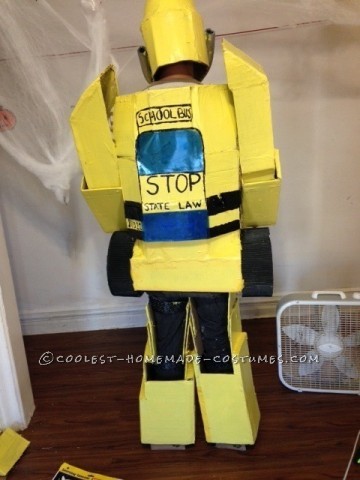 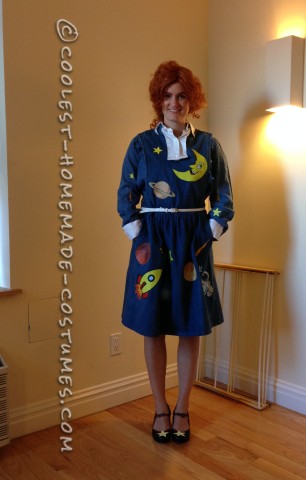 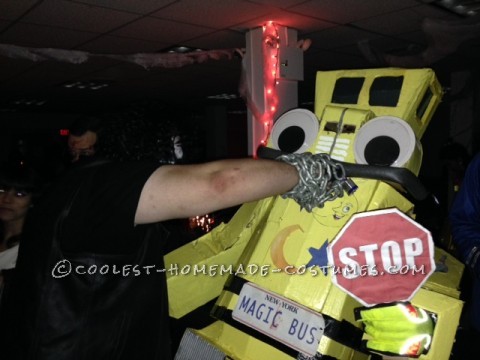 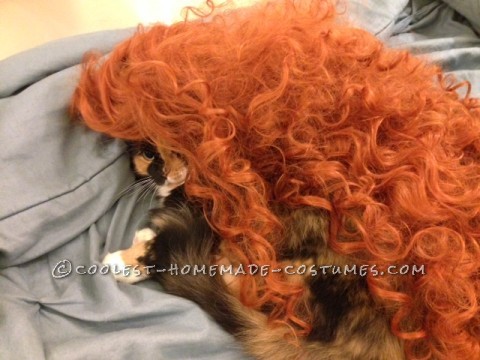 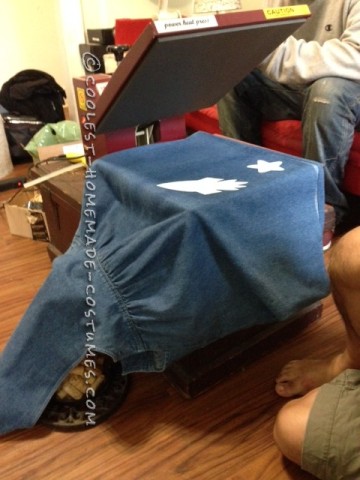 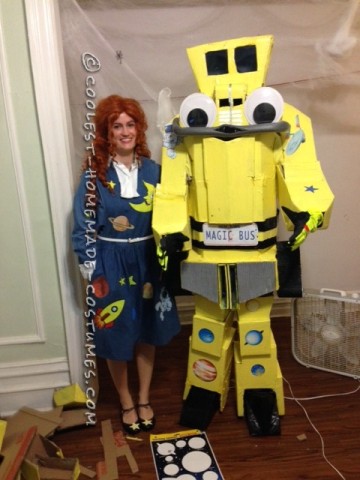 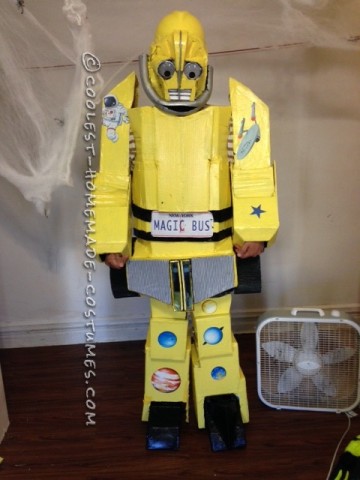 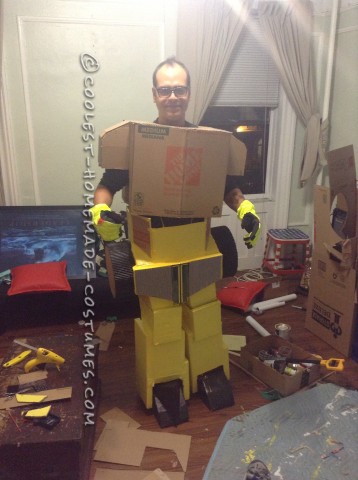