I struggled for weeks trying to decide what to be for Halloween. Then my roommate and I came up with a fabulous idea. Since I was going to be driving a bus on Halloween (for my job as a bus driver), how perfect would it be to be dressed as Ms. Frizzle from the Magic School Bus while actually driving one?!

I found the perfect fabric at Wal-Mart that had planets swirling all across it. I didn’t have a sewing machine, but I did have some needles and thread for whenever I popped a button off a shirt or pair of pants. I spread the fabric out on the ground, laid flat on my back across it and asked my roommate to trace me (with some wiggle room included). I cut out my figure from the fabric and traced this piece on the planet fabric. Next, I just started hand stitching the two pieces of fabric together everywhere except at the neck, wrists, and legs. I left those areas open. Once I had hand sewn the dress, I decided I needed some color and little more feminine features on the dress. I hand sewed green bias tape along the neckline and sleeves. I used the remainder of the bias tape to make a green sash to tie in a bow around my waist.

Next, I sprayed my hair with orange hair dye. We’re talking BRIGHT orange. I definitely got orange dust all over my bathroom, but it was totally worth it. Then, I freehanded two colorful pictures of the sun and taped them to the tops of my shoes. I made a sign to go with my costume saying, “Welcome to the Magic School Bus” and taped it to my driver’s seat. It was time to head off to my bus-driving shift, but I decided to put on a tank top and shorts under my costume just in case my handiwork fell apart. Thankfully, it never did. As I picked up passengers throughout Halloween night, I received countless compliments. Some people even called their friends to tell them they were on their way and that Ms. Frizzle was driving them on the Magic School Bus much to the confusion of the person on the end of the line. :)

This costume was a blast – both in making it and wearing it. 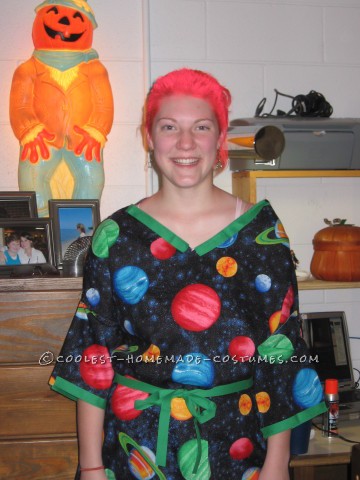 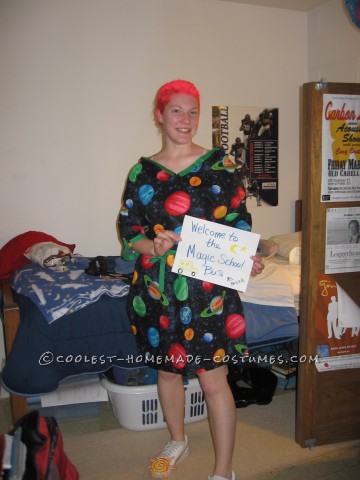