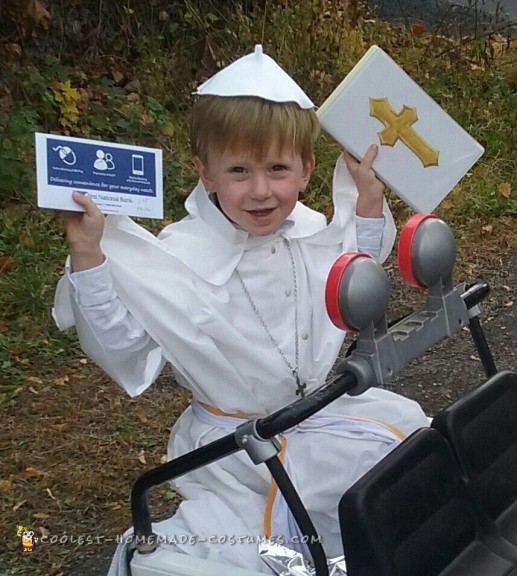 My husband actually thought of this.  When the Pope came to the area a month or so ago, my husband said that it would make a Great Costume Idea.  The only thing was how were we going to do it?

That is one thing with the two of us, if we put our minds to something, we can do it.

So what I began doing was a lot of research into pictures of the pope.  The great thing was, Pope Francis has a Great Smile and so does Colton.  Once I had an idea of what I was looking for, I went to Walmart, did a VERY LITTLE shopping, asked my mother for her sewing machine and got started.  Last time I sewed was in Junior High!  (My mother saw the pictures and said to me “WOW, I did not know you knew how to sew!!!”).  Made one more stop for 2 more small items, and with the thoughts of our Cousin and my Mother in Law, I created the toddler Pope costume!!

I don’t think my husband thought that I was going to pull it off in time…  Because he kept telling me that if I could somehow make a costume, he would work on a Pope Mobile.  Well the day of our Halloween Parade, I got the costume finished….  So now the pressure was on!!  Well I must say, he worked wonders!!!  He went to his mother’s and found 2 OLD jeeps that were not in working condition, he swapped quite a few things, turned the roll bar around, put a platform in the back, painted it and welded a handle on it.  I went out and within 2 hours, I was shocked, it was PERFECT!!!  So then I continued to look at more pics and noticed that on all the  Pope Mobile’s, he has he license plate SVC1, so we had to include that!!  It was awesome!!

One of the GREATEST things was that when we told Colton who is not even 3 1/2 yet that he was going to be the Pope, he says to me, “Mommy I don’t even know what the Pope does.”  So I explained to him several things, the Pope loves everyone, cares for people, blesses them, says Prayers….  So he says to me “Mommy, you always say our prayers, I only know how to say AMEN, should I say that!?!”— I looked at him and thought that was just PERFECT!  He is such a little sweetie and was PERFECT for the Part!!

I sewed the material to make a Pillow Type Pullover, hand designed the Cape and took a few sheets of paper and made a stiff Collar, hot glued a few buttons on the front, hot glued the cross Ribbon down the back of the cape, cut out a piece of felt and somewhat formed to fit his head and hot glued it.

The best part was Colton, he was sooo nervous to go to the Parade, I told him to wave to people, that is what the Pope does, he was shy and said he didn’t think he could.  So when we reached the parade, it was just starting, I told him if he waves to everyone, they would throw candy and treats, so he waved to the Fire truck and they did, so that just made it, he began waving to everyone, JUST like the POPE!!!  It was sooooo AMAZING!!!!

Just that it was TOTALLY created by our thoughts, I don’t know how many people asked where I bought it….  Even our cousin who had made all of her children’s costumes and some clothes, when I asked her about making it, she was funny, she said to me “Do you have a pattern”—  my reply was a Big NO, just all my thoughts and ideas in my head from looking at soooo many pictures!

I just truly wanted Colton to be recognized, not only was his costume very creative, ALL hand made but he just played the part sooooo well and was SOOOOO very proud.  He actually won 1st place in our town parade, then WANTED to wear it to his NEW Nursery School he just started!!!  He is soooo cute, EVERYONE that has been seeing it told him he should have been on the news where the President was, he would have WON…  And he just tells everyone that he LOVES the POPE!!!!  Amen!!!  LOL!!! 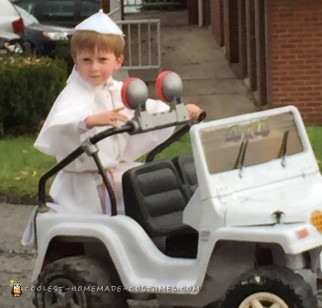 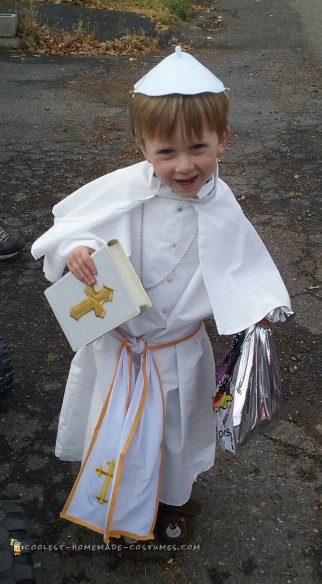 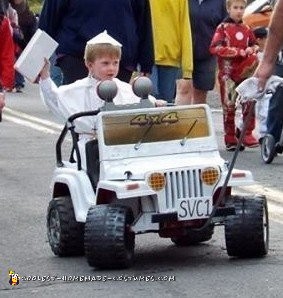