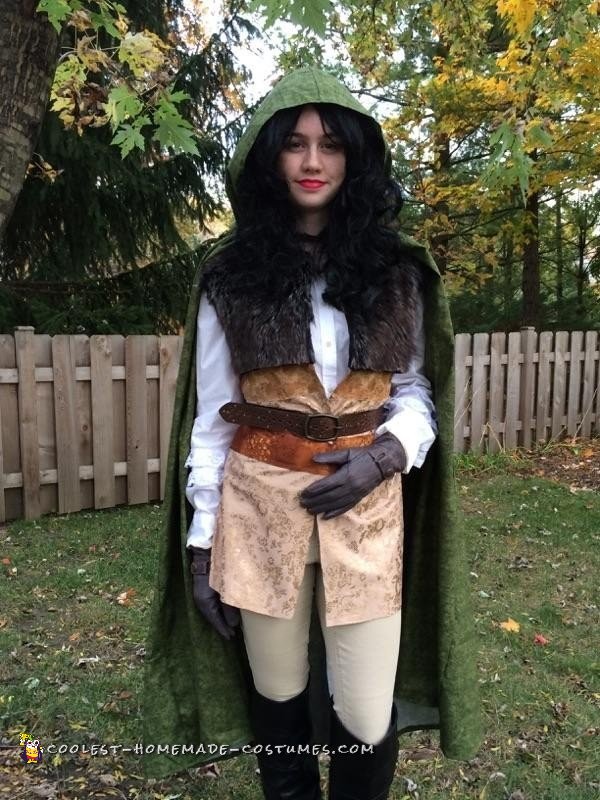 So, when I first started this endeavor, my plan was to look for an already made woodsy costume at Party City and just add fur to the collar. I thought it seemed simple enough. Boy, was I wrong. See, for anyone else, they would’ve just taken one of the costumes and made it look as best they can. Not me, I wanted it to be exact, which I know is unrealistic because those costume designers have way more money to work with. Therefore, the costume search continued.

After 3 or 4 stores, my dad said we should look online to see if anybody is selling this specific character’s costume. Bingo, he was right, a cosplay company was selling one, but when I saw the price, it was $100.00. Then I started looking at the costume realizing it wouldn’t be that difficult to make and it would be much more fun if I made the costume myself.

The next day, my mom took me to Jo-ann’s Fabrics, and we picked up everything. I got a green cotton fabric for my cloak, a beige, fake suede material for the vest, some strips of cotton material with different patterns on them, and a large piece of fabric covered in faux animal fur.  Finally, we headed to Target to pick up black boots, and then stopped at a saddlery to buy leather riding gloves, to look as accurate as possible.

The first thing I sewed together was the beige material to get the basic vest. Cutting out this material took some time and I had to adjust the pattern since I knew the collar was unnecessary. Once the vest was securely made, I started to add the strips of patterns. This took just about as long because I had to measure how long they needed to be and then sew it on the fabric without sewing the vest shut. These two parts I got done during the weekend, but then school came up again, so I had to wait until the next Saturday when I had free time to continue working on the costume.

The weekend came around again, and the next part I worked on was probably the most frustrating, the fur. Every single time I cut the fur fabric, it would shed onto my clothes, the vest, the table, and the floor. Also, because it was so thick, it was difficult where the vest stopped, so I had to estimate the amount of fur I needed. After a while, I sewed that on, but again, since it was thick, the thread got bunched up a lot. Onto the cloak. So, the material for this cloak was so long that it was falling off my dinner table. Once I cut all the pieces out, I began the same process. Altering the instructions to what was necessary, pinning all the pieces together, and sewing it. After all the sewing, I still wasn’t done! I had to go back and hem the cloak so no frays would occur. Then I needed to put the toggle on. Since this was made of leather it was very difficult to hand sew and I eventually just used my machine slowly.

Walking into school was the moment of truth. Even though Halloween wasn’t until Saturday, everyone who wanted to could dress up on Friday for Halloween. Now, this caused me a little of an issue earlier in the week because in gym we were doing our swimming unit. Yep, Monday, Wednesday, Friday we were in the pool. I really didn’t want to ruin my costume by accidentally getting it wet, so I figured I could just take off the cloak before I went to gym class. I thought that was an easy solution. Then later, I realized the pants I’m wearing are supposed to resemble riding pants, so they’re really tight. There’s no way I could get back into them with damp legs. I weighed my options and eventually decided to skip swimming on Friday and just make it up at open swim on Sunday.

Finally, Friday came. This is what I was waiting for. I had worked so hard on this costume and was excited to show all my friends and classmates. Because I wanted to look amazing, I got up an extra hour earlier. I put on my make-up, my mom sprayed my hair black, and I got dressed. When I got to school, I went into one of the bathrooms to make sure I looked good in the mirror. As I was adjusting my cloak, one of the toggles ripped off. It broke! I called my mom trying to think of a way to fix it, but then realized it probably would’ve been too difficult to work with during the school day anyway. So, I moved on.

School started and by 3rd period I was feeling a little better about the cloak. Then I went into the bathroom and saw the black spray from my hair had gotten on my face, my hands, and my neck. I tried to wipe it off, but it was determined to stay on. I was stuck. I had no idea what to do, so I improvised. I started evening it out all over my face and neck. That way, I just looked more realistic, like I had just gone running through the woods. I told people it was supposed to be dirt, but most people figured that out on their own. As I got home that day, I found a pin in the fur that had been in my vest for the entire day and I never even noticed it. Good thing no one hugged me or I might have gotten impaled!

When I first showed my parents the finished costume, they couldn’t believe I sewed it all on my own. I mean, I didn’t really have a choice since my mom doesn’t really know how to work the machine yet and I don’t think my dad has ever sewn. They were ecstatic and my mom said she was bragging to everyone at her work that I made such a cool costume. One of my friends was trying to guess my costume in Lit and soon everyone in the class started shouting out guesses. To be honest, it was a little overwhelming. I hardly get two glances and now the whole class was looking at me. I heard guesses all the way from a pirate to a female version of Prince Charming. That was the closest guess since in the show Snow White is married to Prince David, but she calls him Prince Charming.

Later on, my gym teacher was surprised I made it myself and told me he knew how to sew since his mom was a home ec teacher. In my last class of the day, my teacher thought I was Inigo Montoya from The Princess Bride. You know, the guy who says, “ My name is Inigo Montoya. You killed my father. Prepare to die.” to the guy with six fingers. Once I looked him up, I have got to say I agree, I mean without the fur, the costumes resemble each other a great deal. At the end of the day, as I was walking by, a girl told me, “I like your dirt”.

Finally, because of the fiasco of the black hair spray, I decided for Halloween night I would just wear the black wig I wore when my dad took pictures a few nights beforehand. Halloween night was kind of a bummer though, it was misting rain all night, humid, and cold. Pretty much the grossest and uncomfortable weather combination you can think of. However, my friend and I still decided to go trick-or-treating.

As we were walking around, we met up with some old friends from elementary school. For the first five minutes, she didn’t even recognize me with the wig and the makeup and the cloak. Again, she thought it was amazing that I could make it myself. When we got back to my friend’s house, a mom who was there saw my cloak and asked where I got it. When I told her I sewed it, she asked if she could borrow it in a week or two for a play her daughter’s in. Her daughter is playing the Wicked Witch of the West, but apparently she supposed to be an edgy witch, so she thought the green cape would be perfect.

Though the weather didn’t cooperate as well as I had hoped and my costume got a little wet in the rain, I had a great Halloween dressing as Snow White from my favorite show Once Upon a Time. I love Once Upon a Time because they interconnect and add twists to the classic fairy tales we’re all so familiar with. It also gives perspective when you see the backstory of the villains. The entire series just keeps you thinking and predicting how each event will affect every little character, and that’s why I just love it so much. 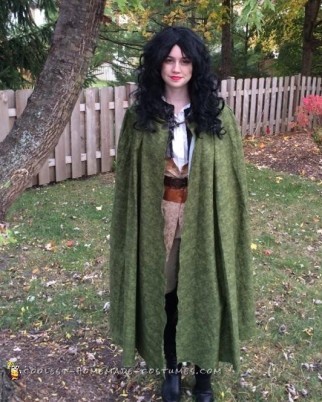 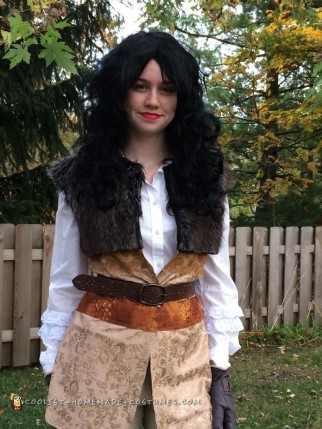 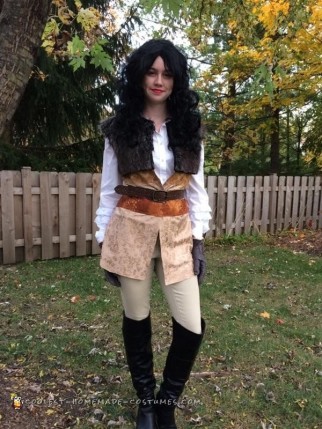 Once Upon a Time Rumplestiltskin Costume