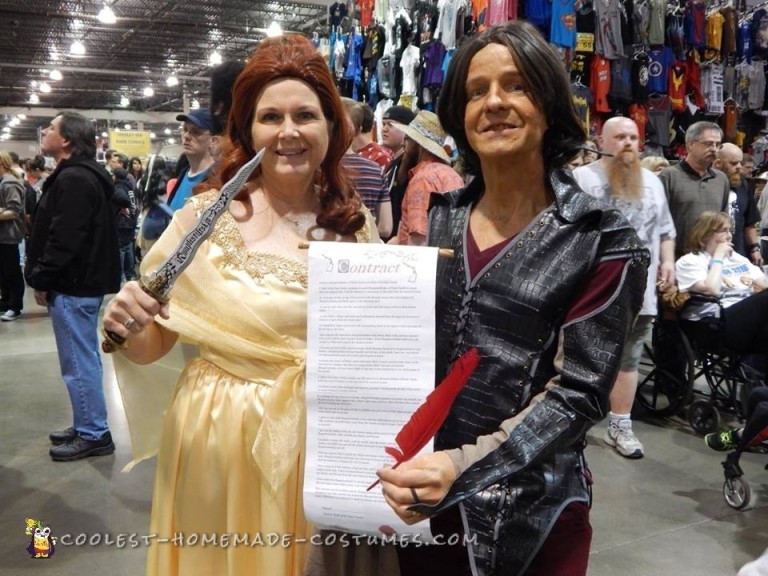 I love Once Upon a Time. Rumple is my favorite male character. So my wife and I decided to create the first season costumes of Belle and Rumple for the next comic con. It turned out to be a labor of love for me to create Rumple.

I started off visiting the used clothing shop. I was able to find a shirt and pants in the cranberry color I needed. After some alteration I had what I wanted. The next step was boots. I had a pair of boots but needed to add a buckle. So I cut some hard plastic and painted it silver. I also picked up a used belt for leather and hot glued it to the boots. Ok so the cheap part was done. I bought leather from JoAnn for the boot covers. I created a pattern for the boot covers and made some test fittings out of old fabric. Then I made the boot covers with the leather. I found the eyelets on E-bay and the leather lace at Michaels. A hole punch and eyelet tool became my best friend. This costume has hundreds of eyelets. Each spaced about an inch apart.

The vest was a challenge. I bought a vest pattern and modified it. I made several test runs with the paper patterns before I made some scrap fabric vest. I did not want to screw it up with the expensive stuff. The gray binding I made from cutting fabric strips about 2 in wide. The Alligator fabric was a big challenge to find. JoAnn has the fabric I used for the arms. The vest has a different pattern. I found it online. The shoulder/collar is separate from the vest and attached under the arm, to the sleeve and at the neck. The collar was a pain to make. The rows needed to stand out on the back and shoulder. I started by sewing tiny lines to create shape. After that I slowly cut the lines open on the back side a little at a time and added a layer of glue to hold the shape. I think hot glue would have worked faster but was harder to control and not very forgiving.

The sleeves were sewed to the Alligator vinyl after I cut 3 slits near the elbow and a hole on the shoulder. There was a reason for this. The arm needs to breath to keep cool. This is a hot costume so make sure to punch tiny holes in all the vinyl. Try a tack, thick needle, safety pin anything to make holes to breath. The holes don’t show so don’t worry. You will thank me later. The first time I wore it I died from the heat. It was much better after the holes were added.

I found the dagger on E-bay and made my own contract. Feathers can be found at Michaels. The wig was from eBay. I painted some of the hairs gray to make it look older.

It was a big hit with Oncers at the con.

All magic comes with a price! About $200 when I was done. I spent 3 months making it.