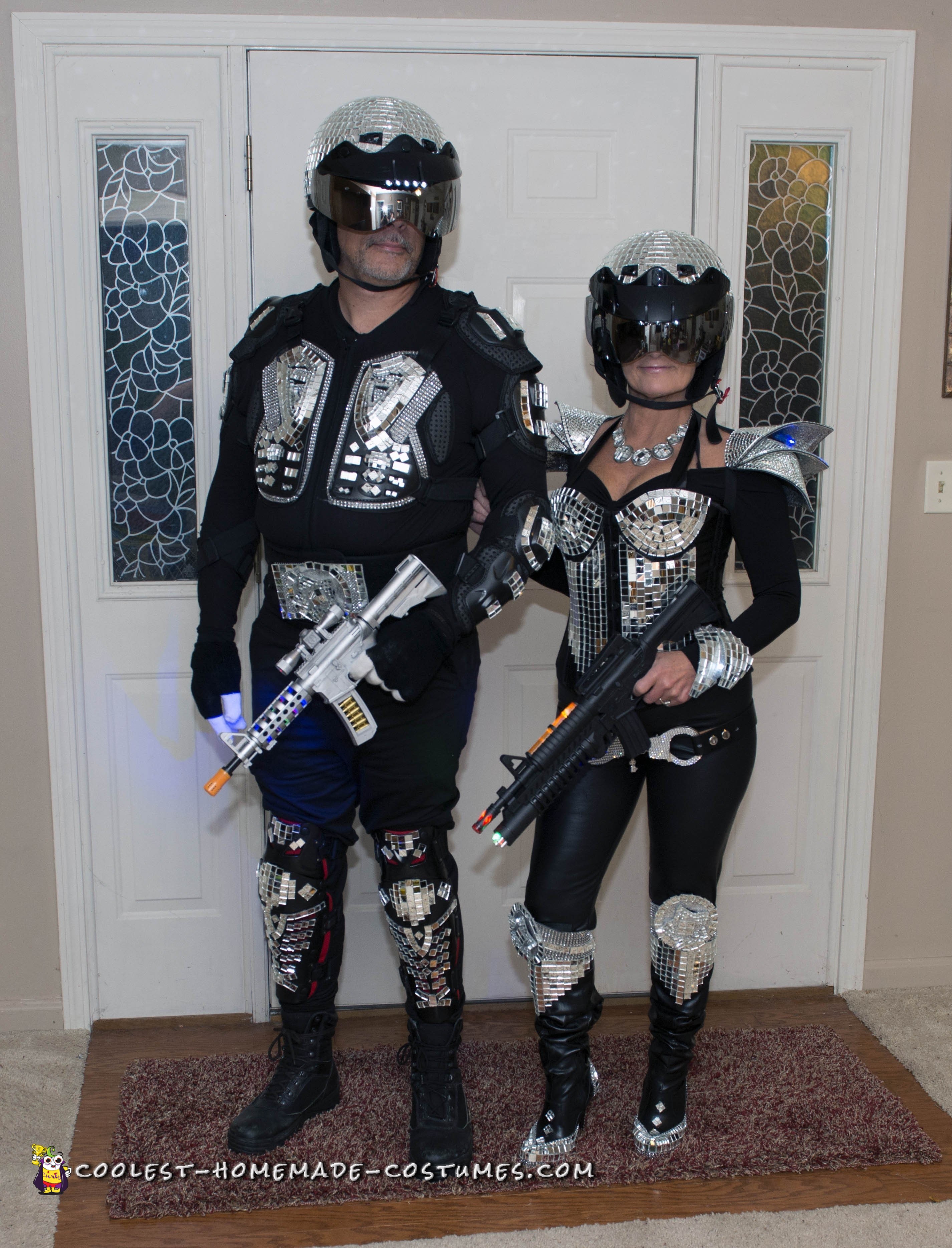 My husband and I always try to create our costumes as a couple. We do everything together so it comes natural for us lol. But it does make things a little more challenging. I wanted to create something that would combine the past with the future to keep with the theme for the local contest we were entering  which was nostalgia. I love Bling! The sparkle and shine is so beautiful. So with that in mind, I started searching the Net. Thats were I found the Mirrored Tiles. That got me started. Wanting to  bring the Retro and Futuristic look together, I decided to design the costumes using the mirrors and accenting with rhinestone banding. I was really getting excited at this point!

I had spent my life in the art world, and had always loved painting and creating things that were unique. I dreamed of becoming a designer one day, but due to caring for a chronically ill daughter for several years I put my ambitions on hold and became a Photographer. Which enabled me to  set my own hours and be there for my daughter. I finally got my dream this year and was turned loose to create and do my own thing. Here is how it went:

After a lot of thought and discussions, we  decided the costumes were going to be something unique! Something not from a movie, but our own creation! “Disco Star Troopers”! We wanted to base the costumes on the bling of the mirrored tiles. Letting the tiles  Shine and catch attention. So I went with basic black underneath, to highlight the tiles and not detract from them. I started searching for the perfect base to create our costumes. I checked our closets first.

In mine, I found a pair of boots I had pickup on clearance the year before. They had a fold over cuff on them similar to pirate boots, which made a nice flat surface to apply the 1/2″ mirrors. For the round circles and stars on the front of the boots, I bought round and star shaped craft plastic at Micheal’s they looked like a screen but were made of plastic. I covered them with glitter covered craft squares to add more shine, I also found the glitters squares at Michael’s. The plastic pieces came in a bag of multiples. I applied the mirrored tiles over the glitter layer to make even more bling. Then attached them to the boots with industrial strength Velcro. On the bottom of the boots, I used a combination of 1/2″ and 1/4″ mirrored tiles and added some lightweight rhinestone banding( on cloth) that I picked up at a garage sale.

In my husbands closet, I found his black lace up work boots and added them to our costume collection. For the costume tops, I bought a basic black lace up corset for me and a Motocross Body Armor Protective Jacket for my husband. His proved  to be more challenging. It was hard to get the tiles to lay right. But as I started, I created different patterns to accommodate the  design of the jacket.

I created his belt buckle out of the same craft plastic, lightweight rhinestone banding and glitter squares I had used on my boots. Then attached it to his jacket with industrial strength Velcro. My husband wasn’t to hipped on the idea of bling boots, so we decided on the knee protectors for him which I covered with mirrors. We purchased our matching helmets at a garage sale over the summer and ordered the mirrored universal visors on eBay.

I purchased the 1/2″ tiles with a cloth backing which made the process of applying them to the helmets and clothes a lot less time consuming. When I got to the upper parts of the helmets, the design became more rounded and the single strips of tile did not want to lay flat. I found that if I cut a notch in the cloth between each square it would allow me to lay the tiles flat on the helmets. I had to use a glass cutter on the 1/2″ tiles in a few places to fill in, but most of the time I could get the tiles to fit without having to use it. I bought a regular handcuffs and a leather belt at Goodwill which totaled up to$7.98. I purchased 2 sheets of self sticking rhinestones at the local Dollar General store $1.00 each and applied them to the Handcuffs.

I removed the original belt buckle from the belt and replaced it with the rhinestone handcuffs. I found a perfectly sized strip of self sticking rhinestones for the back of my belts at Michael’s $3.99. I lot better option then paying $30 and up for similar belts on the net. The arm cuffs were made using the same supplies and technique as the boot circles. I attached a strip of wide elastic to each cuff and used Velcro for extra support.

Once I got the costumes together, I  strategically placed LED lights (purchased at the local Dollar Tree) to show  case the bling and give the costume a Futuristic, yet, Retro appearance. Now my creation is complete, I am very fulfilled and am ready  next year.

The reactions of the people at the Halloween party was Awesome! Oh My Gosh ! we felt like Celebrates for the night! We almost didn’t make the contest for people stopping us to get a picture or have there pictures taken with us. It was so crazy and  a feeling that was one of a kind. To know that they were enjoying what I had created! and they were singling us out of  the over 17,000 people there. All I can say is wow!  We had an entire family pose with us, then take turns stepping out of the shot to get a shot for their camera. When we finally made it to the stage and the audience was asked to applaud for us. They went crazy! It was over the top! Yay! We Won! I felt like Cinderella in a Trooper costume . I didn’t want the night to end. I could tell by the smile on my husbands face, that he was totally enjoying it as well.

These  costumes are a very special part of a life long dream of mine and are only the beginning of the fun ideas I have a head now that my daughter (Daisy) is better. You see,her and I now have more  in common then just being mom and daughter. We share a set of Kidneys. Together we are a pair. 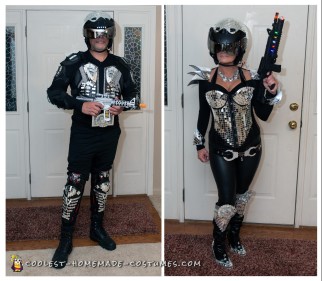 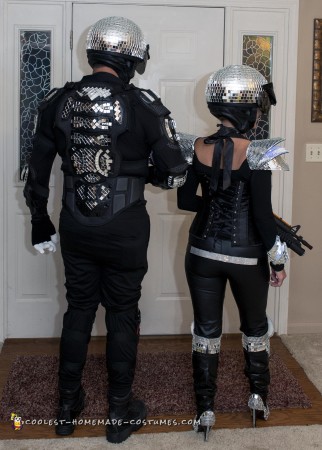