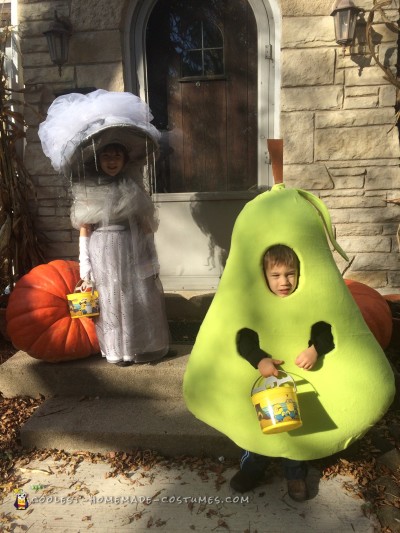 Last Father’s Day, while enjoying dinner out, our three-year old son announced to the table of strangers eating next to us that he was going to be a pear for Halloween. “Oh, that’s nice dear, a bear.” the elderly woman said to our son with an encouraging smile. “No, not a bear, a pear! A juicy, juicy pear!” our son confidently corrected her before turning abruptly on his heel and walking out to the restarant.

My husband and I exchanged bewildered looks and for that moment chalked it up to three-year old capriciousness and whimsy. As it would turn out however, our son, would not waver from this decision. All summer long, he would randomly inform strangers and friends alike of his penchant to be pear for Halloween. And not just any kind of pear, he would always be careful to explain, but a “juicy, juicy pear”.

As October approached, we started eagerly offering him other ideas and options for costumes: dragons, ninjas, cowboys- all roundly and emphatically rejected. Why couldn’t we understand? Finally, after a bout of alternate suggestions left him in actual tears, as our son wailed out his plea for, “a pear!” I turned to my husband and said, “You do realize you are going to have to somehow make him a pear costume.”

The first attempt by my husband did not go well. After three hours, he had a foam structure that more resembled a misshapen bulb of garlic or the cone of a spacecraft, depending on your angle. Undeterred, the second try was much better. He took a one inch thick sheet of foam and folded it in half like a piece of paper. He then sewed a basic pear outline with a thick needle and yarn so the open edge was the bottom of the pear. He then cut away the excess foam with an electric knife and, with my help, turned it inside out so that it puffed out to a more rotund pear shape. He was onto something.

After cutting and measuring holes for our son’s face and hands in the front, he used spray adhesive to cover the entire contraption in yards of pear-green fleece. It was starting to come together. The final touch was a stem carved from a scrap of foam and spray-painted brown. A matching leaf of wire and fleece completed the costume. Voila- a juicy, juicy pear.

Our son watched all of his costume’s stages and developments with quiet interest. When the great moment came to finally try on his finished costume, it was with the solemn air of an Olympic athlete receiving his hard-won gold medal. This was a nearly six-month long dream realized and he was stoic as he bathed in his pear glory.

Trick-or-treating as a juicy, juicy pear proved to have a few challenges. While it kept our son warm and snug against the brisk Wisconsin winds, steps were not his friend and the weight of it slowed his house-per-hour candy rate. However the sight of a pear waddling down the street delighted most everyone we encountered and a few full-size candy bars were tossed into his bag in appreciation. It was something different and refreshing, no pun intended.

Our son did go on to win second prize at a children’s costume contest at the local botanical garden. His six-year old sister would like everyone to know she took home the first place trophy as an elegant rain cloud. When he stepped onstage to accept his prize, our proud pear fell flat on his face and needed to be hoisted to his feet. He then did a little celebratory pear dance to the delight of the crowd. I mean, let’s face it, a dancing juicy, juicy pear is a pretty charming thing. 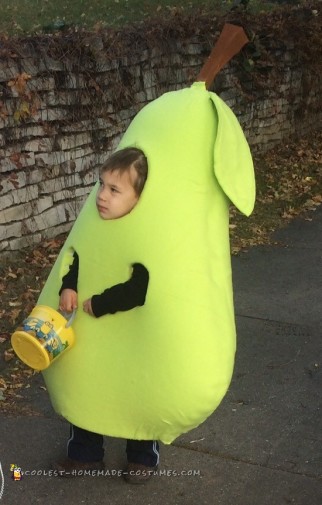 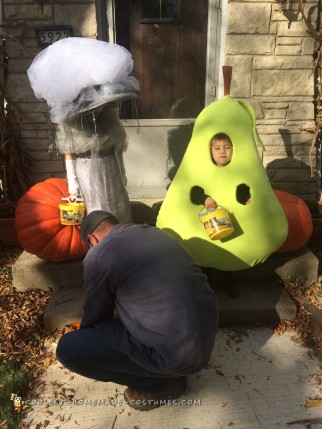 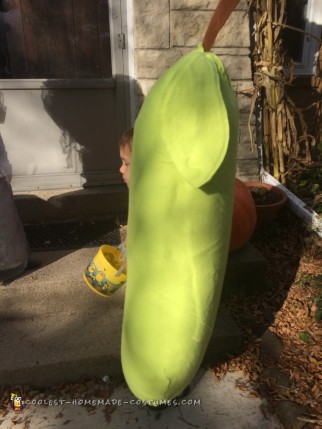 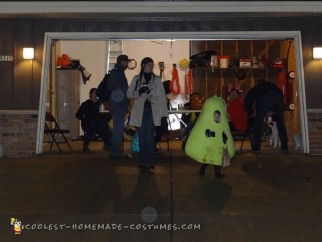 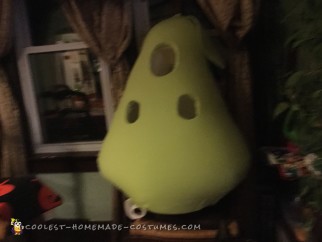