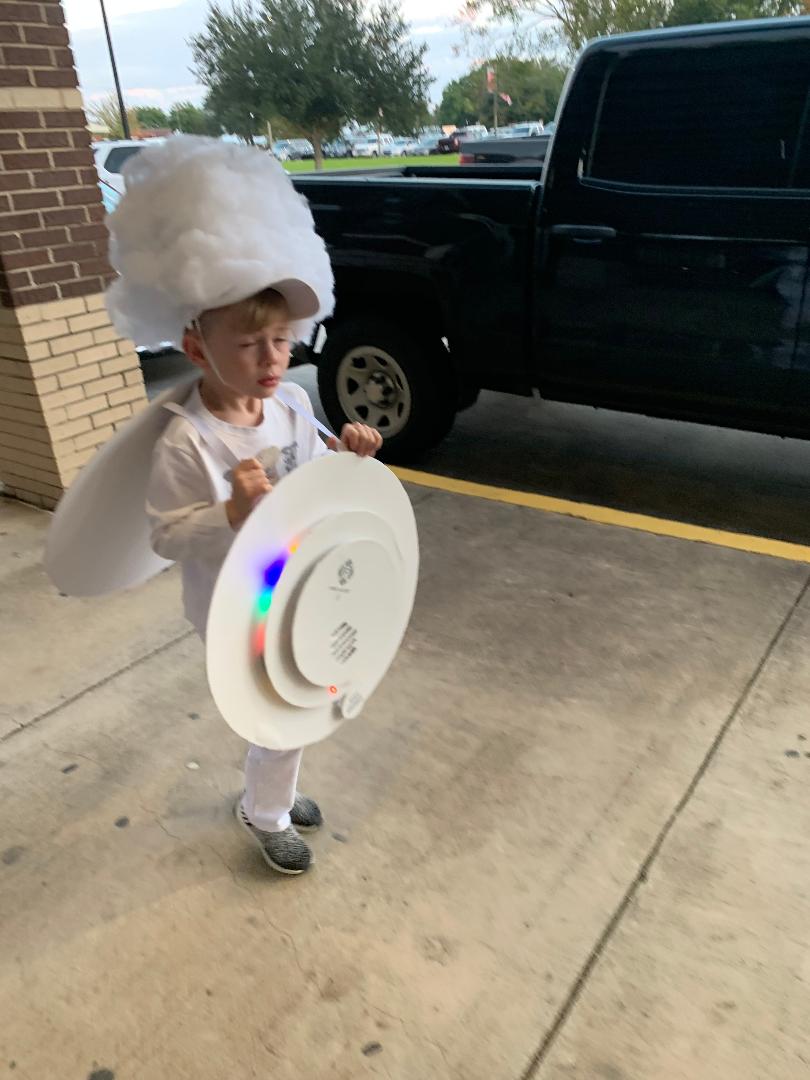 Since my only child was born, I have taken great pride in brainstorming, designing, and executing his annual Halloween costumes. I am by no means a seamstress, so I used whatever skill set I am able to muster, to get it done and hopefully successfully. It has become quite the tradition for us to select costumes that are silly, fun, and it often turns out to be something that no one has seen before, at least in our parts – Houston, Texas. So in the last few years, he has been a Roma Tomato, Romaine Lettuce, and this year – A smoke detector.

The idea came about in early September, right after we commenced Cub Scouts for the semester. We worked on a home safety adventure badge of some sort during our den meeting and had to follow up with a diagram of our safety measures at home. Obviously, that meant that we checked the fire extinguisher and the batteries on all of the smoke detectors in the house. We have a two story home, so we also role played how to use his extension ladder that Santa brought him the Christmas prior, so if a fire were to occur – he could get out safely and confidently from his bedroom window.

Once we settled on the costume idea, we reviewed several different brands of detectors to see which one we thought we would be able to construct and would be comfortable wearing at school for the annual character parade. And of course, which design would not be too hot trick or treating in the evening. We are in Texas after all!

Most of the supplies we already had in the house but we did have to get a few white foam boards from the Dollar Store and some aerosol glue for the smoky hat. I cut the foam boards into circles and used cut pieces of foam to add height to the various layers. I then cut elastic to secure to the boards to fit comfortable over his clothing – all white to allow the smoke detector to meld into place.

I found a small metal grate of sorts that my husband wasn’t using in the garage and secured it under a small hole I cut into the top board. This would serve as the speaker for the smoke detector. I also added two lights, one red and one green, to showcase where the battery and on/off switch would be on a real smoke detector.

Lastly, we downloaded some additional images of the branded smoke detector we chose, and using my silhouette vinyl cutting machine, I designed, cut, and applied the words, symbols, and logos to the board.

The most fun part of this project, but also the most difficult was the smoke hat. I used an all white baseball hat and cut long and narrow pieces from the foam board and attached them with my glue gun to the sides and back of the hat. Then, using pillow filler and aerosol glue we stuffed and styled and positioned the filler to look like a billowy could of smoke.

After letting the initial glue coat dry, we generously supplied a second and third coat. When all was very stable and dry, we used black spray paint to give it the smoldering look.

What you aren’t able to see and what I can’t find the video for, is a small Olympus recorder that was placed into a small, homemade pocket attached to the inside of the smoke detector inner board. It had recorded segments of an annoying alarm sounding from a legit smoke detector.

This project took quite a bit of planning and executing. But, my son was so thrilled to tell me that all of the 4th and 5th graders watching during the character parade told him that his costume was the BEST and SO COOL. So not only did we bring silliness and joy to his classmates, but he and I had a wonderful time crafting together and ending up with a marvelous, one of a kind costume!