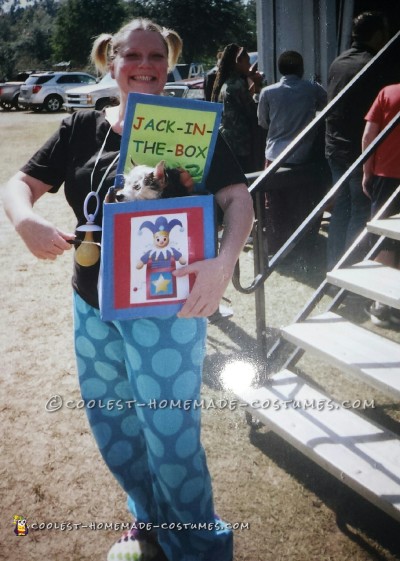 Since my rescue dog “Pixel” does NOT like to dress up for Halloween, I normally let him off the hook. Every year (he’s 6 now) we go to the Dog-O-Ween contest so that he can play with all of the other dogs, and mommy can see all the cool costumes. This year I had an idea of a way we could enter without COMPLETELY torturing the poor boy. By making him a Jack-in-the-Box costume, he could sit in comfort (I put a little bed in the bottom) and not have to be covered in some uncomfortable get-up all day!

I put the hat and collar on him just as we were headed on stage, so he only had to deal with those for a couple of minutes and made it through just fine. The costume was so easy to make and only cost me $12 (for the collar, hat and large pacifier). All I did was search for images online and print them out. I used painter’s tape to make borders on each side and taped them to a used shipping box. Finding something to make the crank was a bit tougher. I scoured the house and finally came up with the idea of using one of my fondue forks. I bent it with pliers to make it look like a crank and then shoved it in a hole that I made in the side of the box. Of course when I go to use my fondue set one day years from now, I will be wondering what happened to the fourth fork. LOL! I ended up being able to turn it just like the crank on the real toy.

To top off the costume, I decided to be part of the fun and dressed as a toddler in pigtails, jammies and big fuzzy slippers with colorful hearts on them. I also wore a large pacifier around my neck.

In the end, we had a great time and I think it turned out pretty cute for next-to-nothing in cost! I’m attaching 3 photos because in the one where you can see us both, you can’t really see his hat and collar from that angle. The other picture shows Pixel in his car seat with the hat and collar on (he had to wear it for just a few more seconds for mommy to get a good photo). You can see how thrilled he is to be wearing it. LOL! The additional photo just shows how each side was different – different color backgrounds and also different photos on each (stars and stuff) as well as a better view of the fondue fork “crank.” 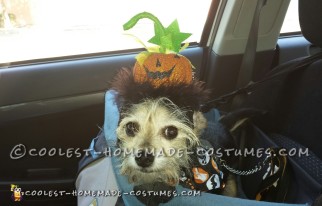 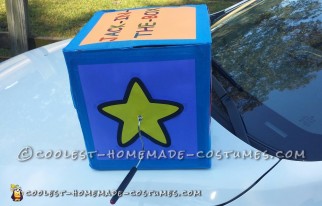