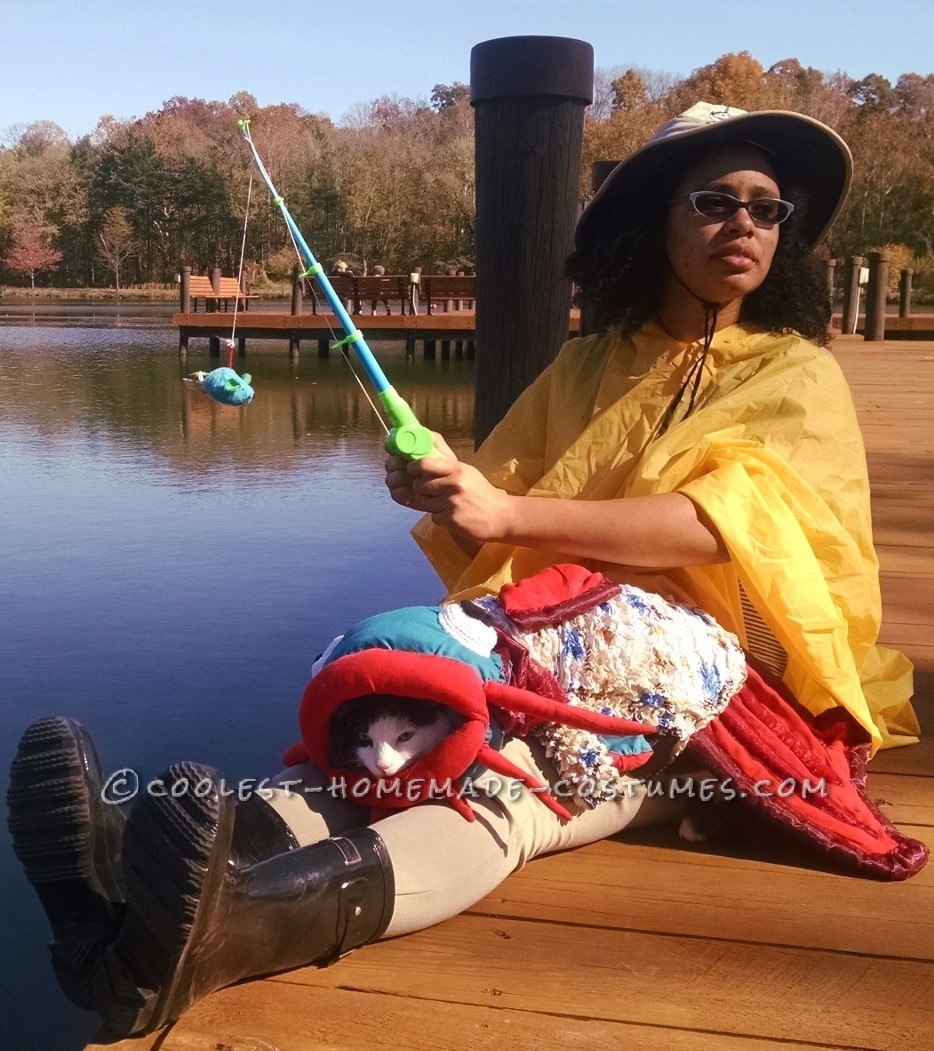 My cat, Nero’s favorite toy happens to be a fishing rod with a stuffed mouse as the lure, so I was looking through my scrap fabric and I found a discarded shirt that was made of strange fabric that looked a little like scales. I decided right then and there that I should turn him into a catfish so that his toy would be an even better fit!

After a couple all-nighters and about 50+ hours of work spread out over 2 and a half weeks, I had something that looked like it was right out of my dreams. I got a poncho out of my closet and bought a fisherman’s hat and some rainboots(which I sorely needed anyway) and decided that my little model and I should go out to the local park for a Halloween photoshoot. When we were leaving, people stopped and asked to get a better look at Nero. When they saw his face and realized there was a cat inside the fish costume they exclaimed “Aw it’s a catfish!” and asked me to let them take pictures.

Halloween is especially significant for my cat and I because it is an anniversary for my cat’s entrance into my life. Nero came to my home when he was neglected and cast out of his previous home during hurricane Sandy on Halloween 2012. Last year I bought him a bunch of pet store made costumes but since this year marks the 2nd year since he came to me, I wanted to make him something special and I am very excited that I was able to surpass my own expectations. I hope I have surpassed yours too!

Check out my costume in action, here! 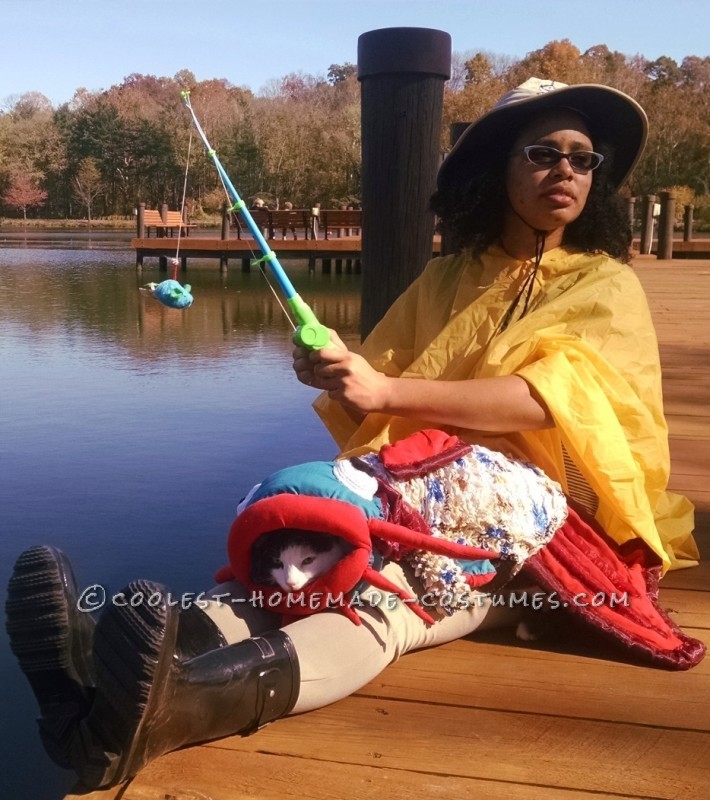 Fisherwoman and catfish at a lake 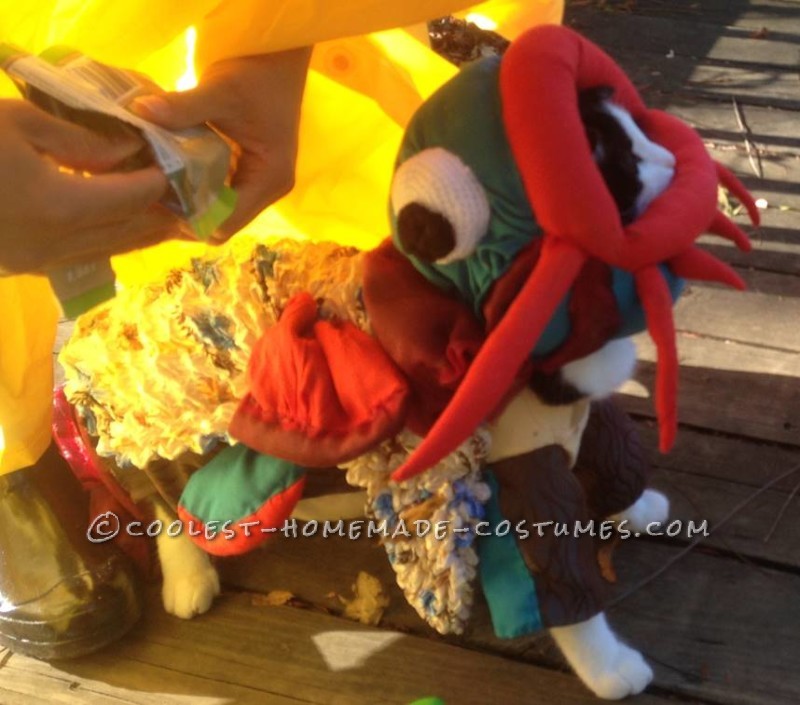 Taking a break to nibble on some catfish food 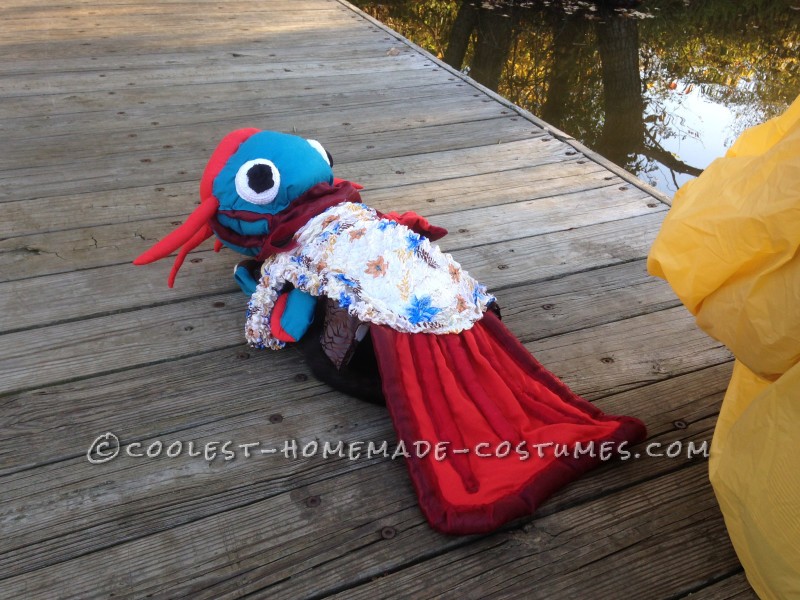 CATfish chilling on the dock 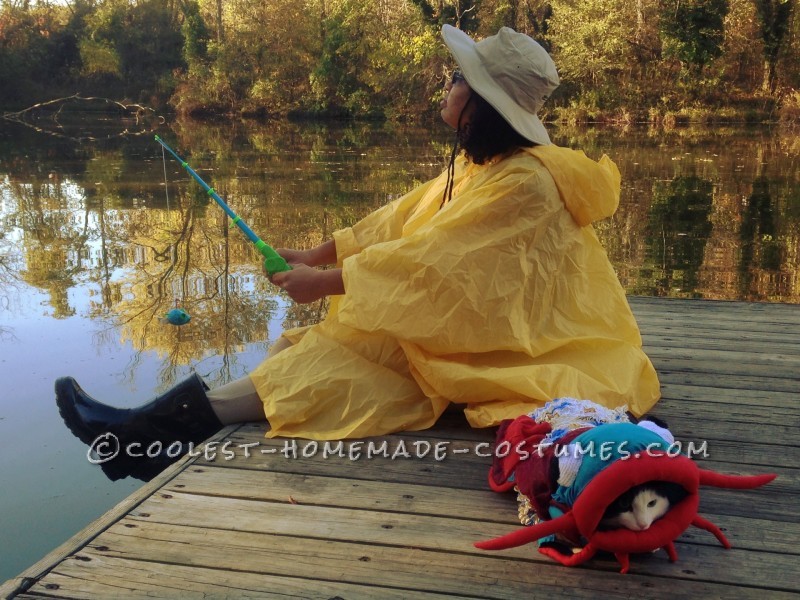 CATch of the day!

I had a cheap shirt that I bought at a drug store a while ago and had been sitting around in my scrap fabric pile. It didn’t fit me, but when it isn’t stretched to accommodate an adult torso, the fabric looks like scales.

The first problem that I ran into was that the pattern on the shirt looked more like the pattern on a Koi fish rather than a catfish, so I did some research on types of colorful fish and found out that Koi fishes had the best color distribution for a spotted back and a solid colored head with different colored lips, but catfish had the most charismatic lip/feeler faces. I settled on a catfish/koi hybrid where the lips were a bright color different from the brightly colored head, which also contrasted with the duller underbelly and stripes along the sides that served the dual purpose of imitating one type of catfish as well as making the seams look more natural.

I did some research on color theory to find out specifically which colors would bring out the best contrast for the lips and also match/not clash with the colors on the busy shirt. As a result I bought about $20 of fabric from Walmart to construct the rest of the costume around this shirt. 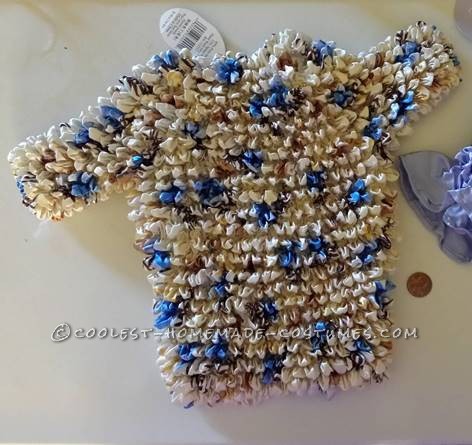 the shirt that started it all

Next I drafted a pattern that would stay snug on him so that he couldn’t wriggle out of it, while also allowing him to walk around. I sewed the body using my sewing machine in the basic shape of a tube, allowing overlap on the left side for velcro so I can easily get him into and out of the costume. Although the body peice was made out of the same fabric on the top and bottom, I sewed two 3 inch wide brown stripes along the sides so that I could see where to sew the shirt on to the top(as a decoration) and also so I could see where to iron on the velcro. There had to be extra cloth on the front ventral side so that the fabric could go up between his front legs and attach to sleeves, which were made of brown fabric in a simple tube shape with blue fabric sewn on top to hide the seam. There also had to be extra fabric on the back dorsal side of the body piece so that it could attach to a tail big enough to cover his own tail and his back legs. 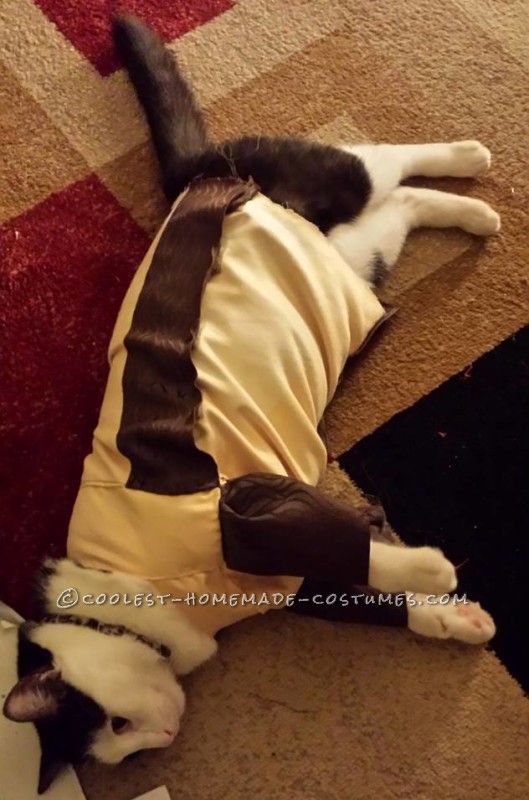 Nero being a helpful model 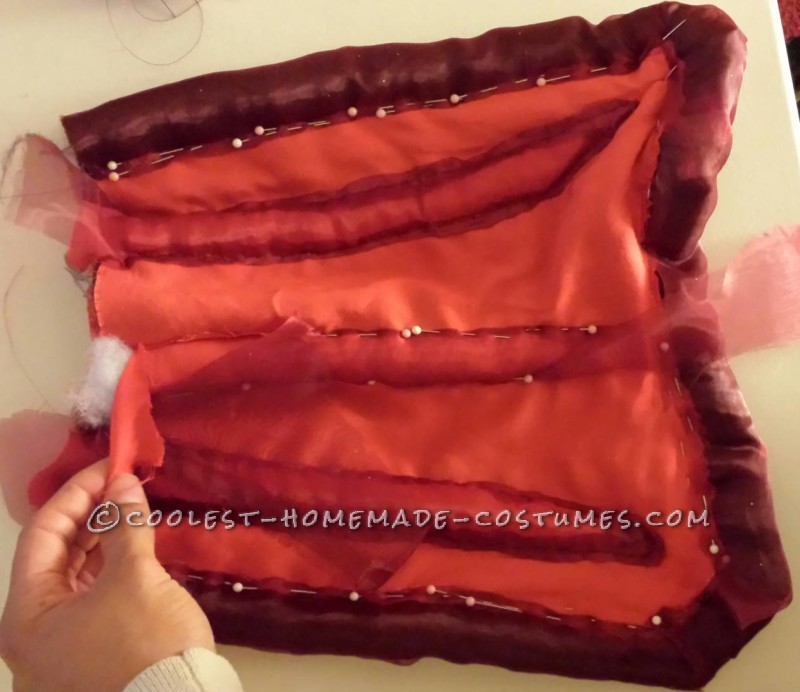 Tail had a lot of work in it

The lips and feelers were made from red fabric, folded and stuffed, with the fact that this particular fabric did not get completely rigid when stuffed accounted for and taken advantage of when the larger upper lip was bent into a crescent shape and sewed to the edges of the bottom lip. The feelers were then measured for accurately matched lengths, folded, sewn along one side, turned inside out and stuffed, then sewn to the underside and sides of the lips.

The three smaller fins were made of brown fabric with the trim areas stuffed and hand sewn onto them with the blue or red fabric sewn on afterward to cover the place where the trim and the brown fabric met. 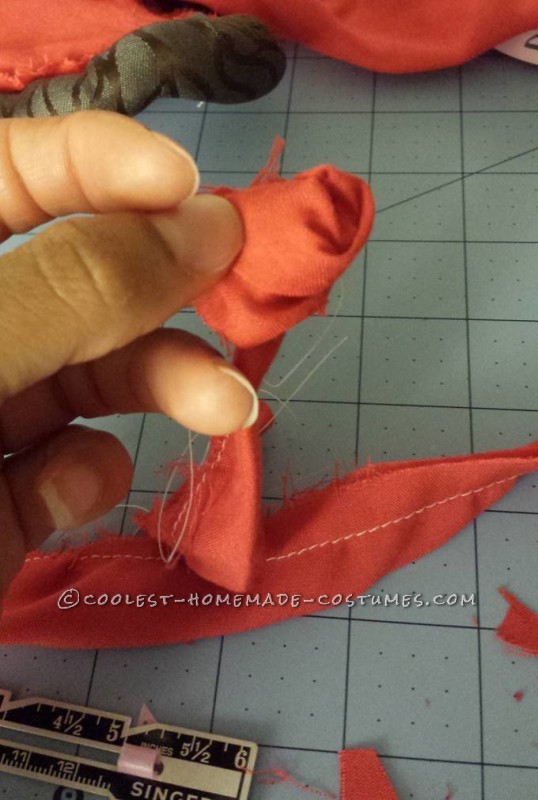 Last, but most difficult to do was the head piece, which not only had to be 3 dimensional but also had to allow enough space to accommodate my cat’s head without choking him and fit snugly enough to stay in place. I accomplished this by making a wedge forming an isosceles triangle with 3 inch sides and a 2 inch base out of fabric I sewed together then turned inside out and stuffed. I attached the point of this triangle to the seam of the lower lip, which, unlike the feelers, was on the outside. I then repeated this process for the upper lip and added 2 more, smaller wedges at the corners of the lips, so that the center of the head had a more 3 dimensional space for his head to go. I covered up the meeting place between the 4 wedges with folded and stuffed brown fabric covered with red fabric, meant to look like gills. 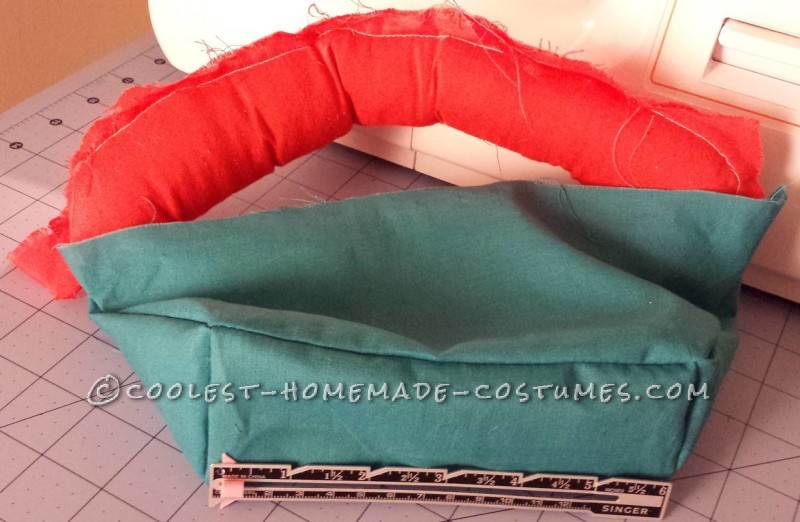 Bottom lip attached to its wedge

Minor Hitch at the End

After all this, the head was still not the properly rounded shape I wanted on the top, so I decided to extend the gill cover by adding red fabric as a sort of veil with velcro on the edge of it. There was more velcro on the base of the wedge connected to the lower lip so that the completed head piece was detachable and re-attachable, making it easy for him to wear the body piece separately from the head if he got fussy and didn’t want to wear the bulkiest part of the costume. I then crocheted the fish’s eyes with white yarn and sewed on round pieces of a black pillow case for the irises of the eyes. 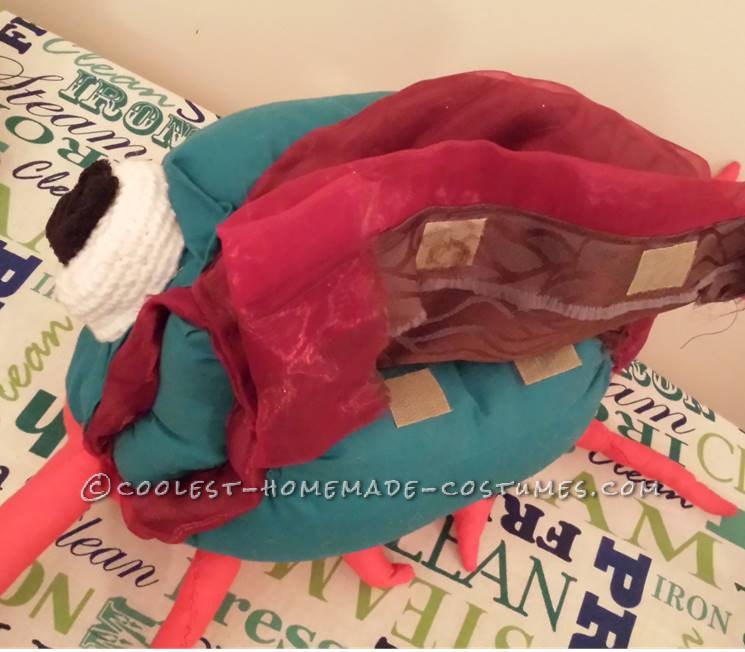