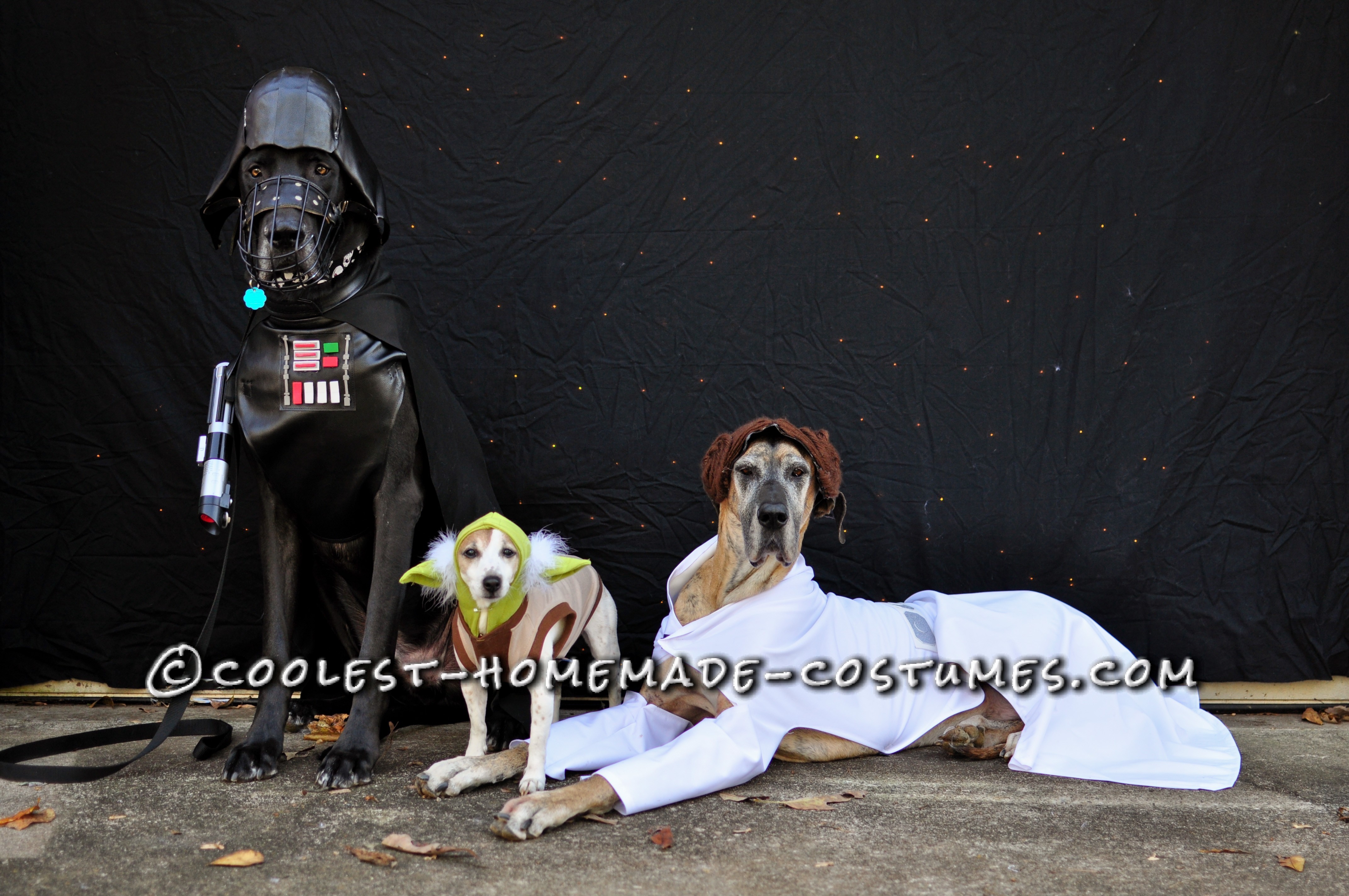 Meet our dogs…Nova is a 7.5 year old brindle Great Dane, Diego is a 4 year old black Great Dane and little Rose is an 11 year old Jack Russell Terrier. We often dress our pups up in silly costumes, most are custom made because…well, it’s hard to find a dog costume to fit a GIANT dog!! This year was a little different though. You see, not even six months ago we brought Diego into our family. He’d been bounced around to at least four documented homes and hospitalized for a painful bone disease all before he turned a year old. Never having anything consistent, he started reacting aggressively and, after biting someone for entering his yard on a dark night, he was surrendered to a Great Dane rescue.

He spent the next three years in a kennel with little to no socialization and where only a handful of people could get hands on him due to his trust issues with humans. Then we met him, got to know him, fell in love and brought him home He still had his trust issues with strangers though so he has to wear a muzzle when we go out. Not many costumes can be worked around a big, metal muzzle!! We thought Darth Vader would be the perfect choice for him and the rest just fell into place.

For Diego’s costume it started with the helmet. I wanted to creat an understructure so I looked around the kitchen for things I could use. I settled on a vinegar bottle and a plastic bowl. Unfortunately I only have one (rather embarrassing, lol) picture of the beginning stages of the helmet but you get the idea…vinegar bottle cut to the shape of his head and the bowl placed on top to give it a dome. The material used on top of the helmet was a stretchy pleather type material. And there was a LOT of hot glue involved,lol. After cutting the material to the shapes that I wanted and gluing them down I added two elastic straps to hold it on.

On to the rest of his costume which was pretty simple. The cape was made of a black, stretch material and has a pleather “collar” with elastic sewn onto it to hold it on. His chest plate was the same pleather material sewn with several straps that are also held on with velcro and the buttons are cut from foam and glued on. His light saber wasn’t handmade (Walmart) but still looked pretty cool.

Of course, a princess like Miss Nova just HAD to be Princess Leia! Her costume didn’t require quite as much work as Diego’s but also required quite a bit of hot glue and finger pricks! I took large sheets of paper and held it up to her while standing, drawing out my patter to the shape of her (big) body. For the sleeves, I left some elbow room so she wouldn’t be restricted if she wants to lay down (she’s a lazy one). Hemmed it up and added velcro to hold it all together, made a belt out of cut foam pieces and tacked it on and tadaa!! The princess has a dress! Her “buns” were made from pieces of the pleather material used above cut out as the base and brown yarn pulled through, hot glued and twisted to give it the desired shape. By the way, hot glue is HOT! Like Diego’s helmet I added a couple of elastic straps to hold it on and she was done!

Rose’s costume was obviously the most physically demanding…I had to walk ALL the way into Petco to purchase it! lol. Including it here just to keep with the theme (don’t expect it to be judged). Just didn’t have time to make Yoda this year…maybe next year I’ll give that one a shot.

So, there ya go! Our rescue boy was able to join in on the festivities and look pretty darn cool doing it! And the girls got to strut their stuff like they always do. I think they turned out pretty awesome and, judging the reactions we got (and big basket of doggie goodies we brought home from the costume contest), I’d say they were a hit! 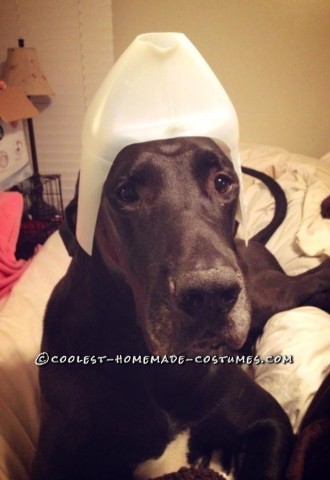 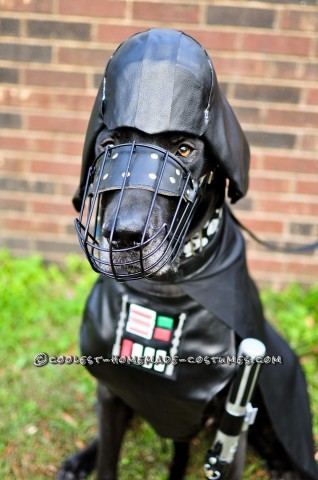 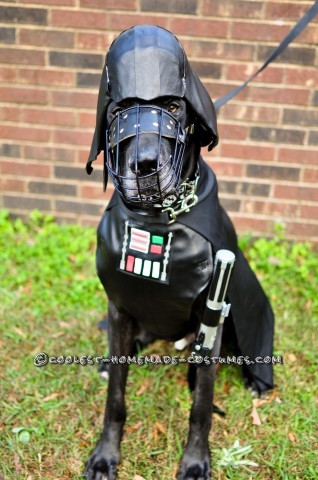 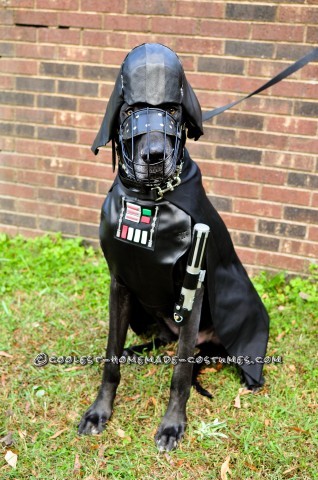 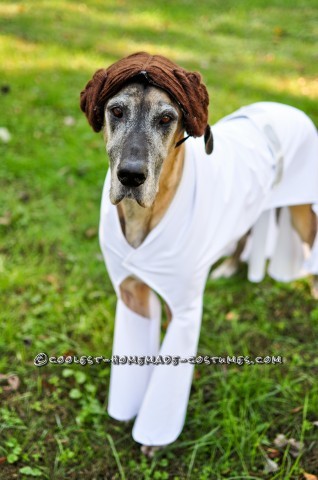 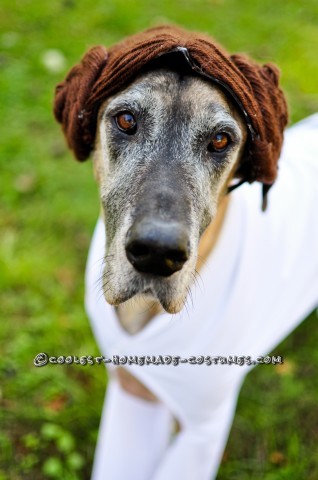 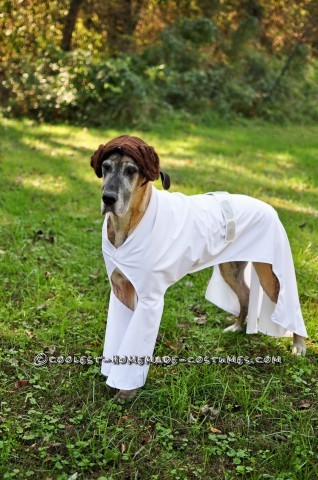 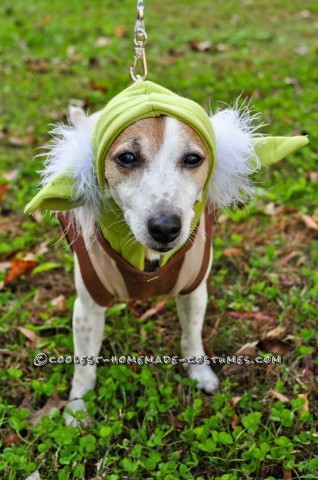 2 thoughts on “Star Wars Dog Costumes: The Canines Strike Back”