Here’s the story behind the Wii Remote cardboard box costume I made for my son.

When I was growing up I always imagined how cool it would be to make my children’s Halloween costumes. My Mom made some fantastic costumes for me (although the beautifully painted cardboard butterfly wings did not fare so well in the rain). My daughter has given me a number of opportunities to flex my creative muscle, but it wasn’t until last year that my son wanted anything other than an “off the rack” costume. Or perhaps it could be better explained that this Mommy was not up for re-creating a Star Wars character herself when it could be easily purchased.

Rewind to last September when I asked my son what he wanted to be for Halloween. He said a Wii Remote. Excuse me? Come again? A what? A Wii Remote. OK….

I thought he was kidding. I thought be might change his mind. Then I suddenly realized this was a Golden Opportunity to actually create a super cool costume for him.

I started with making the basic costume out of 2 shipping boxes. I left the flaps opened on the side so he would be able to stick his arms out. I also cut a hole in the front so he would be able to see. I also left the bottom flaps separate so that walking would be easier. I duck taped the heck out of those 2 boxes to keep them together. My daughter was gracious enough to help me model this part of the process.

We quickly realized that having a box rest on your head was not going to be a comfortable scenario for Halloween success. I was able to add shoulder straps inside so that the costume rested evenly on my son’s shoulders instead of on top of his head. Sadly, my photo of this great idea is missing and the costume has been passed on to someone else to enjoy.

After getting the structure of the costume finalized, it was time to start the design aspect. I covered the entire costume with white contact paper. Then it was time to make the buttons. Wanting to have a something that was raised off the costume, I cut out pieces of white craft foam. The symbols on the various buttons were cut from vinyl. When I could, I enlisted the help of my trusty Circuit to cut the shapes. I attached the vinyl designs to the white foam “buttons”. I then painted over the entire button with Triple Thick Gloss Glaze to give it a glossy, finished look. I then attached the buttons to the costume with super strong Glue Dots.

The need to have a cut out in the front so my son could see out did get in the way of my designing a bit, but I found a solution. I made the opening smaller (working hard to line it up so that where his eyes were while wearing the costume lined up with the design) and covered it with sheer fabric. Viola! An here is the finished product…

It ended up being a really cool costume. Everyone wanted to know who the Wii Remote was. He was a man of mystery. I think my son liked that he was wearing his own clothing underneath and could take the costume on and off as needed instead of struggling with wearing his costume all the time. As I dropped him off at school I told him, “Don’t let the other kids push your buttons!”. I think he rolled his eyes, but I don’t know because I could not see his face. 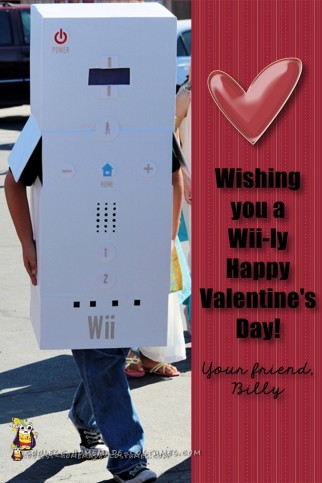