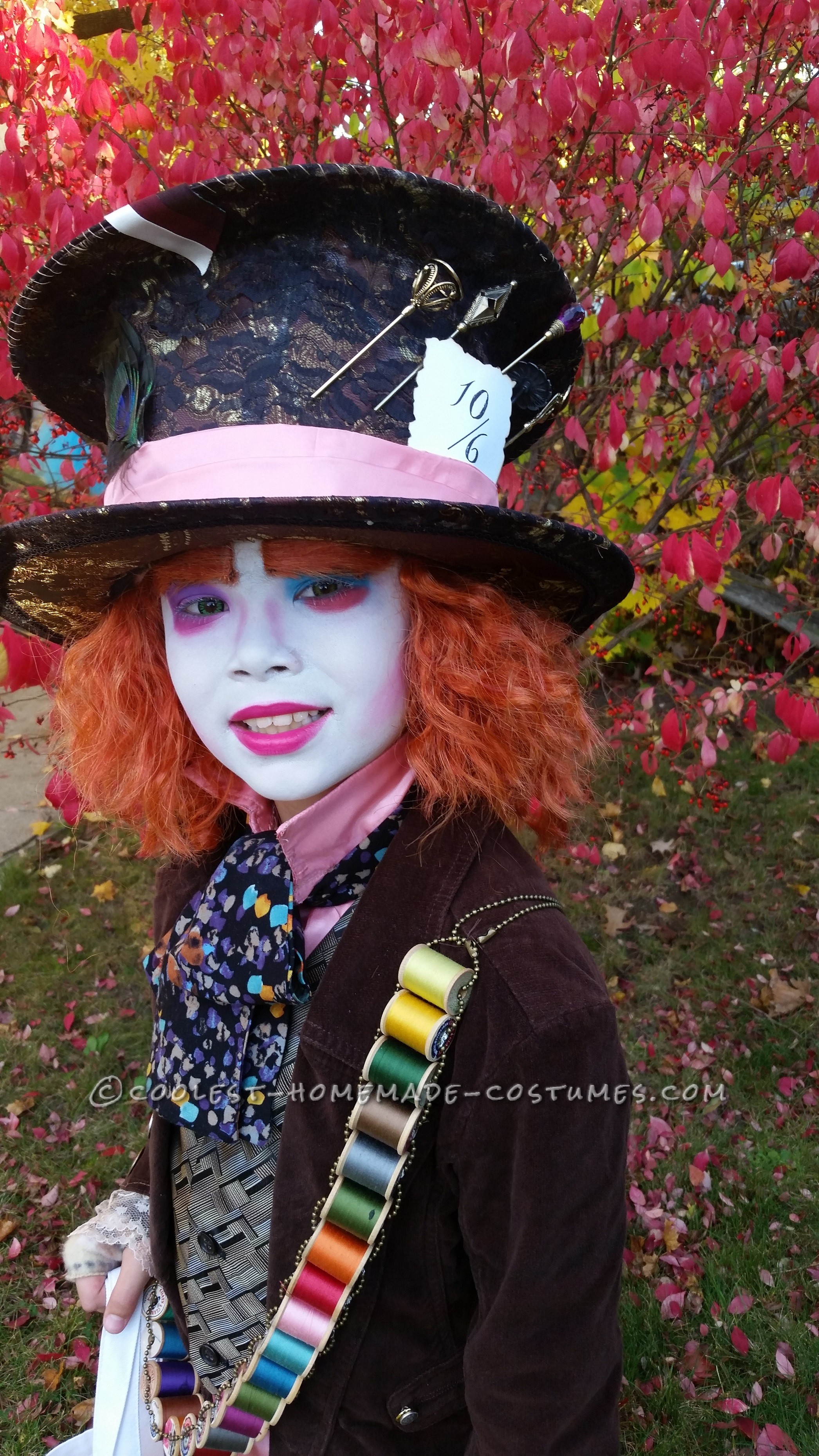 Hi! My name is Deanna Meehan and here is my story about my son Hayden’s 2014 Halloween costume, The Mad Hatter. My 8 year old son Hayden borrowed the movie Alice in Wonderland (Johnny Depp version) from a friend last month. Our family had never seen the movie. He loved the Mad Hatter character, everything from his unique look to his eccentric personality.  I always make his Halloween costumes from scratch every year and I love a new challenge.  To me, this costume was the ULTIMATE challenge. I mentioned the idea of him being the Mad Hatter for Halloween saying “if I can pull it off” and he was crazy excited!

This costume took almost a month to complete.  Lucky for me, I am a stay-at-home mom right now so I typically worked day in and day out on this costume with little to no breaks for food (like a sweat shop) in hopes to have it completed in time for his school Halloween dance. When I started the costume my first steps were ordering some pieces online such as vintage spools of thread for his bandoleer. I knew if I was going to make this as authentic as possible, I couldn’t use spools from Walmart. I also ordered the vest on eBay, shoes, red shoe laces and mismatch socks from Target and found the hat picks and peacock feather at my local party store. First thing made was the bandoleer. I went to my local hardware store and bought three yards of ceiling fan chains and strung the thread to match the movie. Next was a stop at my local fabric stores in search for the perfect matching fabric to make the colorful tie, the perfect pink fabric to make the button down shirt and the sash for the hat, the right plaid to make the fingerless gloves, and the perfect hot pink fabric to make the hanky hanging from his pocket. Next I scoured thrift stores all over Wisconsin for three days looking for the right color material jacket and pants. I was lucky enough to eventually locate them both at a children’s second hand store but shh, don’t tell my son, they were found in the girls department. While they were the similar look I was going for, neither were spot on and needed lots of alterations. First thing first, they needed to be sized down. My son is a size 8 and they were both size 14. I took the pants in in the waist and legs and hemmed up the length as the Mad Hatter wears caprices.  Next I took in the jacket, arms, sides and length, darted the back and gave it a lapel to give it a more authentic Victorian era look. I added mismatch buttons to the back, buttons on the lapel, and buttons and lace to the cuffs to enhance the authenticity. To finish the jacket off I added the hot pink hanky and the ribbon on the pockets just like in the movie. I found the perfect wig and eye brow set at a party store. My final challenge, the HAT! Its not a Mad Hatter without the perfect hat. I went to every Halloween store I could find including online. I even ordered several to be shipped to my home but after seeing the poor quality, I knew none of them would work. So with no other options, I decided to make one. I did lots of homework and found people make them out of cardboard so I tried it. Sure it had the shape, but it would have never been wearable especially for an 8 yr old. So I started researching hat makers and decided I must become one. What I found is in Wisconsin we don’t carry hat making supplies. So I ordered what I thought I may need online. This weird fabric called buckram and wire called millinery wire. Once I received my items my four day no eat, little sleep crafting project began. I used the buckram, cut out my brim circles and sewed on some wire to the outer brim for stability. I cut one inch slits on the inside of the brim where your head goes so I could attach it later. I then cut a larger circle of buckram for the top of the hat and sewed wire on to that for stability. Next was the base of the hat. I took a large rectangle piece of buckram and cut one inch by four inch slits on the top. I sewed the buckram in a cylinder shape and then very slowly and carefully sewed wire to the top part of the cylinder to each of the one inch tabs. This was so difficult, I have a $80 sewing machine and had no idea what I was doing. I had to make the top of the cylinder the same size as the circle I had already cut for the top so they matched. Now that the top of the cylinder was bigger than the bottom, I now had a bunch of gaps with no fabric so I glued on strips of buckram to cover the gaps. Then I was off to the fabric store for the perfect fabric to cover this hat. I found a pretty brown and gold silk that I thought would work but it needed something so I also bought some black lace figuring layering the two would get it as close to the real deal as possible. I covered the brim first, then the top of the hat and last the cylinder with both fabrics using fabric glue. This was no easy task especially with lace being see through. Now I had to attach the three pieces. Using fabric glue I attached the brim to the cylinder gluing the slits to the inside. I then hand stitched the top circle to the top of the cylinder. I glued in a comfort band on the inside and then almost died in shock that I was actually able to make this hat. I felt like I was dreaming. I added the pink sash, the peacock feather and the hat sticks. I hope you can visualize the hat making steps, but if not I remembered to take pictures along the way. Now the makeup, NYX milk crayon for the white and set with powder, NYX  pink, purple and blue eye shadow for the eyes, cheeks and nose, white mascara and hot pink lipstick. Finally, yes I got him bright green contacts but it finished the look.

Well he sure did steal the show. First stop was his school Halloween party. Everyone went nuts. All we heard was “OMG”, “Amazing”, “Awesome costume”, oohhh. I spent most of the night answering questions like, “did you make this?”, “how is this possible?” , “how much did it cost?” or “how long did it take you?” or hearing statements like “wow aren’t you an over achiever”, “looks like you found a new job”, “your completely crazy” and “I wish I was as talented as you”. It was wonderful but truthfully, I had no idea what I was doing and was just as shocked that it turned out as well as it did. I’m by no means a seamstress, rather just an ordinary mom trying to give my son the best childhood memories I can. What can I say, I love to see him smile. Needless to say, he won best costume and his picture is posted on his school Facebook page. Next stop was trick or treating. He was again the hit. He’d walk up to each house with a group of kids and he was usually the one being stopped to say “what an amazing costume!” and “who made this?” or “who did your makeup?” and “that’s the best costume Ive ever seen”.  He had lots of people taking pictures of him and with him. Every person to pass us was pointing and complementing. He said he felt like a celebrity. We ran into our local grocery store on the way home from trick or treating to grab stuff for dinner and five of the staff member asked us if he could take pictures with them. It was so crazy. The funniest moment was when we stopped by his fathers house. I had him go to the door himself, ring the bell and say trick or treat. His dad came the door, put candy in his bag and said “great costume” and almost walked away with out even recognizing him. Hayden said “Hi Daddy” and his dad practically got whip lash. He looked up and saw me and was more shocked than I’ve ever seen when he found out it was Hayden. He said ” Woah! I didn’t even recognize you, you look fantastic”.

When I started making this costume at the end of September, I had no idea it was going to actually turn out let alone get as much attention as it did. I posted pictures on face book like every mom would and was amazed by the amount of comments, likes and even people sharing my pictures with their friends. I actually had no plans on entering this costume into a contest, never even knew contests like this existed but I had so many people recommend this saying it was “award worthy” and “looks like an official movie prop” that I decided to look into it. I put so much time and work into this costume that I need a vacation from the month of October but it was all worth it to see that glowing smile on my sons face, he was just so happy. His millions of thank yous and hugs sure let me know he appreciated it. I learned a fun fact about why they call him the “Mad” Hatter. It’s because they used mercury in the hats many years ago and they all went crazy or “mad”. I didn’t use any mercury and somehow there were many days I felt like I did because I sure felt like I was going “Mad”. Thank you so much for your consideration in this costume contest. 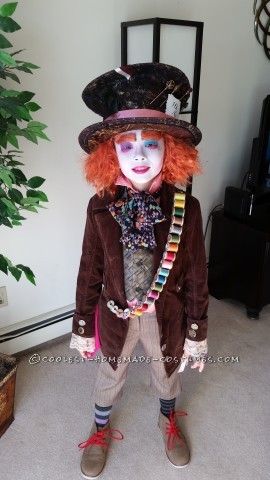