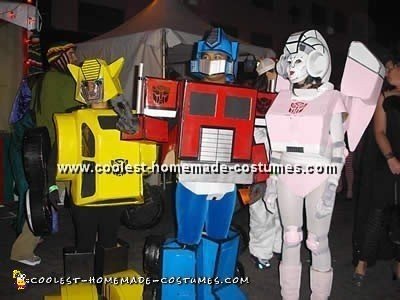 Here’s the story of our Transformers costume. This idea to be Transformers was my brother’s. We knew we wanted to make our Halloween costume and not use store bought ones. At first we all agreed to be PEZ (the candy). To be more specific, Star Wars PEZ. We planned on making the heads out of paper-mache and our bodies out of cardboard. But after about 3 days, things weren’t working out as planned. So, we tried to come up with something else.

Since I had already started paper-macheing our heads I thought we should be Bobble Heads! They didn’t go for it. A couple days later, my brother, who had been working on the boxes, came out with a few of them on and said he was going to be a robot. We told him that wasn’t going to win any costume contest. And then it hit him. “Fine. I’m going to be Optimus Prime!” (In case you never watched the Transformers, Optimus Prime was the leader of the Autobots, or good guys. He was the most famous Transformer.)

Well, his Halloween costume was the easiest since Prime is very boxy. The hardest part was his head. His girlfriend ended up being a character called Arcee. The most famous female Autobot. Of course I was left to be Bumblebee. The smallest Autobot, but one of the main characters.

About 95% of each Halloween costume was made of cardboard. Our heads were made of a combination of things. In my case, I used an old creme puff container as the base and built the shape of the head out of cardboard right on top. Then I used blue transparent paper to cover the eye holes.

For the rims of my wheels, which are attached to my arms, I spray painted plastic plates with chrome to give it a realistic look. The windows of my body were cut out and backed with black Carolina paper inside plastic protective sleeves. We used a combination of packing tape, double sided tape and blue painters tape to hold everything together. Then we spray painted each part accordingly.

For the Autobot logo shown on each of us, I cut a stencil from Carolina 12pt paper that each of us could trace with the designated color. For the most part, we worked on our own characters. When needed, we helped each other with ideas on how to go about making certain parts. Some easier than others. All we had to go off of were the pictures we found on the internet of the cartoon characters.

Tips to anyone attempting to create a Transformer costume next year:

1) Pick a character who looks more boxy not round (like me). They’re way easier!, 2) Allow yourself at least 2 weeks to avoid lots of sleepless nights., 3) Use thicker boxes for the body and feet and the thinner ones on the head and arm pieces., 4) Don’t make your feet so big! It’s hard enough moving with cardboard all over the rest of your body., 5) If you want to really transform…Good luck!

Total Spent on our Transformers costume: $25