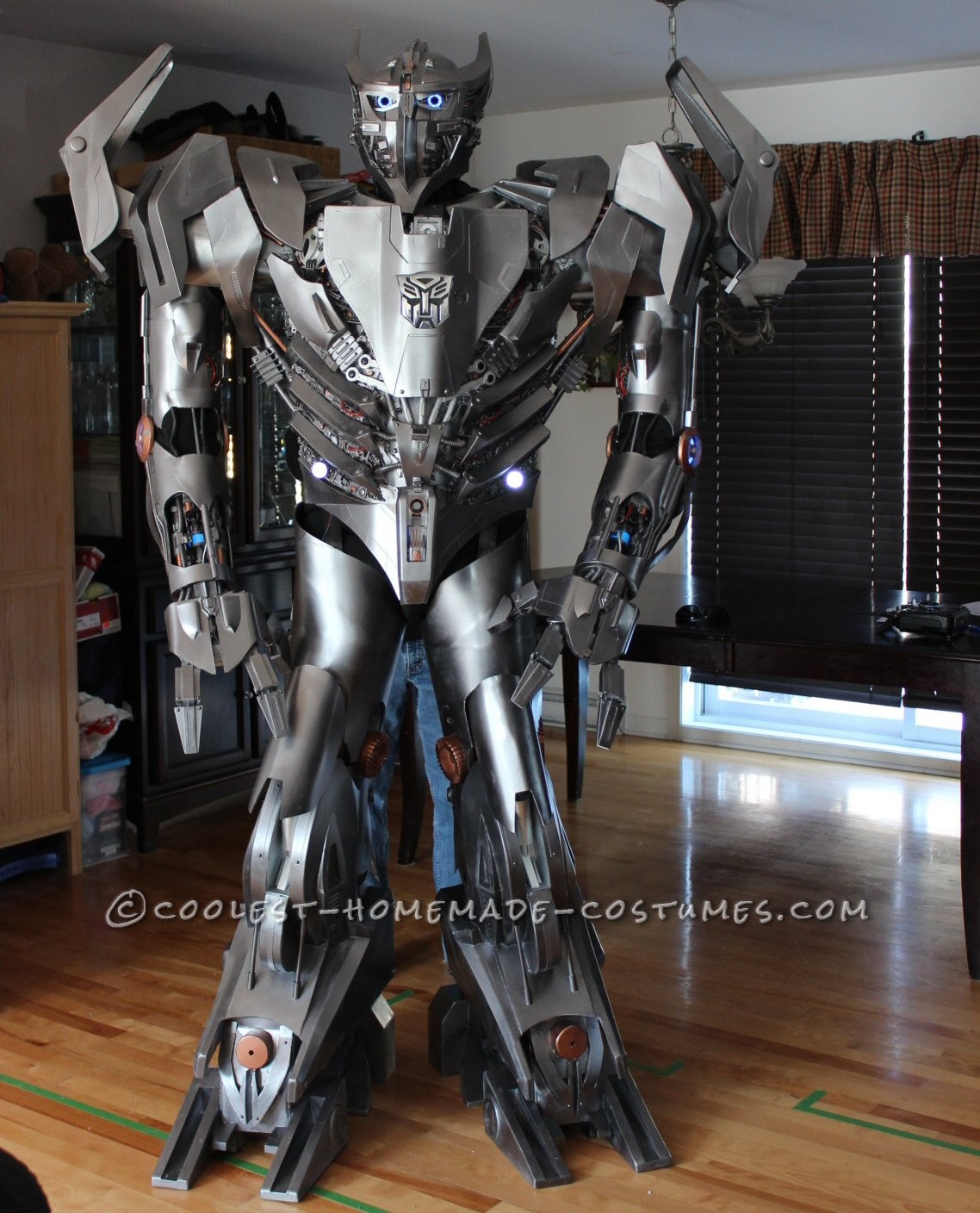 This Autobot costume took 2 years to build. It was with a lot of sleepless nights that I was able to build crazy full-fledged Transformers costume..

I wanted a complete realistic Transformers costume that could be mistaken for the real thing with crazy detailing and advance animatronics that would be on level with anything that exist to this day.

I began designing how Silverbolt would look and I made sure to follow the esthetics of the transformers movie look and used light-weight materials such as styrene plastics of various thickness (0.030 to 0.125 inch thick) and hold it all together with cyanoacrylate glue and also styrene rods, Styrofoam, wood rods and a bit of metal as well. The various shapes were made using a heat gun on the styrene and then bending it to the desired shape.

Also, one challenge was to make it as lightweight as possible because you’re basically in a scarecrow position inside the costume.

The detailing on the suit took a lot of time to build some came from zoids toys but some were flat-out scratch built. For the animatronics I used robotix toys motors for controlling the hands and arms mechanics. For the eyes systems, I used r/c servos, receivers and controllers to mimic the movements of the eyes in a 180 degree movements that we humans have. The mouth/mendibules work with a combination of servo and controller that send impulses to the servo to the beat of the sound of my voice. Also, there is an amplifier/speaker in his chest where the sound comes out.

The spinal fins go up and down with a flip of a switch on the r/c controller and is a nice touch. The thrusters shoot a compressed air stream that with contact with the air produces a smoke effect… but with well-placed white LEDs it give sthe impression of combustion at the same time. It is also controlled by the R/C controller as well and the effect is fantastic.

For the fingers, I used springs, wires and robotix toys motors to make them close and open with realism which was important to me. The rotating core in his arms are also motorized by robotix. The switches to control them are located in each arm where the operator can use them to operate the hands. There is also a gimmick in his chest where the autobot symbol opens up to reveal a powercore/spark that gives a fantastic effect – it opens up using the R/C controller and for the spark itself, I used a pocket lighting/light glass plate system that makes a great add-on effect.

Also, the head can open up upward so the person inside can get some fresh air.

The paint is a combination of light gun metal color paint/silver which makes him look realistic. This costume has a 360 degree experience, meaning that from any side/angle you look at it, you always have something interesting to see. Also, this costume is 7 feet tall and the feet themselves count for about 10 inchs of the height.

The fun part was when I figured out the solutions to the many problems this costume had. The hard part was sleep deprivation lol. Seriously, it was a fun project even if some features had to be left out because this beast was getting too crowded and I didn’t want to take 4 years to finish!

One other thing that was funny to see was my 2 year old son go out of my workshop screaming because it scarred the hell out of him the first time he saw it. But eventually he came to love it just as much as my other children that are proud to show this costume to their friends. I’ve been in numerous local news papers and I was also featured in this June’s popular science magazine, as well as various others.

This costume is an eye turner and kids love it because for the first time they can see a live walking, talking, interacting transformer!

I have new projects that will involve transformers that will push the boundaries even further.

I hope you guys enjoy seeing this costume as much as I had a blast building it. 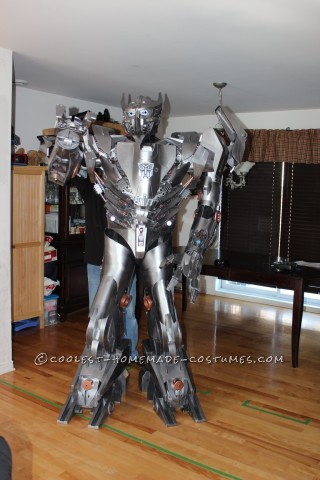 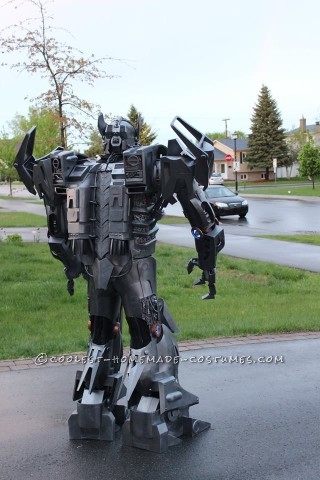 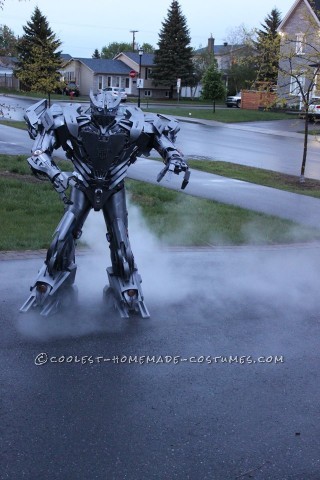 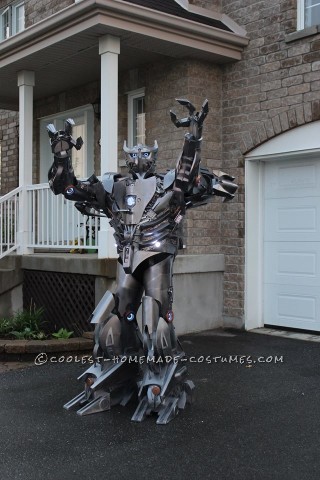 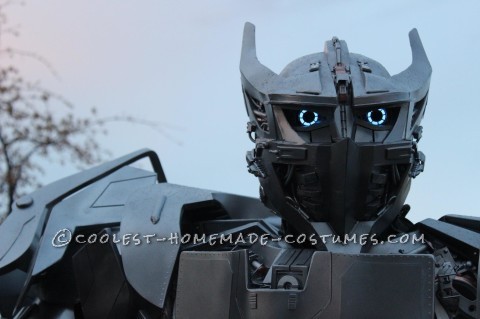 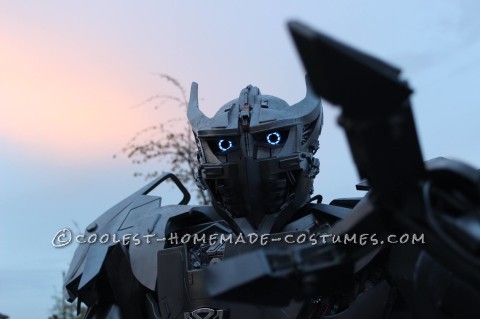 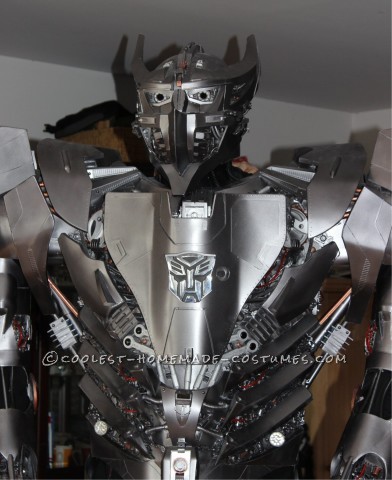 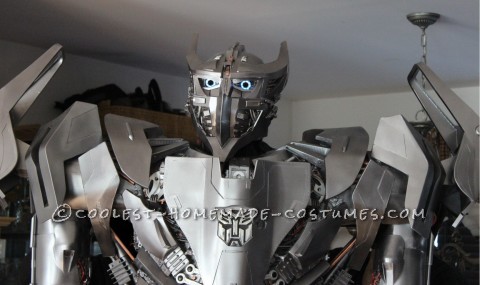