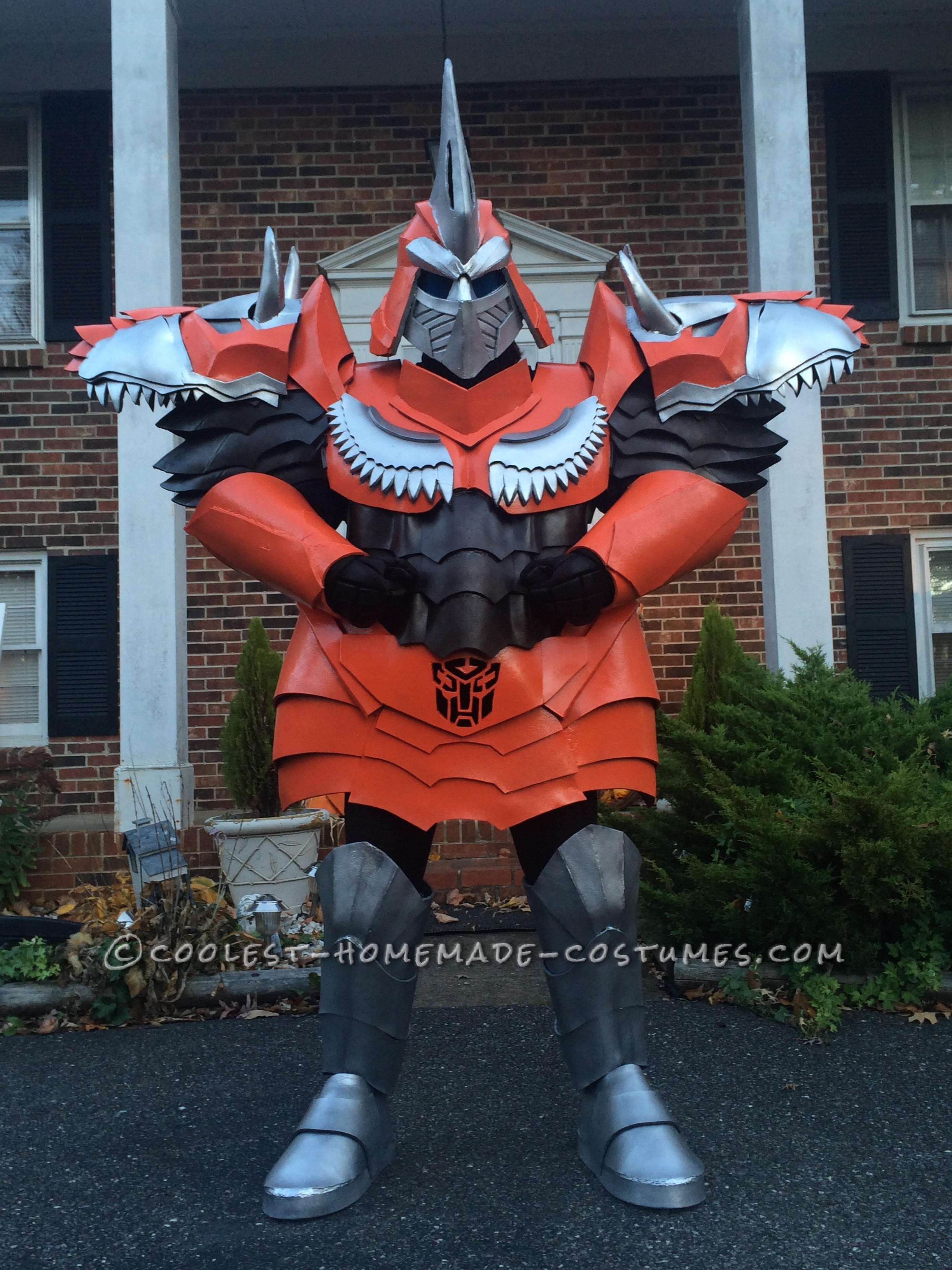 After working at Disney World for half a year, I was always inspired by the costumes around the parks and how they filled guests with feelings of excitement and awe! I wanted to recreate this feeling for others by building my own original costume. All I knew was I wanted it to be big, and I mean big. Big and exciting enough to literally make people say “ Woah!” when I walked in a room. Hence the idea for a costume from the new transformers movie was born. I decided to be the revamped 2014 Dinobot transformer, Grimlock a.k.a. the T-rex transformer!

I literally took on this project a month ahead of Halloween when I really should have started at least two or three months ago. I am an artist but had never tried anything this grand before, and wow, I was in way over my head. So my advice if you ever want to take on a costume this big is to start super early, in fact the earlier the better.

This entire costume is made of EVA foam, which is the advanced word for the foam mats that you can buy to line garage floors or exercise rooms. They usually come in packs of four or six and look like puzzle pieces you can put together, or come in rolls. I used several of both versions, because believe it or not, this thing takes at least five packs of foam. I cut each piece of armor in the general shape I wanted with an exacto knife. Then using a heat gun, I would heat the foam and mold it with my hands until I got the form I wanted.

After being heated the foam will stay in that shape. I also used a soldering iron and a dremel tool to make perfect bends and textures in the foam, for example, like the grill on the front of the mouth of the helmet.  All of this came together with a hot glue gun, but I learned the hard way that the mini glue guns definitely don’t cut it. Nothing would stick together and I was spending hours gluing one piece of armor!

Finally using a more expensive Pro series glue gun, all went well. The helmet is worn comfortably on my head with a paint ball mask attached on the inside. I also used lacrosse gloves to make my hands look bigger and more transformer-ish. My metal armor shoes actually have my old Nikes from working at Disney hot glued inside, so I guess you could say I added a touch of Disney magic from all my time spent in the parks in those shoes! To top that off, I actually added about three inches of foam to the bottom of my shoes to make me taller.

Painting was hard, as at first I had to use a spray paint called Plasti-Dip to coat the foam in a rubbery base in order to keep other colored spray paints from soaking into the foam. Then I had to do about six coats of each color, taping off sections already painted with blue painters tape along the way so as to get more than one color in certain sections. The final step is coating everything in a gloss sealant to make it as shiny and metal-ish as possible. So the costume is mainly all foam as I said earlier, but what makes it such a hard and time consuming piece is actually hand molding each and every piece of foam and figuring out how to make flat foam shapes three dimensional.

Everything turned out just as I had hoped for.  As soon as I walked into a bar, everyone would stop and stare and seriously go “woah!” or “oh wow that’s awesome!” Some people would run up just to compare their size to me! With the top part of my spike on my helmet and my height extenders I was about seven foot and the width of my body was almost three people!

I was so big I couldn’t walk through some areas, and kept hitting people in the face with my T-rex heads! They would be so excited and caught off guard that all they could do was back away and check out my costume. Almost everyone thought I had bought the costume from a design shop, and were in awe when I told them I actually made the entire thing. I was like a celebrity on the dance floor, people wanted pictures galore!

I added the LEDs recently to really make this costume look like a transformer. The eyes, logo, T-rex mouths and front armor all lit up and certainly made the costume not only look more amazing, but as if I were a real robot from another planet! I also just wanted to say that I completely exceeded my own expectations of my artistic self and what I am capable of! I couldn’t be happier, and I cannot wait to continue to grow as an artist and develop more skills such as these in the future! 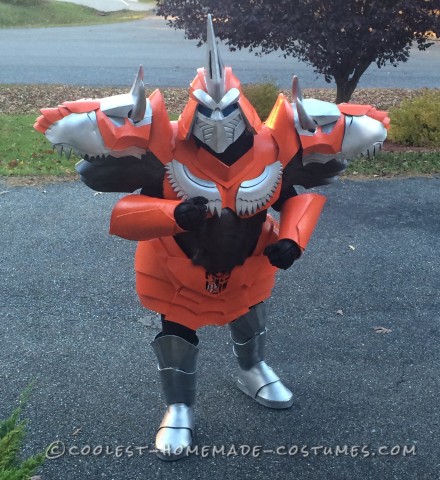 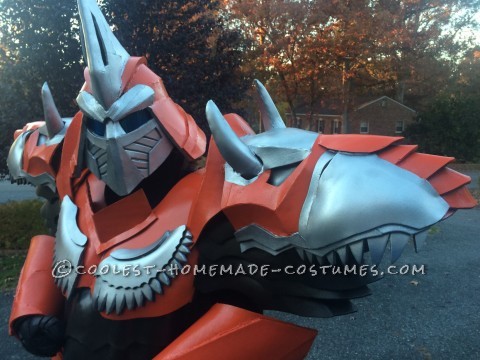 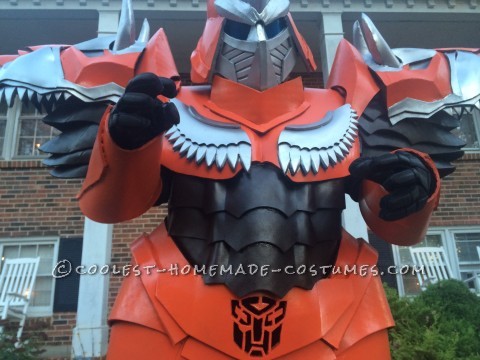 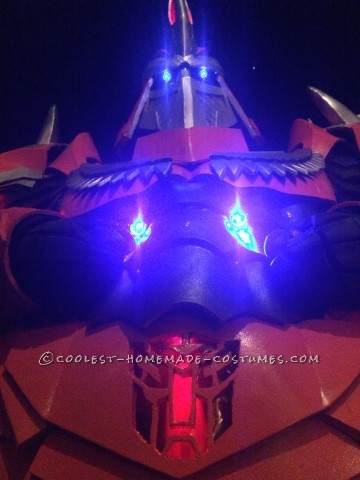 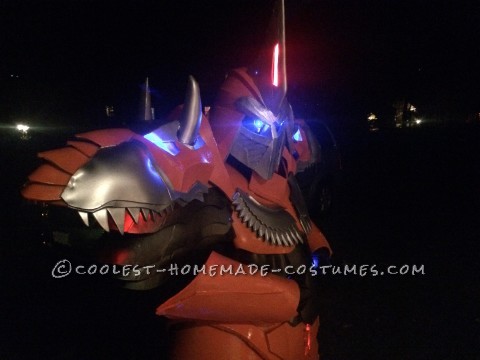 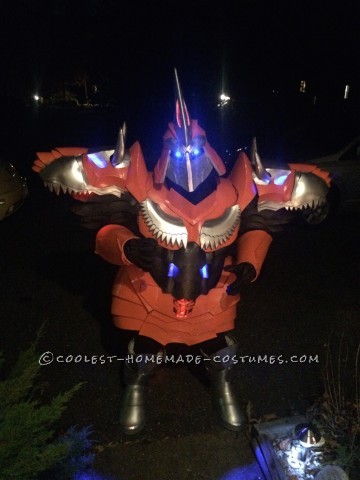 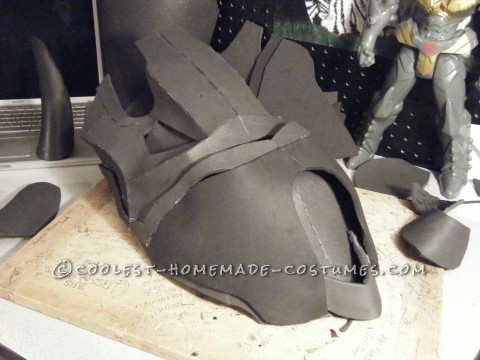 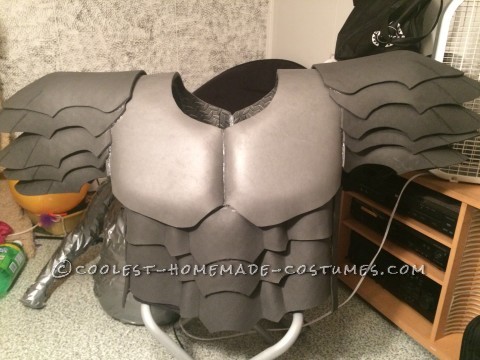 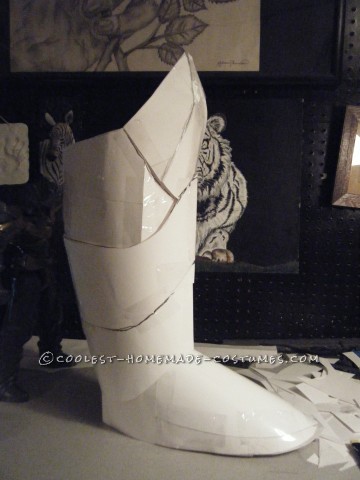