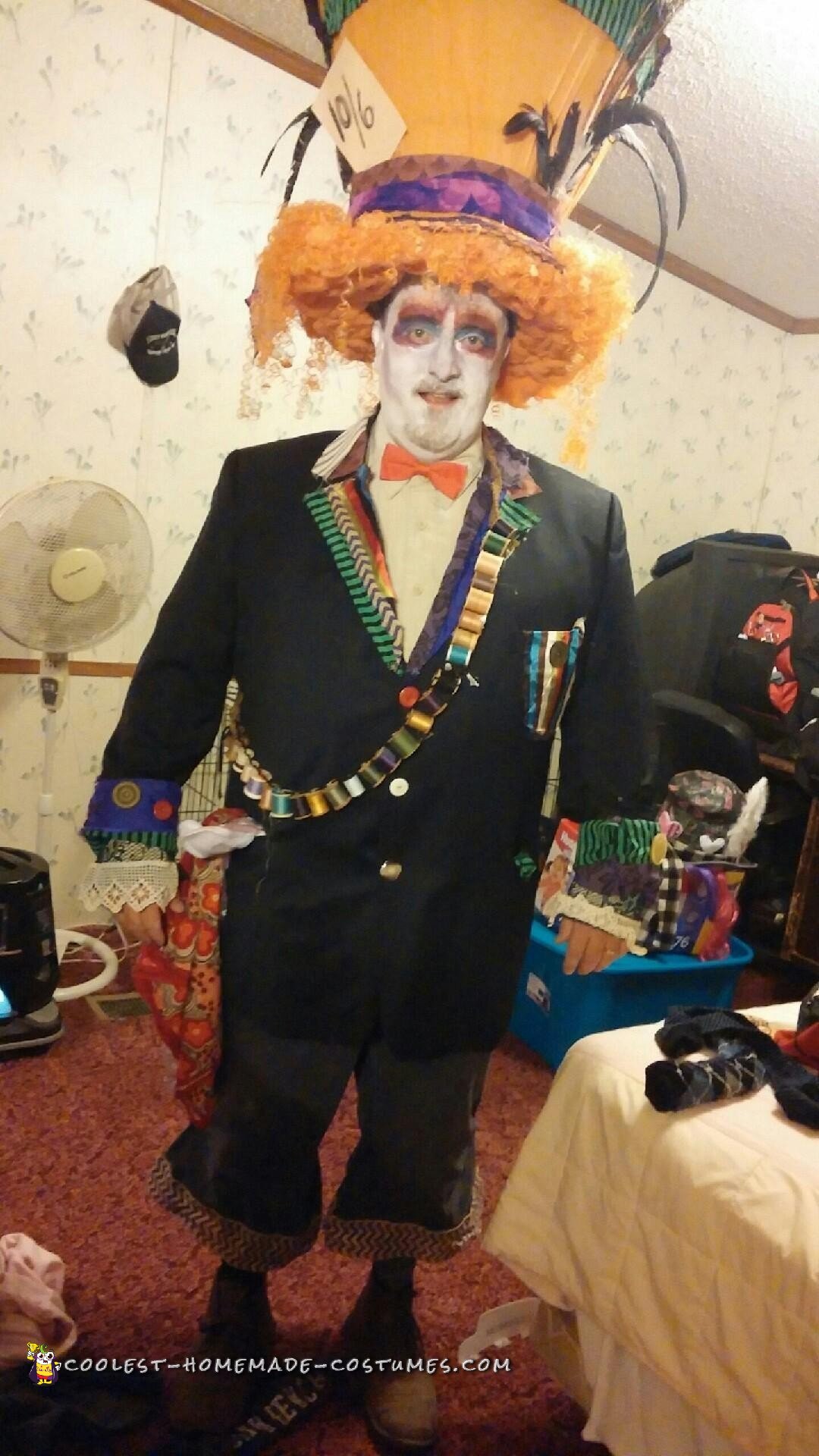 Here’s my husband in his Mad Hatter costume from Alice and wonderland. I originally started with the theme when I decided I wanted to be the Alice character, so I thought it would be neat to add the Mad Hatter which was homemade. Both of my daughters wanted to get in on it so one wore a rabbit costume that was pretty much homemade and one was the queen of hearts. Her dress was bought but I created a cape to go with the dress, and the Alice costume was bought.

The most work was on the Mad Hatter costume. It took me roughly two weeks to complete, but forming all the things that were home made took around two months. I also created a king of hearts cape and crown, but unfortunately it wasn’t worn because the person supposed to wear it became sick

To create the Mad Hatter costume, I bought a suit jacket and dress shirt from a thrift store, as well as long tube socks, scrap material and ribbon. The hat was made from card board and a round box you put together to hold envelopes at a wedding. Probably half of the cloth material was bought second hand and half I already had on hand

The Mad Hatter costume pants were some of my husband’s old dress slacks as well as the shoes. The buttons on the jacket were some I already had and the ammo that he wore on his chest was old spools of thread I borrowed from my Mom as well as the feathers on his hat that we collected from the chickens she raises.

Once I had the jacket, I removed the original buttons and replaced with different shapes and colors and added the cloth material to it in various places and added lace material from an old curtain to the shirt cuffs. The pants I cut off at the shin and added some stuff ribbon type material.

Once the enormous hat took shape (way my husband wanted that big and it made the costume a BIG hit!), I took a large piece of orange material and covered it and hot glued it underneath. I then placed the feathers, ribbon, hat pin and tag on it. To help hold the hat on his head, I used an embroider hoop and hot glued a toboggan inside it.

The hair was made from some blond curly doll hair I had on hand and pillow stuffing I dyed orange and hot glued to the hat. The make up was bought and I painted his face. I looked online to find instructions on the best way to do this.

Everything I had to buy roughly was between $7 And $9 with the jacket costing/the most – it was a whopping $4. Everything else was between a quarter to $2.

To me, I think the makeup was the hardest part but making this Mad Hatter costume pretty much from scratch was well worth it. The Mad Hatter costume drew tons of attention Halloween night and won two contests, almost three.  The first contest there were 15 to 20 people competing and there was a tie for first place between him and a female vampire, but he took the win. The second contest there were between 25 – 30 people with him being one of the last 2 people standing, but the winner went to someone else. And the third contest we made it to was a couples contest and we won that one together as Alice and Wonderland!

So all and all it turned out great and everywhere we went people wanted their picture taken with the Mad Hatter so I’m already thinking about what I want us to be next year! I had much fun creating this theme it was very relaxing and enjoyable! 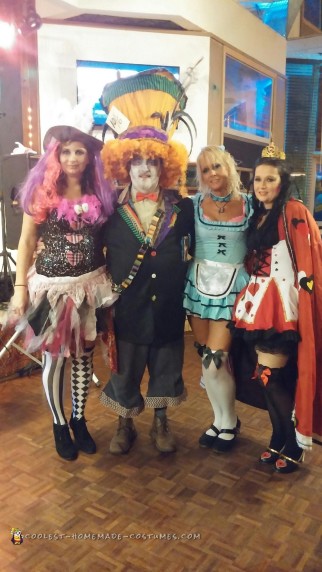