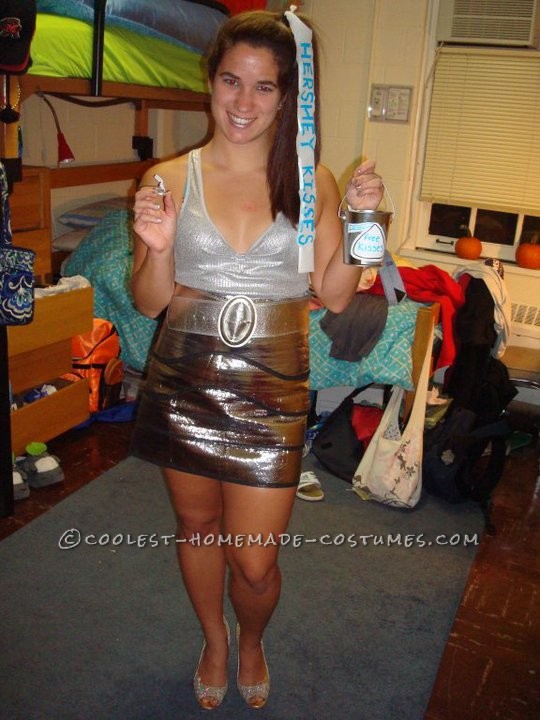 Ideally I wanted a tight silver dress, but couldn’t find one within my low budget.  I was at the dollar store one day and they had silver/foil car windshield sun blockers.  I knew that foil look was perfect for my Hershey Kiss costume, so I bought three of them since I was unsure exactly of what my design would be.  I spent months looking for the right top since I was trying to keep it under $5.  I checked thrift stores several times, but eventually found a silver tank top with a sequin appearance on the Kohl’s clearance rack.  The thrift store, however, did provide a wide silver belt that would piece together my skirt and top perfectly.

I struggled some in transforming the foil windshield covers into a skirt, but trimmed and glued until it somehow pieced together.  I wore spandex shorts underneath just in case I had a wardrobe malfunction in the middle of the party.  Before I left for the party I realized I was missing the white flag out of the top of Hershey Kisses.  Luckily my dorm decorated for Halloween, so I grabbed some white streamers hanging in a doorway and used a blue marker to create the flag and attached it to my pony tail.

My favorite part of the costume was the small silver pail I found in the dollar section at Target and filled with actual Hershey Kisses.  I drew a sign on the front that read, “Free Kisses.”  It was so much fun being able to go up to random people at the party and ask them if they want a free kiss and then hand them a Hershey Kiss instead of an actual kiss.  To complete my look, I painted my nails with a silver polish, wore silver lipstick (from the dollar store), and borrowed a pair of super sparkly silver heels from my neighbor.

I was so proud of my first home-made costume, especially after another girl dressed as a Hershey Kiss entered the party and she literally just wrapped aluminum foil around a dress.  I must say, my costume was pretty sweet!

From Zero to Cupcake Costume in 3 Hours!