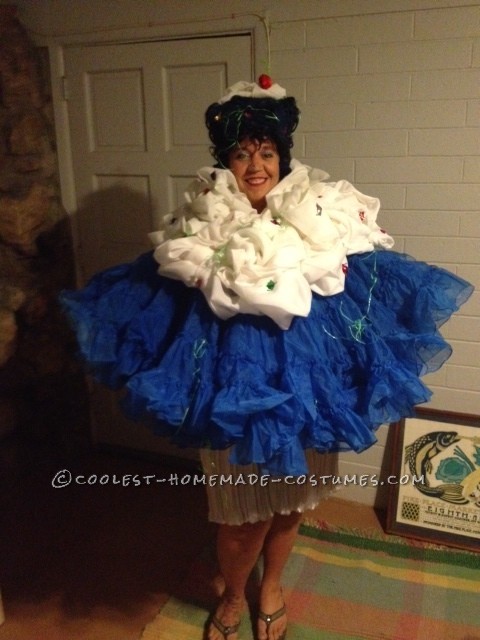 Let me start by saying I LOVE halloween. I tossed around many ideas for the month leading up to halloween. While I had two strong costume ideas, for whatever reason I just never got started on either one, and both would have required some serious planning. So here it was Thur, the 31st and I still have nothing. Before work I hit a couple thrift stores, looking for something to inspire me, push me in a direction. But I just never found anything that really spoke to me, so I left with nothing. I was busy all afternoon at work, and finally about 5pm and I was trying to get out of there my mom stopped by. She was dropping off a pumpkin for her friend and brought me a blue tutu , saying it was something she had in the garage, and thought maybe I could use it for a costume. SO while finishing up I tried to imagine what I could be with the giant blue tutu. I knew I didn’t want to wear it as a skirt, so I slipped it over my head just to see what it looked and felt like. I caught sight of myself in the reflection of a window and immeadiately thought…CUPCAKE!  I figured I could make a skirt out of aluminum foil and or tape, both of which I knew I had at home. I then remembered I had a blue wig, the same shade blue,  that I had worn for a Marge Simpson costume. Giant Blue cupcake it was. On my drive home I started to think about maybe making a cherry or something for the top. I knew I had one red sock and figured that would suffice. I decided to come home and get the skirt done first. I chose to cover a skirt of mine with the foil, and sat on the floor piecing it together, It was looking ok, but not awesome, and taking WAY longer than I wanted it to, which was frutrating. Needing a break I threw the tutu over my head and was just cheking it out in the mirror, and I grabbed a white sheet  sitting nearby and just started bunching it and pinning it with safety pins….It really made the outfit come together..looked so much like icing!  That took no time at all and when it was completed, I thought I’d better run out a grab a few things for details….I wanted fake eyelashes and something shiny to make spinkles. Once in the car, for some reason I just had a thought…oh, maybe I’ll stop by that goodwill near my house….I didn’t know why, but it was just my gut instinct telling me to go. I had no idea what I thought I might find, but just did a quick spin around the store…when I got to the skirts, from down the aisle, I couldn’t believe my eyes….a pleated, SILVER skirt, and it was only $5. So in and out in under 10 minutes and leaving with the PERFECT skirt….I couldn’t have found that skirt if I had searched for a year…I mean…it was crazy perfect. The costume gods were smiling on me.  Next stop, the dollar store, where I fould a graduation foil decoration and pipecleaners. Once I got home, I made the cherry with the red sock, stuffing it with cotton balls and used a green pipecleaner as the stem. crumpled up some white fabric to make a dollop of icing for the top of the wig, and pinned the cherry to it. Cut the foil decoration into small pieces and attached them with staright pins.  I did my makeup, pulled on the skirt and placed the tutu over my head. WIg on, and I was out the door, on the way to the party by 8;30. I couldn’t believe how good it looked. I got endless compliments and had a fabulous time! Another epic halloween. 2013 The year of the Cupcake.