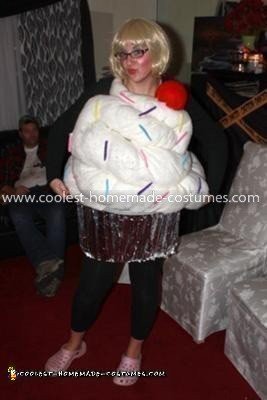 Last year, I went as a homemade voodoo doll, partly inspired by the ones on this website and submitted my costume. I knew I wanted to spread my ideas and creativity this year too, but wasn’t sure what I was going to dress up as.

Cupcakes are my thing. Anyone who knows me, knows how obsessed I am with anything that is cupcake related and I love making them too! When my friend suggested I dress up as one for Halloween this year, I thought, “that would so define me, but how could I do this?” I didn’t want to buy an already made costume so I searched through this website for other people who have made cupcake costumes and worked off of that.

I made mine a bit differently than most I’ve seen, but I think I really pulled it off. The Cupcake Costume itself was a bit bulky, hard to get around in and I could not sit, but it exceeded my expectations by far and the guests at my party could not get over it… I won best and most original costume again this year :)

I do want to add that my sisters name is attached to creator because she deserves more than half the credit to the outcome and design of my costume, especially the top half. My boyfriend was also a big help, mostly for the bottom half. This Cupcake Costume, in my opinion, was definitely not a one person job.

The top half of my costume was the trickiest part and I couldn’t have done it without my sisters help. The “icing” was made out of polyfil and batting. Bags of which we bought at Acmoore, but could be found at any arts and crafts store. I wore a long sleeve black shirt that I already had and while it was on, my sister cut and attached the batting, with “fabri-tac” glue, in swirl-like patterns while stuffing it with the polyfil.

I made the sprinkles out of pipe cleaners that I cut and bended to make 2 layers for a thicker look. My sister then glued the pipe cleaners to the batting in desired locations. The cherry was made out of a styrofoam ball (also purchased at Acmoore) that I covered with red felt (already had) and glued to it. Although time consuming (about 3 hours), it seemed to be the most effective and realistic way to go.

The only thing I would suggest you do differently is to use either a sheet or tablecloth as the “icing” because by the end of the party, the batting was tearing because it was so thin.

The bottom half was a bit easier to construct. I took a laundry basket that I already had lying around my house and cut the bottom of it out. It was the perfect shape of what a cupcakes bottom would look like. I just wasnt sure it was going to fit. Lucky for me, it was close to perfect.

I took heavy duty tin foil (bought at local supermarket) and wrapped it around the basket, but pulled out a few more inches than I needed. I layed it out flat on a table and pinched about an inch of the foil together leaving about an inch between each pinched section. Doing it this way gave an acordian affect which is what cupcake tins look like. We used hot glue to attach the tin foil to the basket.

The only thing left to do was figure out how to attach the bottom to the top, in case I needed to go to the bathroom or sit. We took 2 strings, hung them over my shoulders like straps, put the top half of my costume on, attached binder rings (bought at target) to the ends and clipped them onto the inside of the basket (bottom) to complete the ensemble.

Although the strings and rings held the basket/bottom up perfectly throughout the party, once I needed a potty break, it was impossible to clip them back on so I would suggest coming up with another idea to attach the halves.

I chose to wear the black long sleeve shirt and black leggings to make the light colors and cupcake silouette stand out more. I wore
pink crocs and a blonde wig to add a splash of color to the entire Cupcake Costume. My eye makeup was a rainbow in the colors of the sprinkles and I added pinkish red blush to make my cheeks rosey.

Total amount of time spent on costume: about 6 hours. 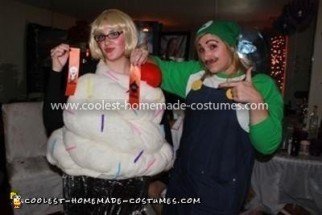 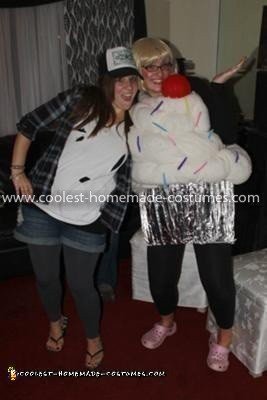 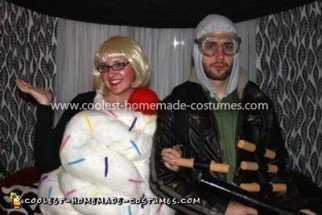