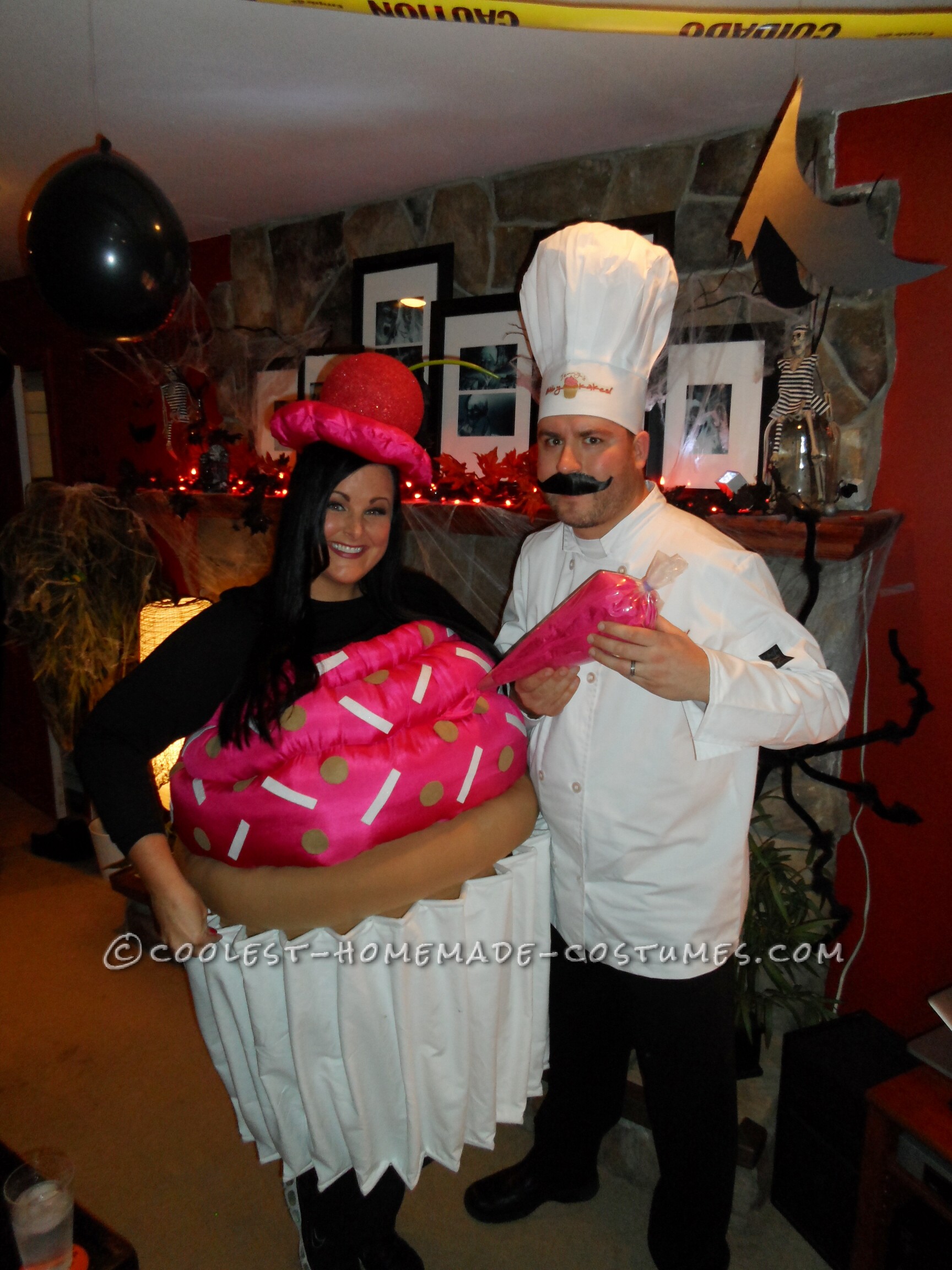 My wife is a very talented baker. So much so, that after many suggestions, she finally decided to start a cupcake side business out of our home. She is well known for her gourmet cupcakes. After losing out to a couple who were dressed as a loufa and soap at last year’s Halloween party, my wife came up with the idea of her being a cupcake, and me being her pastry chef. So I told my wife, “Honey, if you want to be a cupcake, I’ll make you a cupcake.”

So with a brainstorming session and reviewing a few pictures of other cupcake costumes online, I developed a rough draft of how I wanted to design her costume. I wanted her to be able to sit down in the costume (the pictures of other costumes looked like they used a hard material for the cupcake wrapper). With input from my wife for the icing part, we came up with the basic plan.

The rough idea was to make the wrapper out of fabric, use copper piping to make the wrapper spikes, and use fabric for the icing. This way, she could hike up the bottom ring to sit down. We found that using quilting hoops would give us a good base to start with. The wrapper was made using 2 different sizes of quilting hoops. I had to determine the number of “spikes” in the wrapper that I wanted (24). I determined the length of the spikes (3”), and calculated the circumference of the hoops, and marked them for contact points. I then proceeded to drill 2 holes per contact point.

On the larger hoop, I sewed brown fabric for the cake. I then created a pocket with the brown fabric, and filled it with polyester fiber fill. Next came the pink fabric for the icing, which was sewn directly to the brown cake. Again, pockets were made and stuffed. This was QUITE the daunting task, as the fiber fill made it extremely difficult to get it close to the sewing machine’s needle. After making 3 layers of icing piping on top of the cake, I had noticed that it wasn’t tapering like a cupcake top does. So I had to take some heavy duty thread to the inside of the icing areas, and hand-sew it several times and pull it tight to draw the fabric inward. Otherwise it just looked like a stack of pink tires. Along the top edge, we sewed elastic to help with the tapering…. But it didn’t, lol.

I then took copper pipe (the kind you’d use for a refrigerator water supply) and using a wooden block 3” long, bent the pipe in a zig-zag pattern. Fabric was sewn for the wrapper, with a small channel on the top and bottom for the copper piping to go into (like a curtain rod). After feeding the copper piping into the fabric, I burned holes in the fabric with a soldering iron in order to place grommets. After crimping the grommets to the fabric, I used white zip-ties to anchor the wrapper to the quilting hoops. The top hoop had the brown fabric for the cake sewn over it before attaching the wrapper. Once the wrapper was attached, we were able to use suspenders on the inside to hold the costume in place on her body. She pinned her sprinkle cutouts onto the icing, and I glued them into place with fabric glue.

Her hat consisted of a little pink pillow made of the same icing fabric, with a Styrofoam ball that she had shaped to fit her head, and she painted with red glitter. The cherry stem came from a fake plastic flower. We attached the cherry to the icing and subsequently to a plastic hair band, using florist wire.  And viola!! She’s a cupcake!

My costume was much easier. I bought a chef’s jacket from a local food supply store, and the hat was purchased last year from a Halloween store. I used iron-on transfer paper and put her cupcake business logo on the jacket and hat. I also made an icing piping bag for my costume using a large piping bag of hers, with a tip as well. I sewed a little bit of the pink fabric with poly-fill in it, and put it into the bag.

I’d estimate somewhere between 20-30 hours of work went into this project. Everyone at the party loved it. The host shouted “OH MY GOD, YOU’RE A CUPCAKE!!” when she saw my wife. She received EVERY vote for “Most Original” costume, so I’d say the work paid off.  The best part was how happy my wife was when she first put it on. She was like a kid who just opened her first Christmas present. 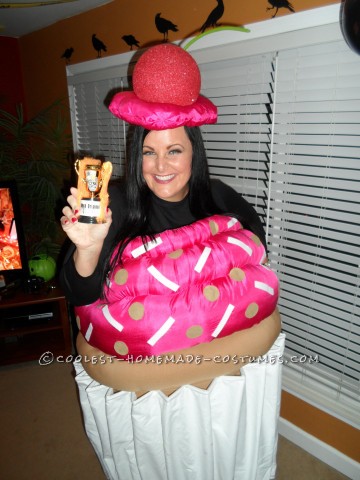 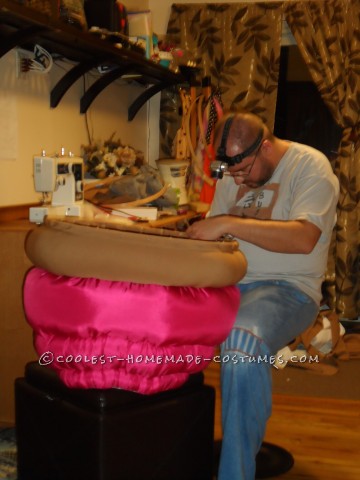 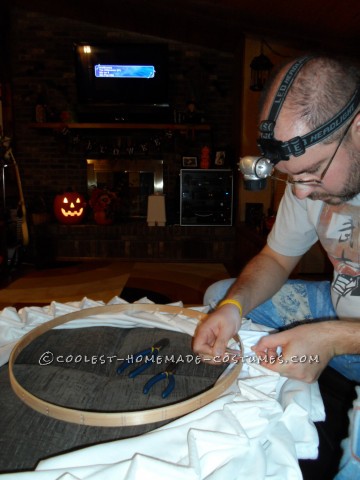