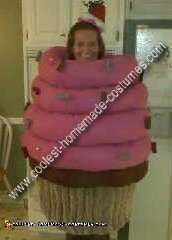 I am a cake decorator in my spare time and wanted something cutesy and cake related for my costume. It hit me on a sleepless night to be a Cupcake Costume so I used things I had laying around to get started at 2am. Execution was easier than the engineering unfortunately but it all came together after a few failed attempts! If I hadn’t tried various methods, I’d probably have had less than $50 in the whole costume. I wish I had looked at this site online first!

I used a spare flat bed sheet in brown to make the “chocolate” part of the bottom of the costume because that’s what I had on hand in the middle of the night. I sewed a tube opening for some type of reinforcement to give the cup a round shape on top and bottom and then sewed individual “tunnels” to make ridges like cupcake wrappers have. I stuffed them with pillow stuffing but wanted a tin-foil type sheen to the bottom so I used some sheer silver lame’ material and sewed it over the brown. I would’ve preferred something less sheer but I used what I already had.

I started out with some foam pipe insulation from Lowes that held shape pretty good to give the shape of the cupcake bottom, but it became such a weighty costume that the foam didn’t hold up. I also tried hoola hoops cut but they were kind of soft and bent under the weight so eventually I ended up making my own PVC frame to support the suit. I used some PVC pipes in small diameters leftover from my home remodel and a heat gun to bend the plastic pipe and PVC connectors and PVC glue to join the ends into circles. Thank goodness we had gadgets and tools from the remodel laying around for this kind of thing or it could’ve gotten expensive. I made a small pipe circle for the bottom of the cupcake wrapper the same width as where it would hit on my legs, plus a little room for movement. I made a bigger one for the top and used T joint connectors to put pieces randomly spaced to connect the two rings and reinforce the shape from collapsing. Doing this ended up making the form the shape of a cup. I went a little overboard with sturdiness at this point because I had already made multiple attempts to give this thing shape and nothing had worked right. As I was making the frame and before gluing, I took the brown bottom I had sewn earlier and threaded the PVC circles into it at this point and glued the joints and hand stitched where needed to hide the white pipe. I sewed brown suspenders and attached them to the frame to hold the outfit up on my shoulders- I found it essential to sew in some padding because this was a heavy costume.

I bought pink fleece material from JoAnn Fabric and originally sewed it into a long tube stuffed and arranged like icing but it was too heavy to hold the right shape when I put the costume together. I ended up making four individual rings of pink and one in brown of tubing shaped like donuts in ascending diameters. I made one brown ring stuffed because I wanted where the cupcake met the wrapper to have what looked like chocolate cake sticking out.

I used a bar stool base as a mannequin and stacked the cupcake then the icing and tacked the pieces together as I went. I tacked the large circles together in the shape of the icing top and tacked it to the suspenders holding the bottom up. I left holes for my arms to poke through.

For the sprinkles I purchased foam hair rollers from the Dollar Tree and spray painted them in different colors and I also used some really big pearls I found at Walmart. I hand stitched them on but hot glue might have worked better since some kids at the party had pulled some off by the time I got a photo made. The texture of the foam didn’t handle being stitched well.

I used a small amount of white fleece and some leftover pink fleece to make a strawberry hat. I made it like a pile of pink icing then some white whip cream on top. I sewed white iridescent sequins to the white fleece. I made a strawberry out of felt and beads using a tutorial I found online. I sewed some green felt to cover wires and made the stem and leaves and used green pipe cleaners twisted. I then tacked it all on a wide headband that I had.

I wore a long sleeved brown shirt, dark jeans and brown heels with sparkling makeup to match the bottom of the cupcake wrapper to finish off the costume. I put the costume on once I got to the party since it was a little too stiff for the ride over in the car.
My fiancé wore a chef’s jacket and hat and went as my “baker”.

It took me about two weeks of working on it in my spare time but the reaction I got was well worth the effort! The costume was definitely a hit! 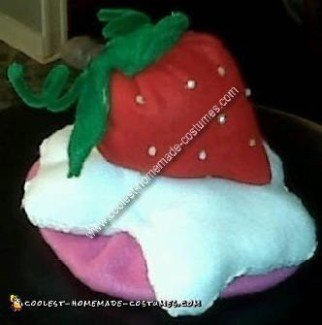