What do you get when you have a Mom Chocolate Bar and a Peanut Butter Father? A bunch of candy bar kids and one sweet Halloween costume!

Each year we create a family Halloween costume that is a secret to everyone but the members of our family. Our friends and extended family have to wait until Halloween for the big “reveal.”

With such a king-size group, we have to be creative to cook up a concept that will involve everyone in a fun, unique way and will make each family costume better than the last–bar-none.

This year we thought we would all dress up as candy and leave it at that. Then, we thought the costume would be even more fun if it had a few different sweet layers of meaning. My husband said the costume had a little “wink, wink—nudge, nudge factor.” I said it was “our little lesson in genetics.”

Our costumes seemed to cause an absolute sugar rush of enthusiasm around town. Several people commented that this was their favorite of all of our fifteen years of family costumes.

I decided to be the iconic Hershey Bar as the “Chocolate Mom” and then looked around at different jars of peanut butter to see which one would make the best “Peanut Father.” When I saw that Jif already had “#1 Choice of Choosy Moms” on our logo, we had a winner! It was a match made in candy heaven.

Each of the kids helped us choose which chocolate and peanut butter candy bar they would get to be, and we played around with ways to personalize their costumes. (You’ll notice things like “Peter Butter Cup” instead of Peanut Butter Cup, etc.)

We bought packages of each candy bar so my kids could give people “themselves,” as they called it. I bought to-go packs of Jif for my husband to hand out. When we gave them the mini Hershey bar and the peanut butter, I’d say, “Don’t let those two get too close to each other!”

I made all of the costumes except the Hershey’s Kiss out of either flannel or felt, depending on which one had the color closest to the candy bar wrapper. For the candy bar costumes, I just measured the fabric against the body of the person who would be wearing it and cut two pieces to match the rectangular or square shape of the candy bar. It was so fun to sew each one and watch our army of candy confections growing before my eyes!

I wanted each candy bar to look as close to the original as possible, so I used both my computer and my sewing machine to make each letter sharp and defined. I used cotton fabric for the logos and cut the fabric into 12×12 squares. I ironed Heat n’ Bond to the back of each square before cutting out the letters. I found each logo online and scanned it in to my Silhouette Cameo with my Mac. I traced around each letter with the Silhouette software and then used the machine to cut each letter out of cotton fabric. I then ironed on the letters to the front of each costume and appliquéd each one with my sewing machine. It was time-consuming, but worth it to the pesky perfectionist in me.

For the larger designs on each candy bar (like the red and white shape under the Snickers logo), I eye-balled the shape and then used adhesive spray to stick it to the front of the costume and then sewed around the shape.

For the smaller letters on each costume, I used the Ultra Heat N’ Bond because there wasn’t enough space on the letters to appliqué around each one.

For the Hershey’s Kiss, I used thick, shiny silver fabric and cut it into six strips that were narrow at the top (about 3 inches) and wider at the bottom (about 6 inches). I sewed each strip together, leaving part of the seam open on each side for armholes. Before sewing the pieces all together to make a sort of “tube,” I hemmed the top and the bottom, leaving enough space to put elastic through (I used ¼ inch elastic for the neck and 3/.4 inch elastic for the bottom). I sewed the tube together, leaving a six inch opening at the top. Then a sewed velcro on each side of the opening so we could easily get our little chocolate kiss in and out of his costume comfortably. For the hat, I measured around his head with the fabric and then cut out two triangles with rounded bottoms out of the fabric piece. I sewed wire into each side of the “paper” coming out of the hat to give it more shape. I used heat transfer vinyl to put his name on the hat.

For the Peanut Father Jar, I had to brainstorm to figure out what would give the jar shape, but wouldn’t make it too hard for my husband to move around and to get in and out of the car and assist with all of the kids–even a Chocolate Mom has to have help for Trick or Treating! I ended up using plastic boning, which I had in my sewing room from making nursing covers. It was perfect! I measured around his shoulders to figure out the size of the jar and did all of the appliqué on the jar before sewing a strip of blue at the top. I sewed a strip of fabric on the inside of the rectangle to act as a sort of “casing” for the boning, then I used a safety pin to thread the boning through the casing. Then I cut a circle out of blue fabric that was matched to the size of the rectangle to be the “lid” (I just made the width of the rectangle the circumference of the circle). I cut a hole for his head that was big enough for him to be comfortable. I sewed the rectangle to the circle with right sides facing each other so that it would have a finished look to the lid. I left the back of the jar open so that my husband could move around easily and help carry the baby, etc. 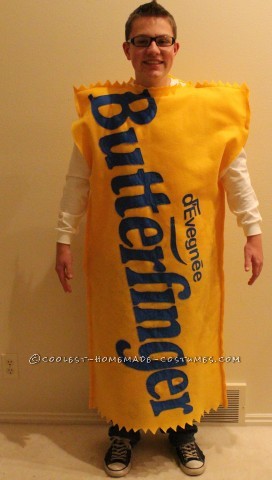 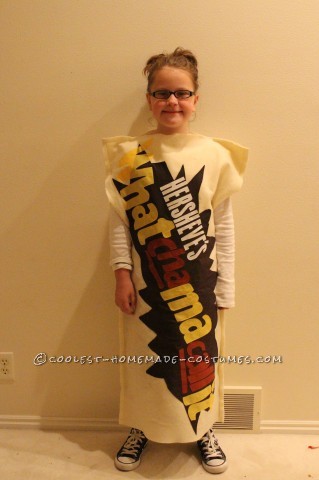 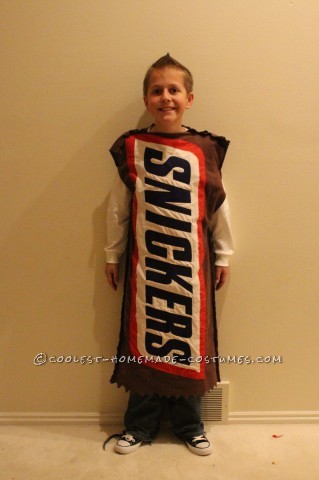 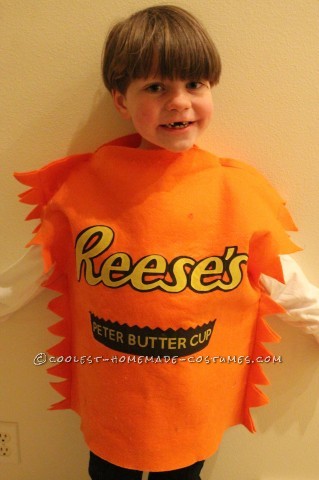 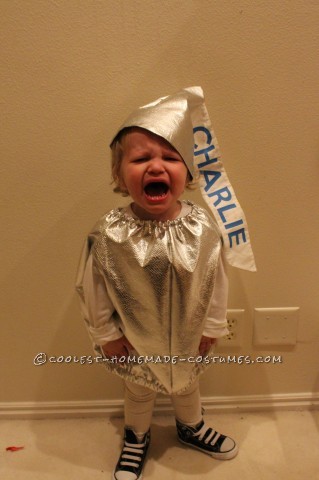 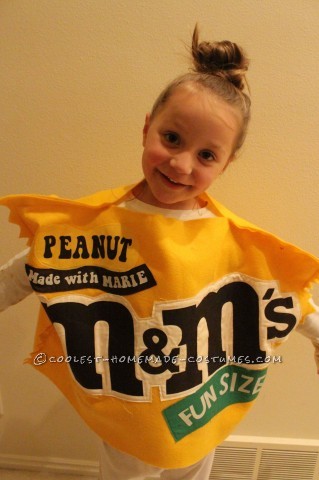 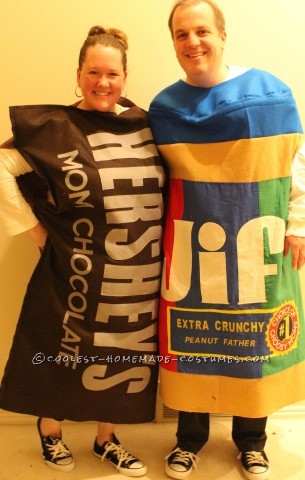 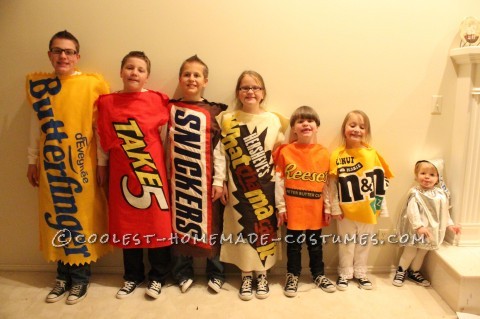