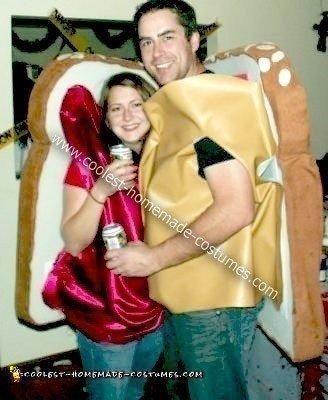 Creating this Homemade Peanut Butter and Jam Halloween Couple Costume was a bit of a challenge. First finding the foam (which was a camping mattress) and then cutting it to shape using knives. To wear the bread we had to slice into the foam and tunnel in straps so it wouldn’t be seen form the back or front.

Once the bread was sliced and shaped with the straps, we cut the material for the crust and spray glued the pieces on. and then added the sesame seeds.

To wear the bread you first had to climb into the bread straps and then the jam and and peanut butter was placed over top of our bodies.