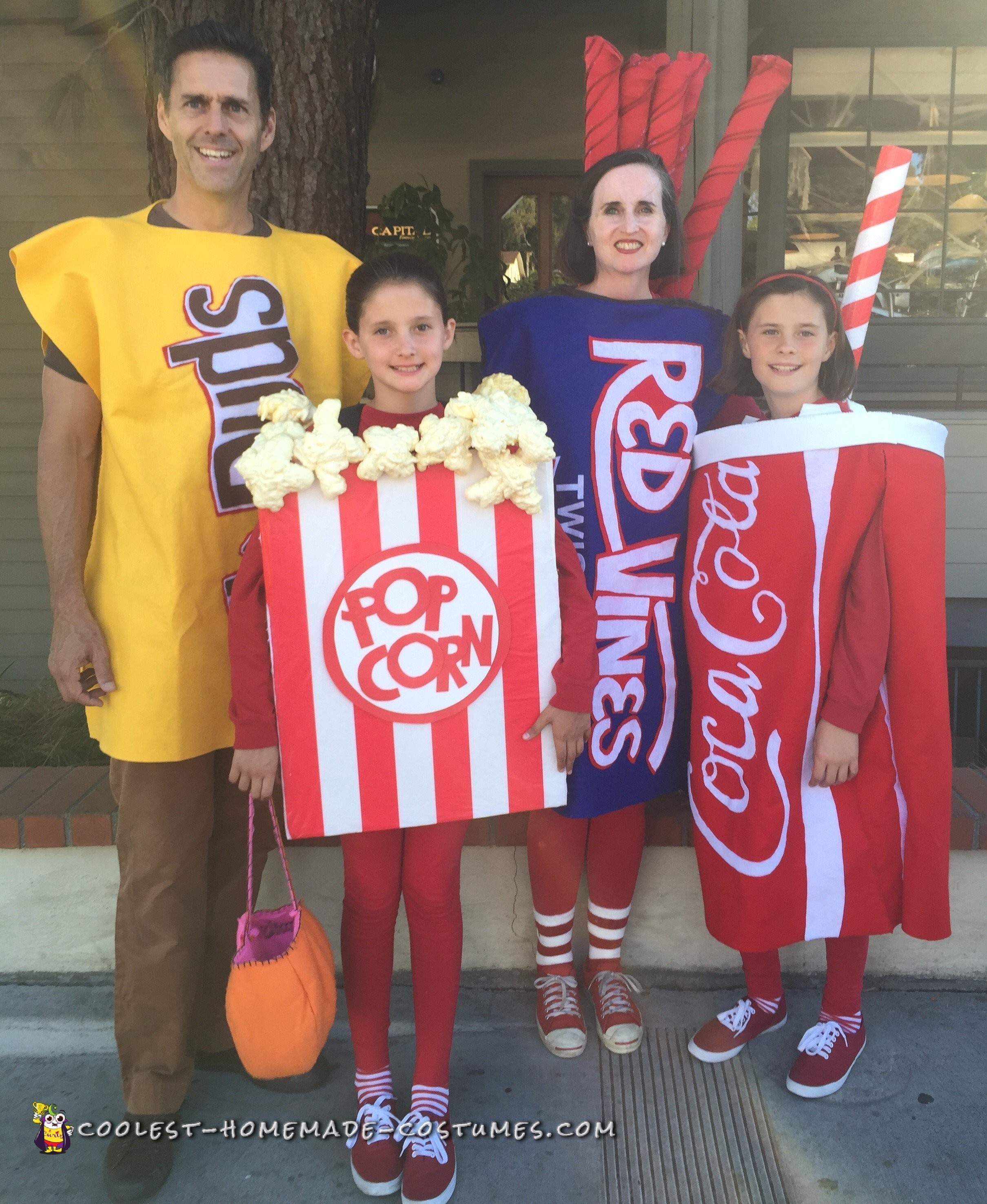 I have very fond memories of my mom coming up with fun and creative last minute ideas for Halloween costumes for me when I was a kid. Like a lot of moms, she did it by using everyday stuff from around the house and out of our drawers and closets.  My mom wasn’t necessarily the arts & crafts type, but Halloween brought out a really fun and creative side of her. She was such a busy mom with a lot of children. As the youngest child, I felt so lucky that she still had that creative energy left for me after so many kids and so many Halloweens.

Then I became a mom myself. I have twin daughters who are 11.

Since they were babies, it has always been so fun to dress them up. While we did buy store bought costumes for the first couple of Halloweens, I started trying my hand at making homemade costumes for them myself when they were 3. Then I caught the costume-making bug and have spread that disease to my whole family.

Twins are such a great palette for creative Halloween costume ideas. We started with the obvious “twin costumes” like Thing 1 & Thing 2 and Tweedle Dee & Tweedle Dum.  Then we started doing popular iconic pairings of things (mostly food) like Salt & Pepper, Peanut Butter & Jelly, Bacon & Eggs and Mustard & Mayonnaise.  I even turned them into S’mores one year. They loved it and their friends at school told them that they looked forward to what pairing our girls would come dressed as each Halloween. It has evolved to where my husband and I started getting into the act by joining them by adding on to their theme and trick or treating together in a family costume.

To me, coming up with the idea or costume concept is the most fun part of the process.  When we start talking about Halloween (usually in the summer), we often have a brainstorming of ideas around the dinner table. We toss several ideas around and decide as a family what would be the best.  Then we’re off and running.

I am not a seamstress at all.  In fact, I have a brand new sewing machine that is sitting unopened in its box in my garage.  I can stitch and glue though.  I prefer cute costumes to scary ones. My style of costume seems to lean towards a clean caricature style.  I don’t like too much stuff hanging off a costume.  We live in a warm climate so for practical reasons, I like to stay away from face paint and wigs or too many accessories.  I start with the structure. I like to find items that can help create a “base” or structure for a costume. Mesh collapsible hampers are great.  They are easier to work with and wear than cardboard boxes since they are lightweight and flexible and they aren’t too expensive. As far as fabric, I often use felt because it comes in all colors, is sturdy, inexpensive and easy to sew and glue. Every costume maker needs a good glue gun!  As far as design, I don’t use a pattern.  Admittedly, I eyeball most things.  But I think that imperfection is part of the charm of homemade costumes.  I also believe all the details count in a costume as they affect the overall presentation. The clothes and shoes you wear with or underneath a costume should be just as much a part of that costume.  I buy inexpensive long sleeved t-shirts, leggings or tights and matching tennis shoes to coordinate with my kid’s costume. Clothes and shoes should complement and not detract from the costume.  The good thing is that you can usually just absorb the clothes and shoes into your kid’s wardrobe after Halloween so you’re not wasting money there.

This year, we decided that the twins could be the classic pairing of popcorn and soda.

The minute we said it, I could see it in my head.  Adding to the theme of “Movie Food”, we decided the other movie snacks that would go along with popcorn and soda were Red Vines and Milk Duds.

That is what my husband and I would be.

How we made our costumes

To make the popcorn, we found an inexpensive collapsible mesh hamper that had backpack straps for carrying it. We turned the hamper inside out so that the straps were on the inside to be worn then and cut out the bottom.  We then stapled the hamper inside a box that we had covered with a red & white striped plastic table cloth from the 99 Cents Store. I had seen a friend use a spray home insulation foam product called “Great Stuff” to make foam for a latte costume the year prior, so we got a can at Home Depot.  It’s amazing how much it looked like popcorn when it dried.  We glued the “popcorn” to the top of the box and made a circular Popcorn sign out of craft foam. The whole thing was done in a day.  This costume cost about $20 total to make.

We also used a hamper to make the Coca Cola cup.  I cut out and glued the Coca Cola logo letters to the felt and stitched the in onto the circular hamper.  I made the lid using sturdy foam board and cut a hole for her head.  The side of the lid is made with craft foam.  The straw is a pool noodle covered in duct tape. Again, materials for this costume were less than $20.

We found two nylon under bed shoe boxes at the 99 Cents store. They were the right rectangular shape to look like a candy box so we stitched the two of them together.  I cut a neck hole and arm holes in the section that would be worn and a hole in the rear section that would hold the “Red Vines”. We cut out the logo letters and glued them on the front felt panel. Honestly, the hardest and longest part of this costume was stitching the felt onto each section.  Making the licorice was easy.  We covered 6 pool noodles with red opaque tights.  We then glued red yarn on the tops and wove it down dabbing it with glue to make the lines of licorice. We stuck them in the back section of the sewn together felt covered under bed shoe boxes. The materials for this costume also cost less than $20 to make.

We were honestly running out of time and decided to just make a rectangular shaped felt shift for the Milk Duds.  Copying the label, I glued the letters onto the felt and cut a neck hole and arm holes for my husband to wear.  This costume took less than 2 hours to make and cost less than $10.

All four costumes were done over the course of a couple of weekends.  The whole family gets involved and feels part of the process and outcome.  We have fun doing it all together.

Our Halloween Trick or Treating Tradition

There is a quaint shopping village in our town where the stores all open up and pass out candy in the afternoon. We trick-or-treat there after school every Halloween.  A local ice cream store holds a costume contest each year and twice we have won Best Family Costume. Our photo goes on the wall and our name is mentioned in the local newspaper.  It’s a thrill for our daughters and it makes all the hot glue gun burns worth it.

My mom was my inspiration to start having fun with my kids making Halloween costumes.  She is 96 now, but she still dresses up for Halloween.  I love that side of her.  Happy Halloween Mom! 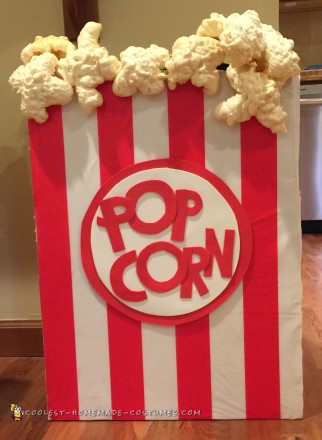 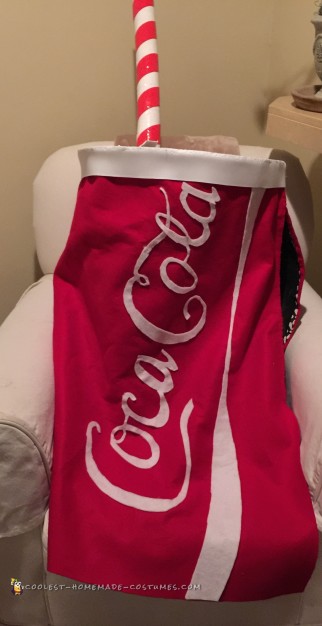 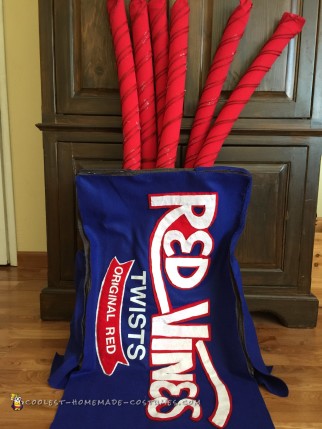