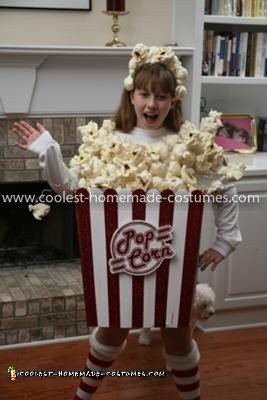 I’d like to share with you Alexis’ Coolest Popcorn Costume, a costume we made with the help of Coolest-Homemade-Costumes.com.

Originally, we tried to make popcorn from foam padding, but we just couldn’t get the results we wanted. Using Coolest-Homemade-Costumes’ selection of popcorn costumes, we found that others had gotten good results using “Great Stuff”, and so we gave it a try.

Where Alexis’ costume differed from the others is that she wanted to make individual giant popcorn kernels, rather than spraying foam into the top of her “box” of popcorn. To accomplish this we created two-layer pieces of popcorn, first spraying the “Great Stuff” into patterns of X’s and stars, and, once that had dried, putting a second layer consisting of a large ball of the Great Stuff up on top. We found that when sprayed on ordinary plastic wrap, the pieces will easily pull off after about an hour of drying time.

To add realism, we made the popcorn pieces with a curved bottom, giving them an uneven, random look. To accomplish this, instead of spraying the Great Stuff onto a flat surface, we found a large cardboard tube, wrapped it in our plastic wrap, and laid it horizontally between two sawhorses. The curved surface was simple to work on, and once a row of popcorn pieces were sprayed, we could simply rotate the tube and continue spraying more.

For an extra touch of realism, a few pieces of the popcorn were cut out on their bottoms with a small razor knife, and yellow and brown “kernels” were painted inside. Extra pieces were hot glued to a headband to complete the outfit. 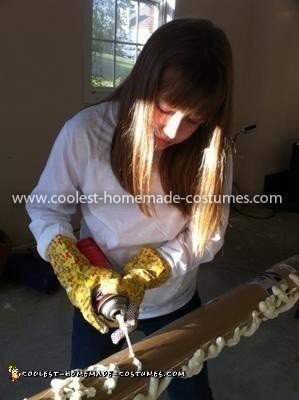 Coolest Popcorn Costume Made by an 11 Year Old!