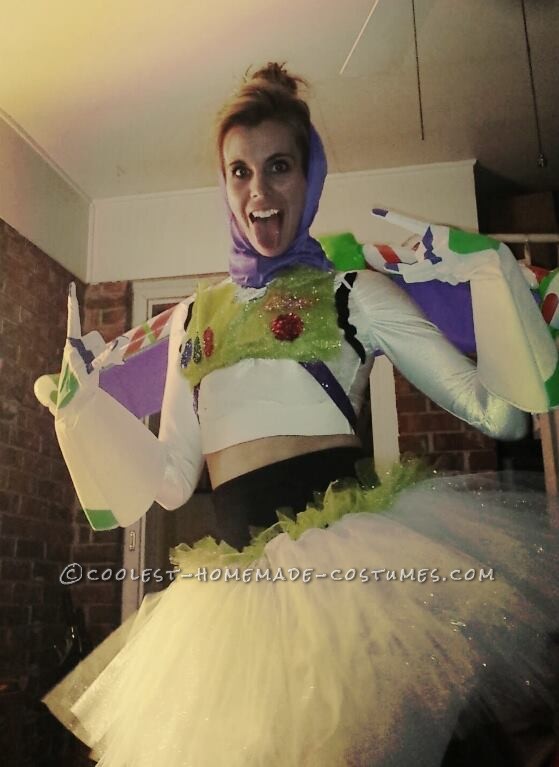 Ever since our trip to Disney World earlier in September, my kid was fixed on being Woody from Toy Story for Halloween this year. Since my kid is 4, he wanted me to dress up as Buzz Lightyear. I remember sitting at my desk attempting to do my nightly homework when I took my pencil and paper and started drawing. I was very pleased and inspired by my drawing. I knew exactly how I wanted my costume to look, and then I had to brainstorm how to make it happen. I started thinking about my sewing skills ( lack there of), and paniced. I never learned how to sew, nor did I own a sewing machine. I went to plan B, thanks to the internet I was able to look up how to make a non sew tutu on YouTube.

I was now prepared to make the skirt, so I go to my local store and buy tule and ribbon I needed. I was so happy that all I had to do was measure my waist and cut the ribbon to size. Then decide how long I wanted the skirt to be and cut the Tule that length. I then tied the Tule in knots around the ribbon and tied off the ends to tie around my waist. Now it was time to move onto the top. I had the perfect turtle neck shirt I once used for cheerleading. I then used my extra green tule from the skirt to mock the top of Buzz Lightyears shell. I used my kids actual Buzz doll for reference to the color, patterns, and positioning. Now I have it laid out how I wanted it, it came back down to I did not know how to sew. I was a little lost as to how I was going to attach the shell to my top. I then thought about my hot glue gun. I burned myself penty in the process but it did the trick. For the buttons on the shell I ended up using Elmers school glue and glitter and it turned out better than I could have imagined.

The purple hood, gloves, and wings were ordered from Walmart.com. The gloves were huge on me since they were made for men. I had to use saftey pins to make them fit my tiny arms and hands. In my original vision I wanted white knee pads, but I was never able to find some cheap enough. For the black mid-section I used a pair of highwaisted spandex shorts, and my legs were covered by white tights. I used my winter white snow boots, but cut a white sock and pacled it over the lace section of my boots to hide the “fur” around the top of the boot. I also placed glow bracelets around my ankles for the affect of glow in the dark Buzz.

I came up with this version of Buzz because there are no female versions available to buy. I refused to go out looking like a baggy man. I wanted to be original, sassy, and cute. I was not going for the overly sexy style because I was with my kid. The reaction I got from this costume was more than I could have ever dreamed of. Strangers were commenting how cute it was. I had three strangers stop and take my picture. A policeman who was directing traffic in town was smiling so big. People loved my version of Buzz. I really enjoyed the people who called me ” Ballerina Buzz”. I made my kid so happy and proud to be with me and that is the best prize anyone could ever give me. The effort put into this costume was well worth it and I would do it all over again. This was the best Halloween yet for me. 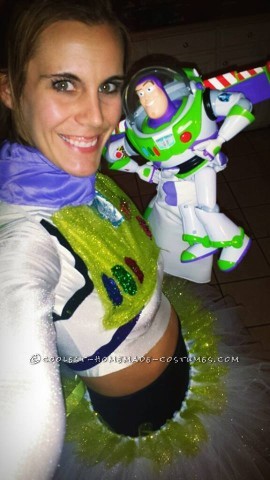 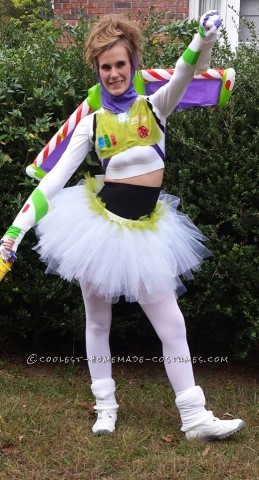 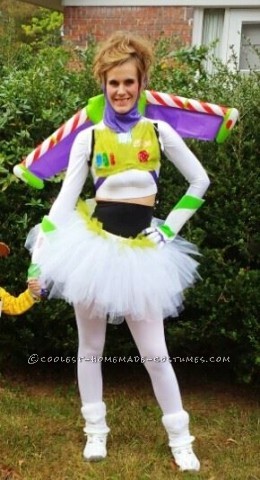