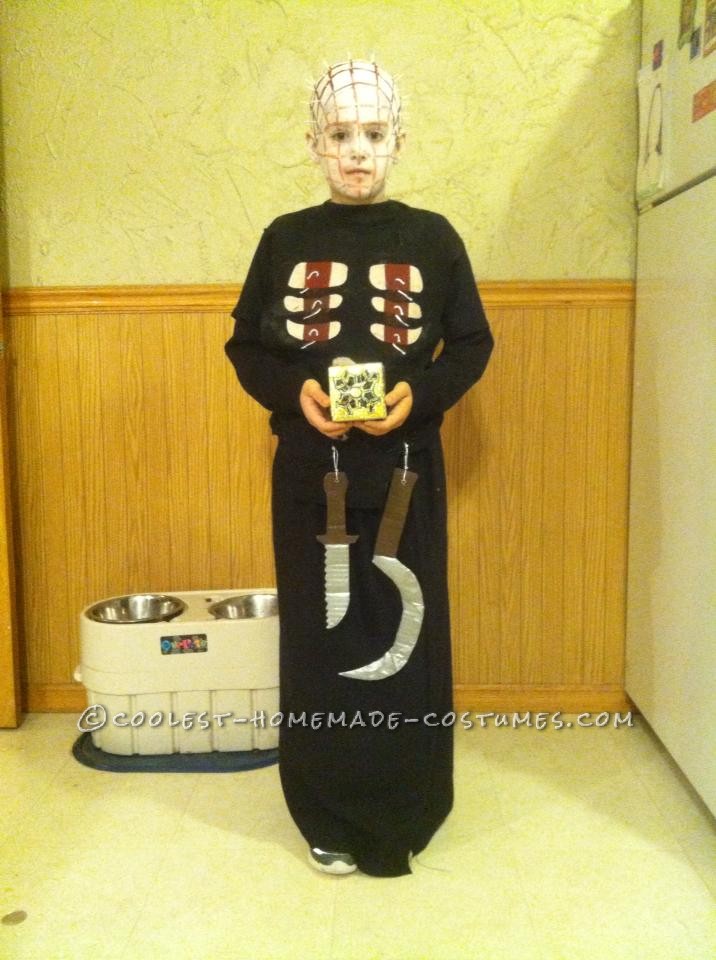 My kids LOVE Halloween, and the scarier the better! We were visiting a Halloween store and my 9 year old daughter sees a costume for Pinhead from Hellraiser the movie, she says “mom, can I be this?” My thought was “Whoo Hoo, finally a great costume to make!” I say, “yes, I will make you it, no problem.” So, I bought a bald cap and liquid latex at the store and off we went.

I began with making a plain long black  skirt out of old black material I had, and then began on making the front of the chest for the costume on a plain black t-shirt. I took some flesh colored iron on patches and ironed them on the front of the shirt to look like torn flesh and painted then down the center of each with burgundy paint to resemble the tears. I  used silver ribbon to make “hooks” and sewed them onto the flesh tears. I then  attached a small chain onto the stomach area to hang a homemade knife and sickle from (I made  the weapons out of cardboard and painted them). This was all crazy easy and I used things that I had at my house already.

Then came the hard part-how I was going to do the head because my daughter had THICK long hair, and pinhead is bald. So, I painted the bald cap that I bought white with red “cut marks” 1 inch apart all over. I then pushed hair brush bristles through the bald cap to resemble the nails in Pinheads head. I covered the bristles inside of the cap with tape so that they did not fall out or pull my daughter’s hair when I put the cap on her. This step took a while to do. After I put the bald cap on her head I attached the cap onto her skin with liquid latex and waited for it to dry. When it dried I then used white and red makeup to paint her face, when the paint dried I attached hair brush bristles on her face with the liquid latex. It turned out awesome!!!

We went to a Halloween party at her friend’s house and all of the adults were amazed at how great it was and realistic the the character in the movie (and no, my daughter has not seen the movie…she just thought the costume looked scary). I even made a Pandora Box and used gold metallic wrapping paper and drew the designs on it to resemble the one in the movie. She won the prize for scariest costume at the party. While trick-or-treating in the neighborhood A LOT of houses commented on how great she looked and said that the costume reminded them of just how scary that movie was.

I did not take all the step pictures (sorry), but it is fairly easy with the exception of the cap (and if you’re bald-no doubt would be even easier-just some liquid latex hair brush bristles). I had a blast making this costume, and even more fun seeing peoples reactions to it.