My 5-year old son has a crazy-dedicated obsession with BigFoot.  Daddy’s bedtime stories tend to star the big guy, who always decides to befriend my son. My son thinks those stories are real.  His favorite movie is “Harry and the Hendersons.”  So it was no shocker when he wanted to be Bigfoot this Halloween.

Problem was- where do you find a Bigfoot costume?  A quick Google search came up surprisingly empty. Gorilla, monkey, and Abominable Snowman costumes, but no BigFoot.  So no-sew me decided I had to take this situation into my own hands.  My kindergartner cool-factor depended on it.

My first step was to go to Joann Fabric.  They had some sweet fur fabric (I got the Grizzly Bear style) that was 40% off.  Plus, I had a 20% off entire purchase coupon, so my entire purchase (I think I bought about a yard, maybe a little more) came to under $8. The scientific method I enlisted for determining how much fabric to get came from laying out a pair of my son’s pajamas on the bolt of fabric in the store and guessing at how much I might need.

I then went to Goodwill. They had a pair of tan, rubber work gloves for $1.  My Big Feet. Score!  That brought the total cost of this costume to LESS than $10!!!

Once home, I again used my son’s pajamas as a template, doubling up the fabric to create a front and back of each leg.  I added a big of extra fabric for the butt when cutting them out.  Do you like how precise I am?  I then stitched up the inseam of each leg and then sewed them together.  I folded over the top with some elastic in the middle to hold them up.

I did the top the same way- using my son’s pajama top as a template.  I wanted a hood, so I took my son’s jacket and used the hood as a template for his Bigfoot head.  I cut the left and right side of the hood separately.  The shape was a little weird, due to the fact that by this point, I was running a bit low in fabric, but then again, Bigfoot isn’t known for winning beauty contests, so I was OK with that.  When I sewed the two sides together, and folded the outside edge in a bit and sewed it shut, it made for a lovely and realistic looking scalp. He even had a bit of a cowlick. Awesome.

Big Foot is hairy from head to toe, so I made a beard out of some remaining fabric, attaching it to his face by pounding metal grommets into the side of the beard and tying elastic to them.

The gloves were originally going to be pulled over his shoes, but there’s no way he’d make it through Trick or Treating without tripping every other step. So instead, I cut out a large section of the palm of the gloves and pushed his foot through so that the glove rested on top of his shoe. I also glued a triangle patch of fur to the top of each glove.

The costume was completed with a pair of brown magic cotton gloves.

The whole kit and caboodle took me all of 2 hours, hand stitched.  He loved it, and best of all, it was warm and toasty for the chilly Wisconsin Halloweens.  If I can do it, so can you.  ROAR! 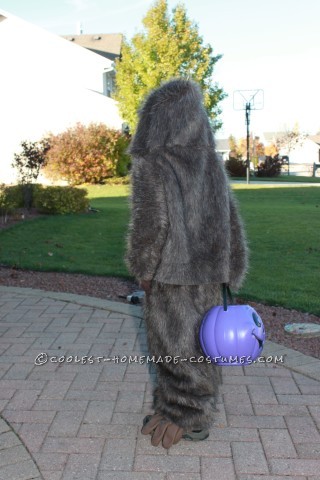