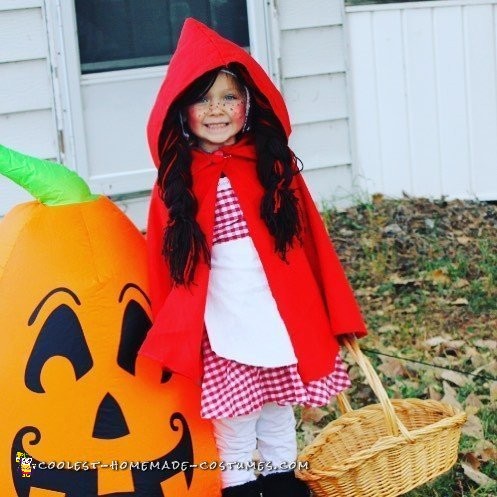 This homemade Little Red Riding Hood costume was a super sweet costume that did not take a lot of time or money.  We got a lot of compliments and it was a nice “girly” costume, which my daughter wanted, without being just another princess!

This was the biggest job.  I bought a swatch of red flannel (I chose flannel purposely to act as a heavier layer, as Halloween can be quite cold here in Canada).  I loosely followed a tutorial I found on the internet (Google it) to get the shape of the cape and how to do the hood.

Once I had the flannel cut, I used fabric glue to make the hood, attached it to the cape, and then glued a small seam around the edges to prevent fraying.  I attached some sticky Velcro pieces at the top to fasten it together, but the Velcro did not stick very easily, so I ended up just using a safety pin to keep it closed. In hindsight, I probably should have sewed a piece of ribbon in, but the safety pin worked well enough for this Little Red Riding Hood costume.

Again, our Canadian weather came into play here.  I knew it would be chilly enough that my daughter would need something to keep her head and ears warm, but I thought simply wearing a touque would take away from the costume, so I came up with a yarn wig that I think really gave the costume something special.

To make the Little Red Riding Hood costume wig I followed another online tutorial using pieces of long brown yarn and adding a few red pieces at my daughter’s insistence (for highlights). Since I don’t have a sewing machine, I hand sewed the yarn to the felt which was a bit tedious but worked. Once the wig was made, I attached it to a brown knit hat and voila… my daughter was warm and cozy!

I found the red and white checkered dress on Ebay for a really good deal (listed under Girls Summer Dresses). For the apron, I bought a simple piece of white cotton, cut it into an apron shape, and used fabric glue to attach a white ribbon to tie around her waist.

Putting the Costume Together

To create the full Little Red Riding Hood costume, I added some freckles using brown eyeliner, and lots of pink blush.  The basket we already had, (though they can be found for super cheap at second-hand stores) and doubled as a trick or treat bag.

I loved how it all came together, and how much fun I had making it! 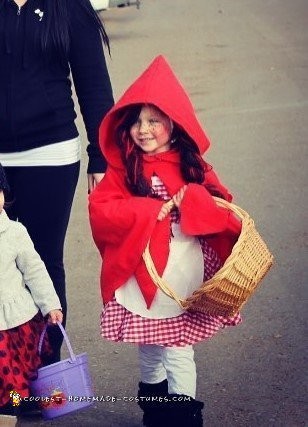