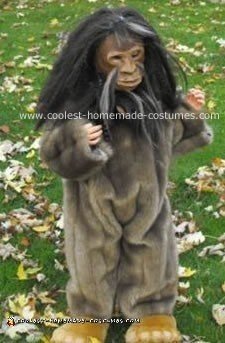 I think this has been the best costume I have made yet. This year my son had a strange Halloween costume request for a 3 year old, Bigfoot! Ok! It was impossible to be able to buy this costume in his size so I knew it was time to put my creativity to the test and make my own Homemade Little Bigfoot Costume.

I started with the idea of making a mask out of paper mache. I have never done this before but I knew I could Google up a good paper mache recipe from the internet. I found a recipe that called for flour and water. I thought this was perfect because it was so inexpensive. I wanted to try and make this costume for less money as I could. Before getting started on the mask I went to Joanne’s Fabric and bought a plastic mask used for painting and decorating. I thought I would use this as a mold.

For the paper mache recipe you just mix flour and water until you reach the consistency works best for you. I made it very thick. I used an old news paper laying around the house and ripped them into small and medium pieces. I then put the first layer of paper mache over the plastic mold and let it dry. I continued this another three times. I was then able to pop off the paper mache mask off the plastic mold.

Now it was time for me to start building up the paper mache around the eyes, mouth, and nose. I also Googled up Bigfoot photos to help me get a good idea on how a Bigfoot might actually look like. When I got the mask the way I wanted it to look my husband drilled holes(nostrils)in the nose so my son could breath. I then sanded down the mask front and back to make it smooth. It was time for painting. I then used a wig from another old mask I already owned for the hair. I just cut the face out and hot glued it to mine. I cut the hair and mixed another shade of hair from another mask I owned.

For the suit I went to a Goodwill store and found a fur coat for $19.99. My mother helped me with the sewing. I cut it to fit my son and the sewing began.

I also made gloves for him too. I had a pair of tan gloves that matched the color of his Bigfoot feet so I just took some dark brown paint and painted finger nails on them.

For his Bigfoot feet I used Bigfoot slippers that were given to him by his uncle. They were purchased at a Six Flags.

This Homemade Little Bigfoot Costume really came to life when my son put it on. He looked so real in it. This was truly a costume everyone loved. 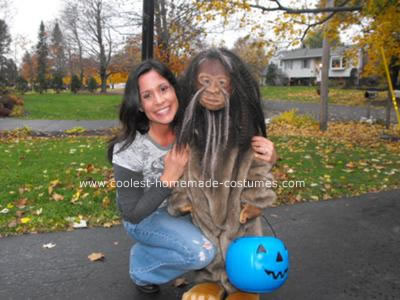