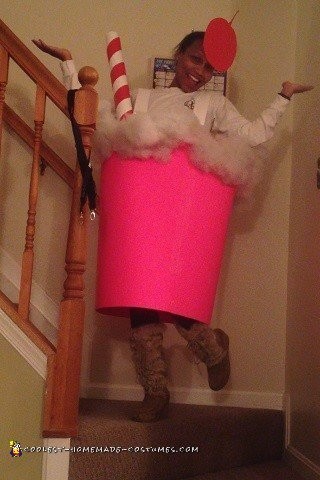 My quick, easy and super cheap milkshake costume was inspired by a trip to a gas station-convenience store that sold milkshakes. There was an over-sized milkshake on display and immediately I knew I wanted to be a milkshake for Halloween. My friends got a kick out of my costume because they view me as a health nut, and thought maybe I’d be a fat free smoothie instead of a milkshake. But unlike milkshakes, Kelis never sang about any smoothies bringing any “boys to the yard.”

Trick-or-treating with my kids was FUN! I had Kelis’ song, “Milkshake” ready to play on my phone. All it took was for one group of adults handing out candy at one of the houses to compliment my costume, for me to say “hold on, you need the FULL effect.” Then I played Kelis’ “Milkshake” and ON THE SPOT, and much to my daughter’s horror, I got TOTAL STRANGERS to ‘milkshake dance’ with me in their driveway! For a few seconds it was dance party central, before we left everyone standing there (the adults handing out candy, and the group of trick or treaters and their parents in line, waiting to get their candy) with smiles and laughter.

By the end of the night, I was able to get FOUR “houses” to “milkshake dance” with me!! As the kids and I were walking to one of the homes, 2 teenage girls asked me as they approached, “are you a milkshake?” When I said “yes,” THEY started to sing the milkshake song. That was all I needed to hear before GAME ON. I immediately played “Milkshake,” and the 2 teens and I “milkshake danced” in the middle of the sidewalk!

When the kids and I got home by 8:30 pm, I called this bar and grill to find out about this DJ costume contest I saw advertised — $250 cash prize. Surely my costume WITH my music stood a chance! “9 pm” the lady said. “Kids, get in the car — we’re going out for dinner!” I said.

Once we got there, we discovered the contest was actually 10 pm- midnight. Realizing that I probably didn’t want to expose my kids to some of the costumes that might come out that late, AND having my kids at a bar until midnight wasn’t worth $250, I decided to nix the contest. Plus my kids were tired, so we ate our dinner, and we called it a night.

I may not have taken home $250 that night, but my ‘payoff’ came in getting total strangers to “millkshake dance” with me. Having generated laughter, while putting smiles on people’s faces — best Halloween take home “treat” of the night for me!

The materials I used to make my milkshake costume:

* 3 large bright pink poster boards (the body of the milkshake)

* 1 large white posterboard (for the straw, and the straps)

* 1 large red posterboard (for the straw’s stripe, and the cherry)

* pillow batting (for the “whipped cream”) 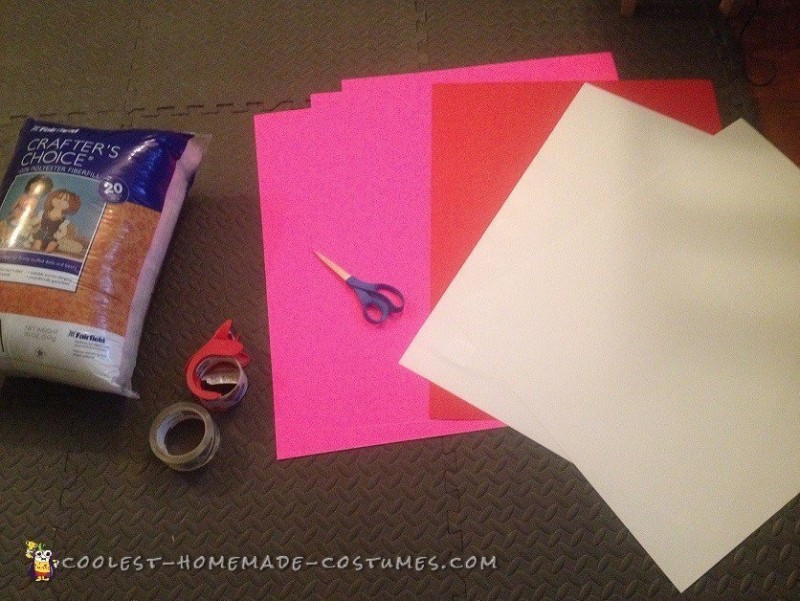 For the body of the milkshake, I taped together the lengthwise ends of the 3 large pink posterboards, so that they formed a cylinder.

For the straps that would hold the cylinder up around my body, I cut 2 long, lengthwise strips from the white poster board. I put the cylinder over my body and lifted it to just below my armpits, just to see where I needed to tape my straps. Because I was taping the straps to the inside of the cylinder, it was ok if  I tore some of the posterboard as I lifted the tape to readjust the straps, retape. Once I had the straps where I wanted them, I lifted the cylinder up and over my head, and put it on the floor so that I could add the straw and the “whipped cream.”

To make the straw, I took the remainder of the white posterboard, and rolled it into a smaller cylinder. The diameter of the straw is up to each person’s preference. I preferred a thinner straw so I rolled my cylinder a little tightly, and taped the edge down to the body of the cylinder.

I taped the straw to the inside of the pink cylinder.

For the whipped cream, I double backed my tape and taped around the outside top of the cylinder. I ripped and pulled pieces of pillow batting apart, and adhered it to the tape. I also used spray adhesive to secure the pillow batting. If I had a glue gun, I probably would have gone that route.

The Cherry on Top of the Milkshake Costume

The final “cherry on top,” was a huge cherry, including stem, that I drew onto the leftover red posterboard. Once I cut out my cherry, I double backed tape and stuck it to the body of the cherry, and in turn stuck that cherry to my forehead. For that I’d just stick with tape and NOT have gone the hot glue gun route. ;-) 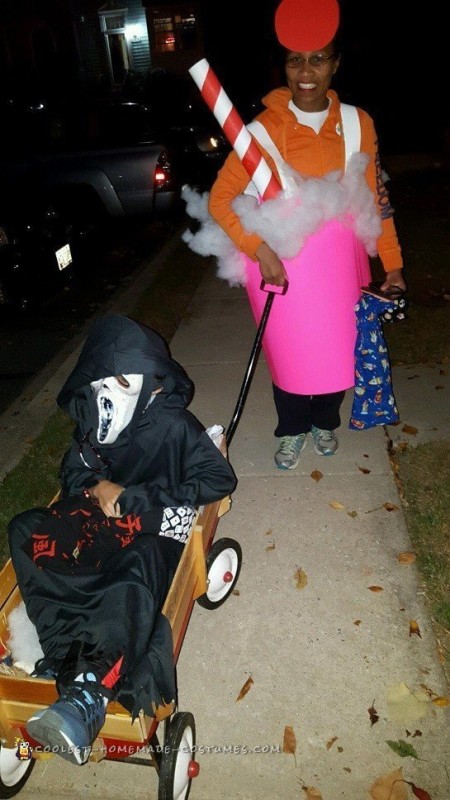