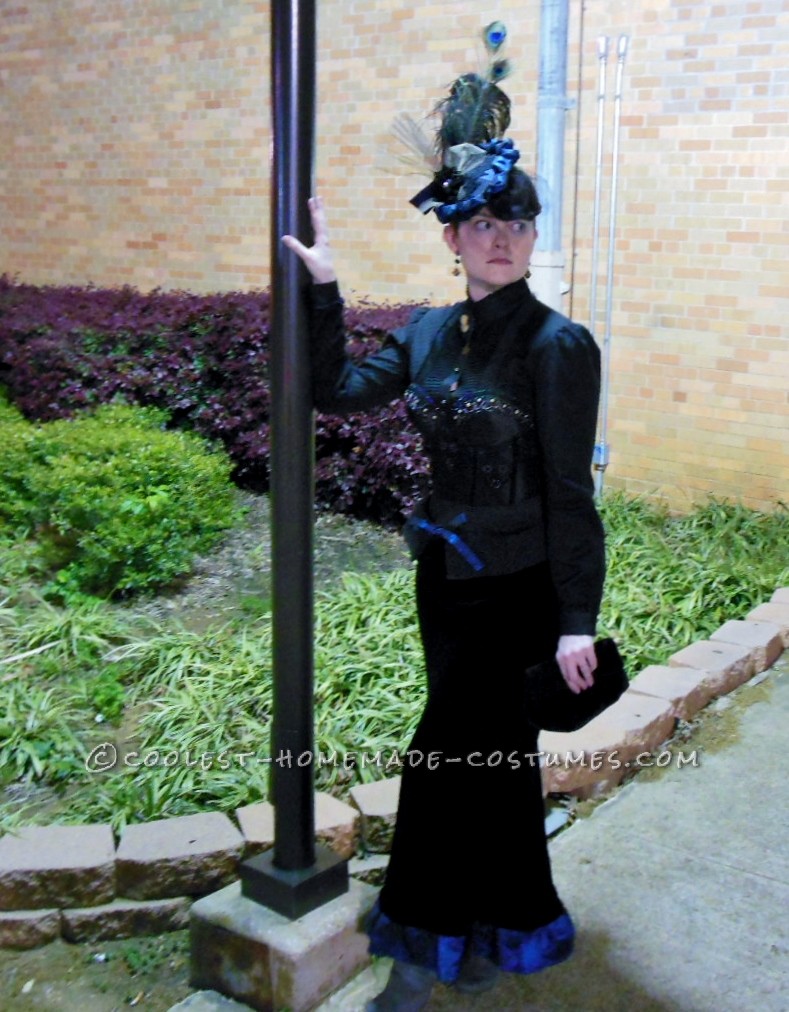 My dear husband took me to a dance held by the UTA campus’s library staff (those cheeky librarians!) called “An Evening in Paris: Dancing at the Moulin Rouge.” We knew there would be a costume contest, and he and I both love any excuse to dress up. Fortunately, the hubby already owns a kilt suit, which he wore for our wedding, so I was able to purchase a top hat, and sew a double breasted brocade vest for him to make the look more Victorian. I have the best husband ever – he owns a kilt *and* he lets me dress him in costume.

Although I already have a basic steampunk costume, I decided this event called for fancier dress! I decided to start from scratch and create a neo-Victorian look that I can continue to add to in the future. So, I began raiding my craft room for supplies. I had a long velvet dress to turn into a skirt, blue iridescent taffeta left over from another costume, some black and gold tulle, a plain black bustier (rawr,) a black ostrich feather and a few peacock feathers, some lace trim, and lots of beads. I didn’t have enough fabric to make a shirt, so I made a couple of trips to local thrift stores and found a black, Victorian style shirt that fit perfectly under the bustier, even creating a little bustle effect in the back.

I began by beading the bustier, using iridescent blue, black, green, and gold to match the peacock feathers and taffeta. I didn’t have a particular pattern in mind, so I just began beading away, using black cotton thread, a tiny needle, and lots of patience. I decided to add some velvety trim down the boning, and cut out some of my lace trim to add to the bodice. Any time my husband and I sat down to watch a show on Netflix, I was beading that thing. I even took the supplies with me when we visited my brother in law to watch “The Hobbit” together! (Luckily, he’s used to my projects, and it took him most of the night to ask me what part, exactly, that was in my costume.) It took a couple of weeks of working on and off to get to a point that looked finished to me.

When I wasn’t beading the bustier, I had begun creating my fascinator/hat from scratch. I cut a teardrop shape from some recycled cardboard, cut a slit halfway up, and overlapped the two points, creating a dimensional base. Then I brought out my hot glue gun and attached some of my blue taffeta. I just kept building on top of that, adding some hand beaded lace trim, black and gold tulle scraps, a black tulle veil, flower made from suede trim and coordinating crystals, the feathers, and, eventually, a ruffle around the edge and a bow in the back. I covered the bottom with a scrap of black felt, and sewed two hair clips to attach to what little hair I have. (I have a “flop hawk,” so the sides and back of my hair are shaved.)

While the glue was drying on my fascinator, and on my fingers, I worked on my jewelry. My mom gave me a beautiful cameo, which I set into the same suede trim I used for the flower on my hat, and beaded a “setting” using the same green, blue, and black beads I used for the bustier. I remembered seeing sets of Victorian-esque charms at Michael’s for $2, so I stopped by on a day I was already running errands to pick up some Victorian crown charms. I added one with an antique gold finish, paired with a crystal, dangling from the bottom of the cameo, placed a circle of felt on the back and added a pin. I wore the finished pin at the base of the collar of my shirt. I added matching crystals to a pair of earrings I already had, also in an antique gold finish, so they matched the pin perfectly.

A few days before the dance, I sewed my husband’s double breasted vest and cravat (neck tie,) and, the day of the dance, I reconstructed my velvet dress into a trumpet skirt and added a ruffle of taffeta to the hem to lengthen it. I was sewing until the very last minute! I was working so quickly that my hand slipped, and I jammed a pin under my nail. There were literally blood, sweat, and a few tears over this costume. I even had to stitch some of the button holes on my shirt, as I was wearing it, because some of them were too large for the small buttons. I know the dance was Moulin Rouge themed, but I really didn’t want to be flashing anyone on the dance floor.

My makeup was simple: concealer, pale pink eyeshadow, mascara, a little gold eyeliner, blush, and plum lip stain.  A week before, I dyed my hair with Manic Panic’s “Purple Haze,” so there was still a purple hue to my hair, which looked cool in combination with the costume. Not necessarily period appropriate, but cool. As I put on my makeup, the hubs went, in costume, to Wendy’s for ye olde hamburgers to scarf down before we left. We stood at our kitchen counter, because I was paranoid I’d get condiments or grease on our clothes.

As we walked across campus to the library, we received some pretty funny looks, and even a laugh or two from some international students. The library was decorated in a red and black theme with Victorian can-can posters, balloons, a large cutout of the Moulin Rouge windmill, and a copious amount of sparkles. There was even a matching candy bar with the movie “Moulin Rouge” playing on a screen as the backdrop.

The other costumes were fantastic! We instantly started receiving compliments, and were asked by several strangers if we would take pictures with them. Just when we thought we wouldn’t know anyone there, we ran into our friend and his date, dressed in Napoleonic inspired costumes. We also ran into one of the campus newspaper’s journalists, who we’ve done an article with before, and she asked us all about our costumes. We entered the contest along with 40 other entries (some individual, some couples,) and were selected for the top 6. We got to step in front of the audience to see how much applause we could get, so we hammed it up. The man in the couple ahead of us twirled his date elegantly. So, instead of my husband twirling me on the dance floor, I twirled him, which got lots of applause! (What’s a kilt for, if not to twirl?) We ended up winning the first place prize! It was so nice to be rewarded after all that hard work. My husband was so proud that he made sure the audience knew how much I made by hand. Everyone congratulated us, and the couple who won second place even asked how much we spent. We both ended up spending around the same amount $30-$35. We got a high five for that one.

So, we danced the night away and had a wonderful time. On our way home, instead of weird looks, we had a bunch of people ask where we’d come from, and tell us our costumes were awesome. I even got a “Holy sh!t!” from a girl in the elevator when my husband said I’d made his vest from scratch. We received a call later from our friend at the newspaper, asking us for an interview about winning first place.

All in all, the effort was worth it! The response to our costumes and “performance” was great, and we had a blast dancing and talking with the other guests. I can’t wait to add to my bustle, and I think I’ll even make a parasol, because we will be wearing these costumes again! 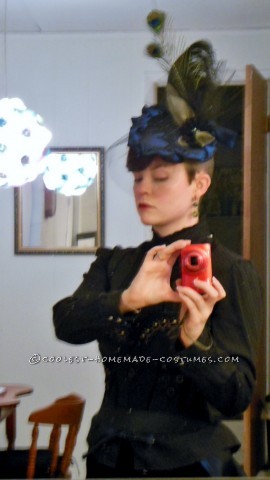 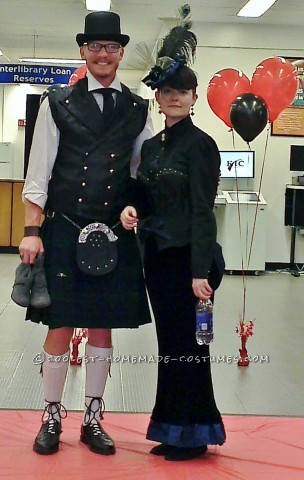 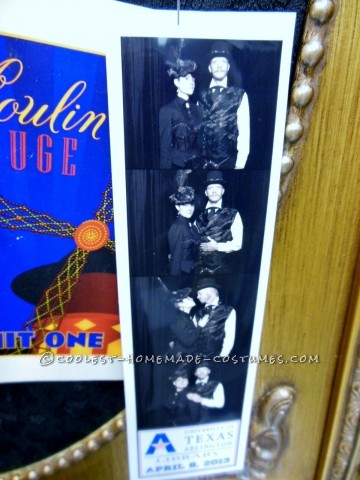 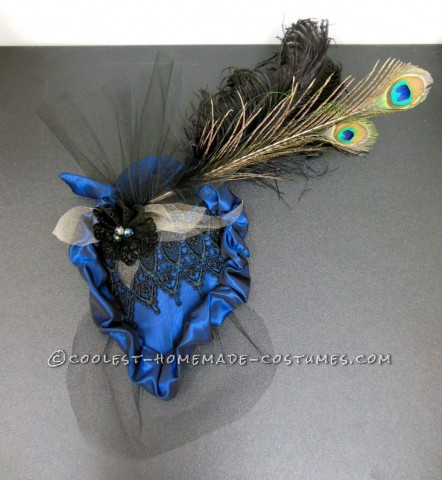 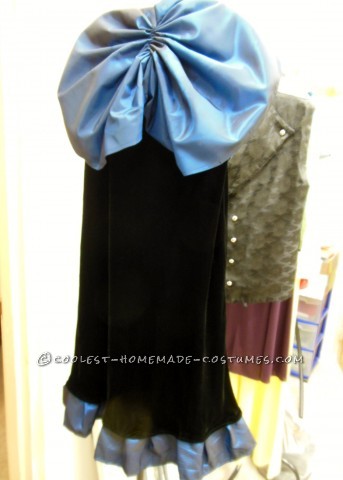 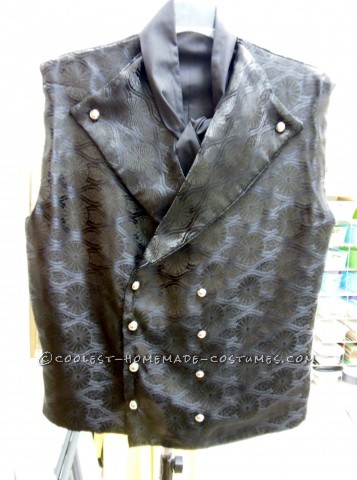 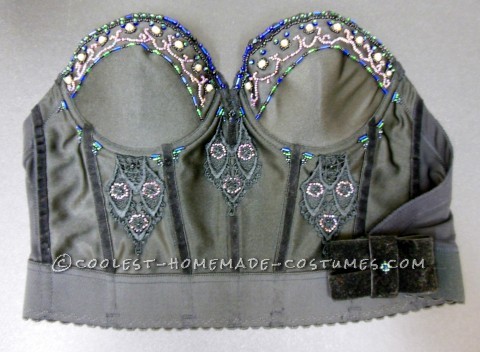