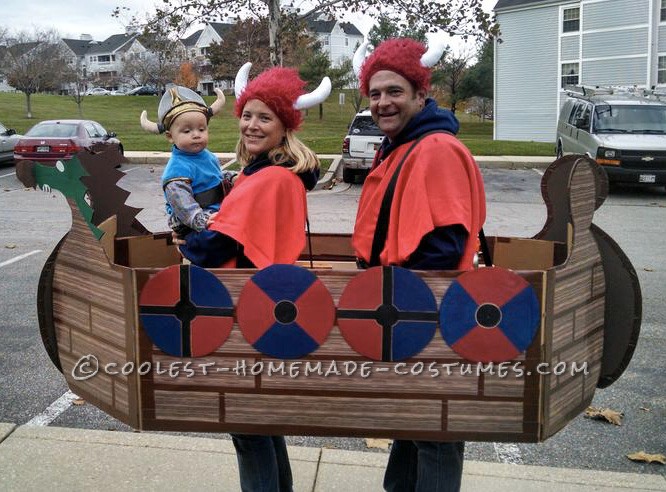 While I was pregnant, my husband and I struggled to agree upon a name for our son. Knowing my family is from Iceland, my husband thought it would be funny to come up with a Viking name as a joke for our unborn child. Ragnar became his term of endearment for his unborn son. This year, when I was deciding what to do for Thomas’ costume, I thought it would be cute for him to dress up as Ragnar! I mentioned to my husband that it would be funny if we were the boat and he agreed, so we took off from there. To start, my husband made a rough sketch of the boat and the frame. 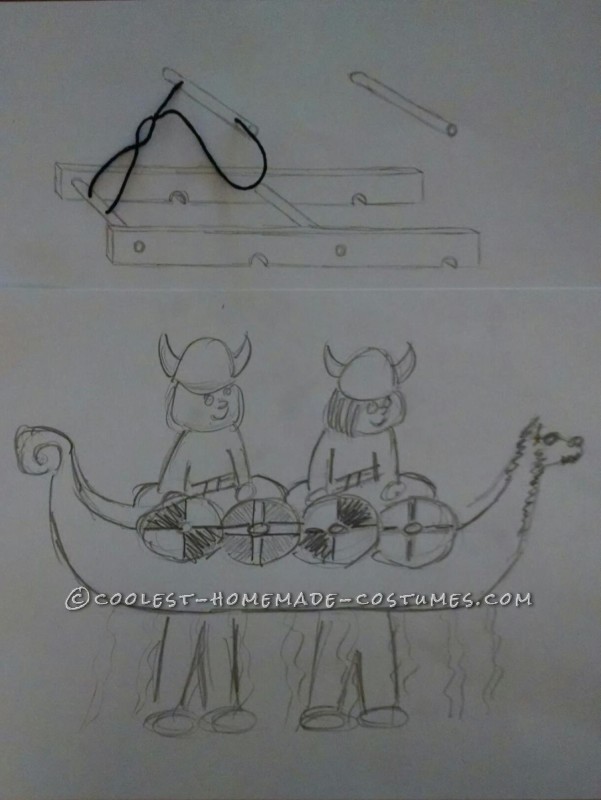 Step One: Making the Frame

The frame was the most difficult part to assemble, as we wanted to have the boat secure but also allow enough space for my husband and I to carry our one year old. My husband came up with the idea to attach suspenders to wooden dowels, and created a latch with leftover scraps of wood. We cut all of the wood to size and used wood glue and screws to secure the frame. Both my husband and I were able to pull the wooden dowels, that were attached with suspenders, over our heads and secure the dowels in front of us with a latch. We used clamps to secure the frame to the boat. Since we went to several locations Halloween night, we needed the ability to break down the boat to fit in our car. The frame took roughly four hours to complete. 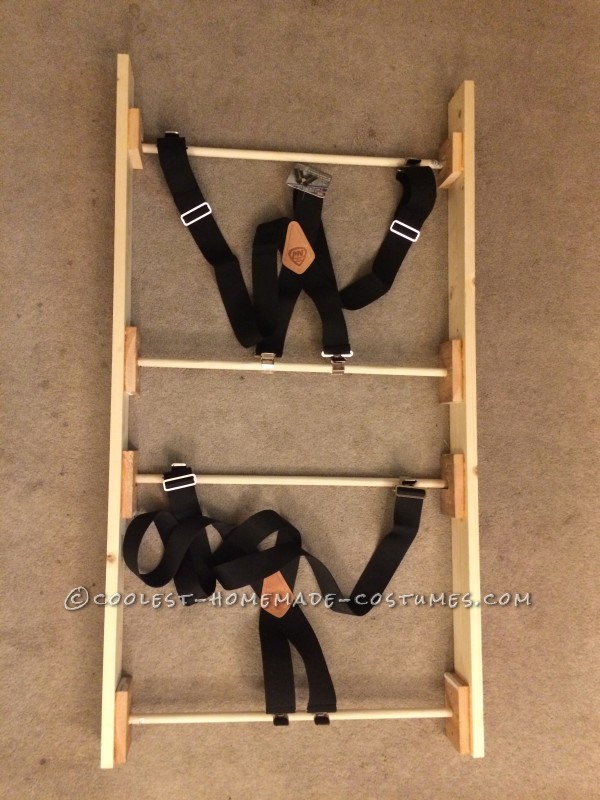 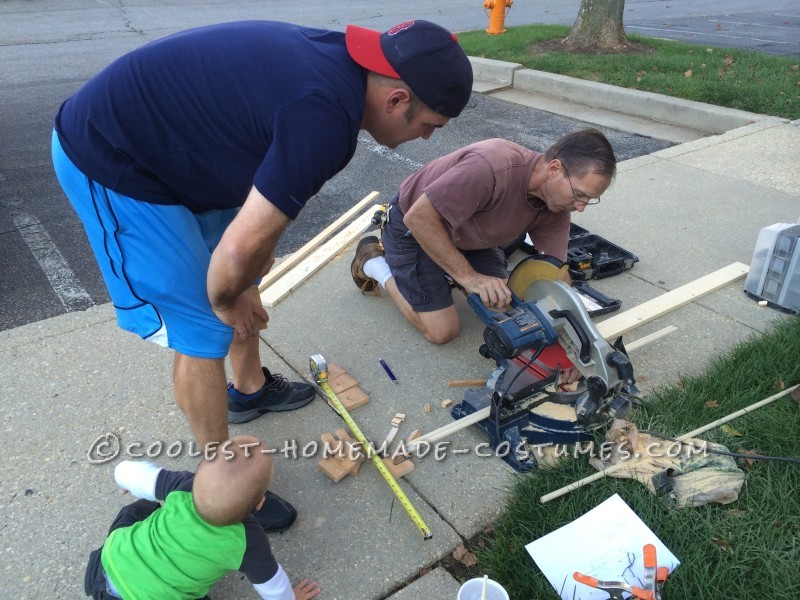 The boat is primarily made of cardboard. We used a wardrobe box and then built a frame inside to fit it.  We cut out two rectangular pieces for the sides of the boat, then drew and cut out the two dragons and the two end pieces and began to duct tape those pieces in a wood-like pattern. Cutting and duct taping the outside of the boat took about five hours because we first had to frame the cardboard with solid brown tape, then apply the wood grain duct tape to look realistic. 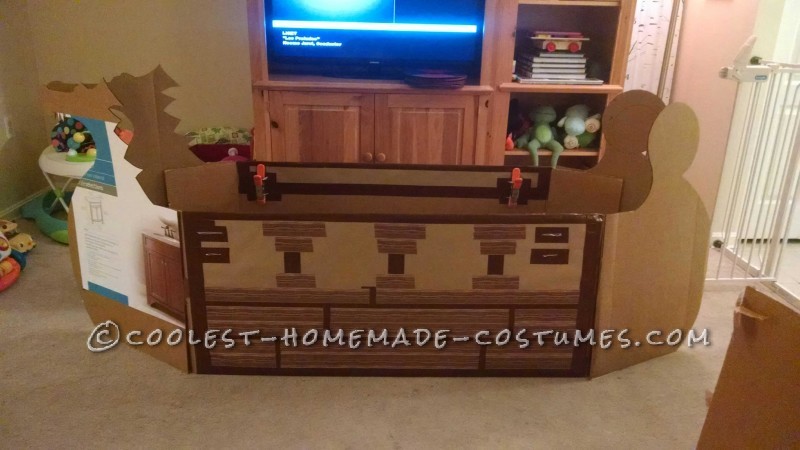 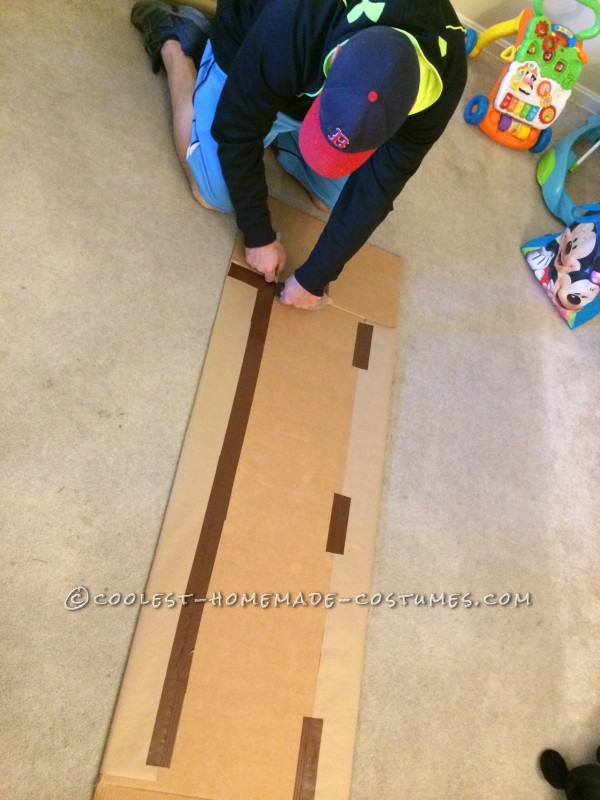 To decorate the boat, we used wood grain duct tape, brown duct tape, and acrylic paint. The frame is connected with this metal wire and clamps. Next, we cut out eight circles from the wardrobe box to make Viking shields. We painted them red, blue and black to match our outfits. We used acrylic paint, and at this time also painted the top of the dragons’ heads. Painting went relatively quickly, but still took about two hours. 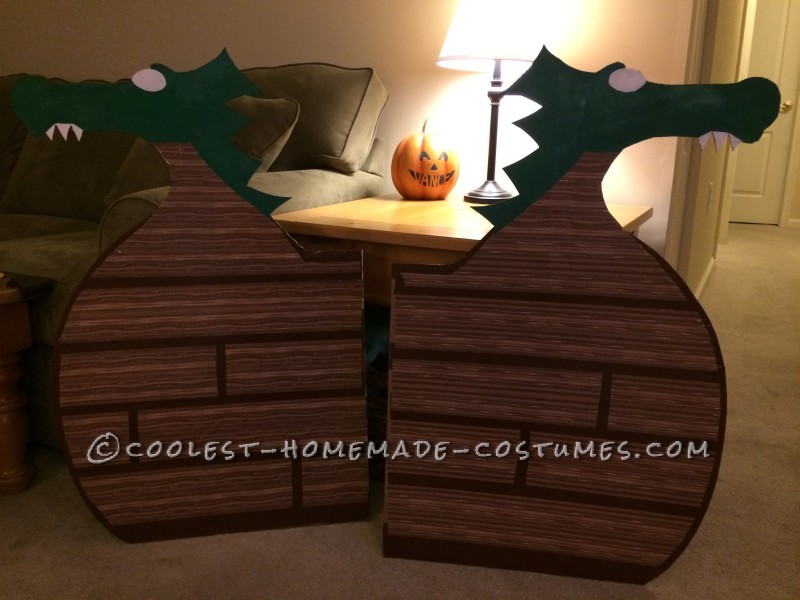 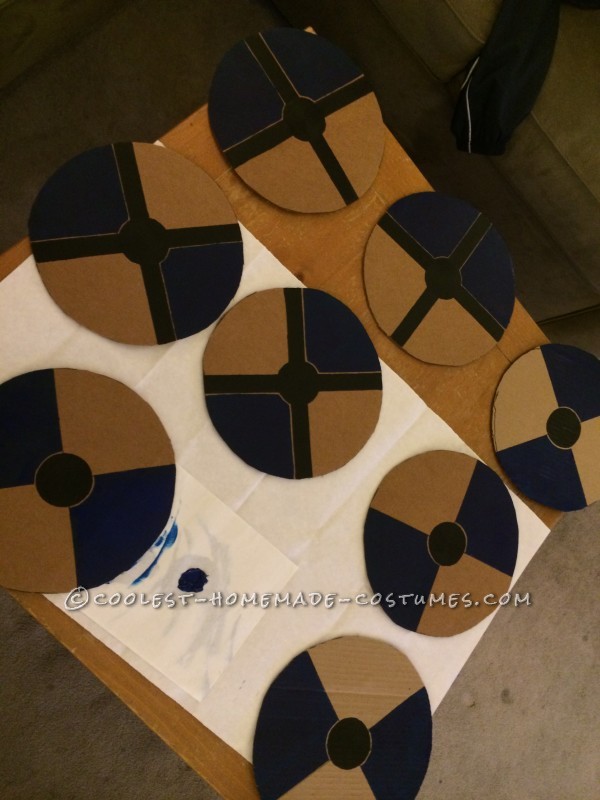 Step Four: Taking the Ship Out For a Swim

Once the paint dried and the frame was in place, we used duct tape to attach the front and back pieces to the sides of the boat, making them moveable as to give the effect of gliding on the water. We also reinforced several parts in the cardboard to make sure it would be stable. The final touches took roughly two hours to complete. 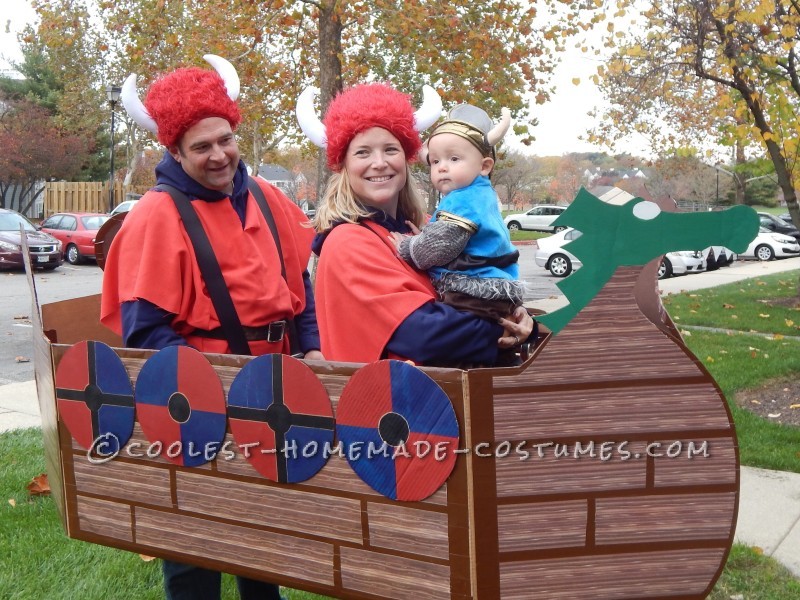 Overall, my husband and I put roughly 15 hours into the boat. Our neighbors knew we were constructing the boat because they had seen my husband outside cutting the frame. They were excited to see the final product and we had to make sure that they all knew to come out to see it. A few clapped, and a lot of them took pictures. We then moved to my in-law’s neighborhood to go trick or treating. As my husband and I walked around the neighborhood a lot of people stared at us, laughed, clapped and had positive things to say such as, “that is awesome!”

As we came to the doors of different houses, most people gave us additional candy as a means to show appreciation for the effort we put into the costume. One stranger even stopped us and asked if he could take our picture!

On social media, our family and friends have showered us with praise for our originality and family-spirit.  Overall, we had a fantastic evening and our son enjoyed the attention, smiles and laughs as well as the high-fives he received this Halloween.