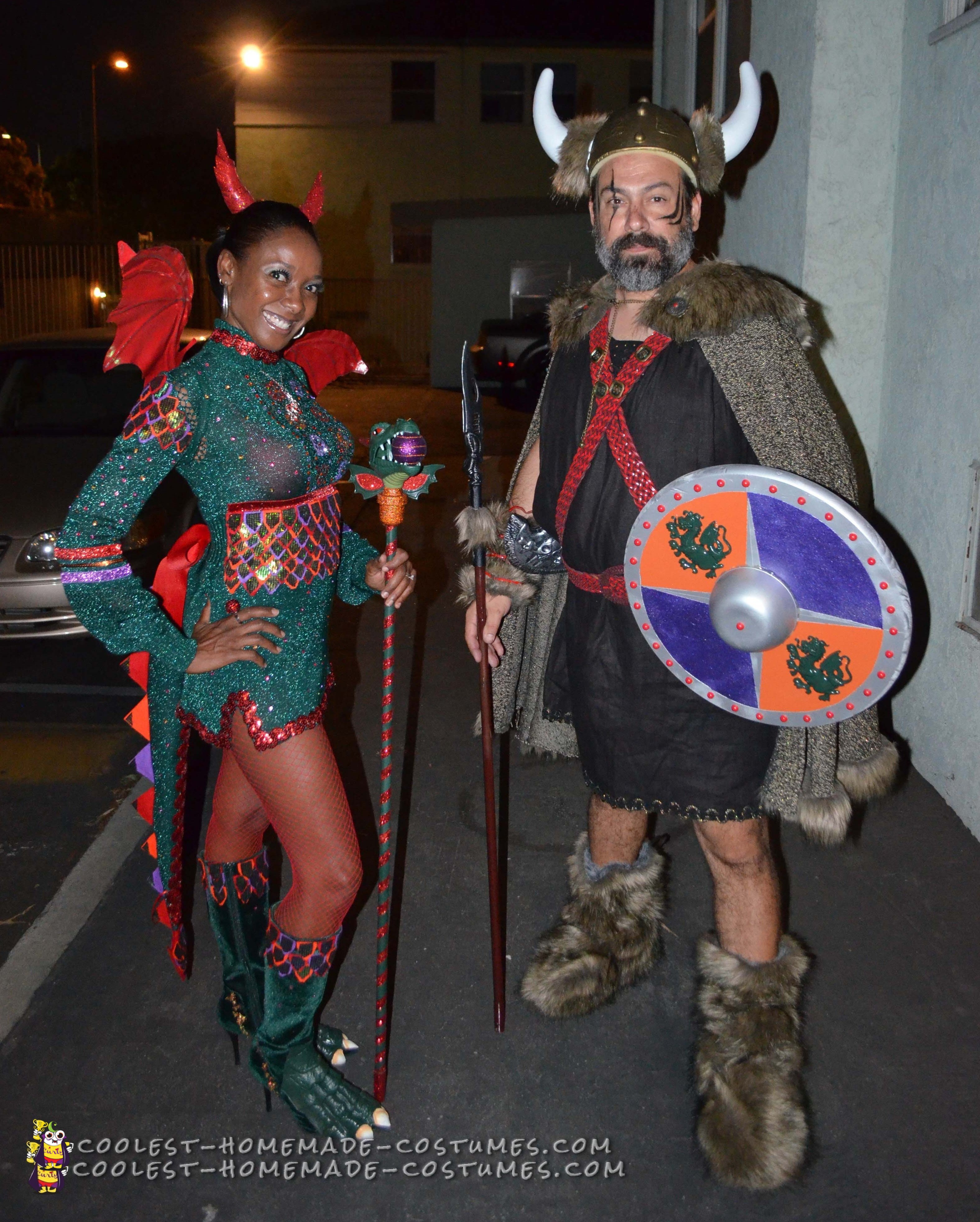 It all began with boots. I wanted the boots. That was how I decided on the costume.

My husband David and I make our own couples costumes every year for Halloween. We’ve had so much fun with it over the years that it has become a very big deal, shrouded in secrecy – all of our friends and co-workers try to guess and/or trick us into disclosing the costume ideas prior to the big reveal. We have been known to request that party guests not post our pictures until the following evening when we have multiple parties to attend. We usually discuss ideas and decide on a costume together, but this year I decided that I wanted to be a dragon and told David that he could therefore be a knight or a Viking. When he chose knight I gently corrected him, and a genius costume was born.

Since neither of us can sew (or even own a sewing machine) we use an awful lot of fabric glue and a hot glue gun. We always start at the GoodWill for the primary costume base and embellish from there with pieces from a discount fabric warehouse.

I found a fabulous long green dress – long enough to have fabric cut off of the bottom to make into a tail. David was nervous about cutting the dress because years ago he cut a dress way too short (now he likes to take cutting a small piece at a time), but I was going to need the entire cut-off portion for the tail. Ultimately his cutting skills prevailed.

Since I cannot sew, I sealed off the bottom of the dress with red sequins so that it would not have jagged edges. I made little slits on the side. I took the remaining material and shaped it into a tail, stuffing it with fiber-fill, and sealing it with Fabri-Tac. Along the seam, I created spikes for the tail using red, orange and purple felt, along with metallic sequins.

I decorated the front of the costume with scales made from the same red, orange and purple felt topped with metallic sequins. I added sequins in the same colors all over the dress for that extra little “pop”, embellishing the flower design of the dress with glitter. When David was certain that the embellishing was complete, I added more sequins. A costume can simply not be over-sequinned.

We constructed the horns from a heavy-weight card stock covered in red glitter. Each horn is composed of a series of six small pieces which interlock as they get smaller, attached them to hairpins.

I made a staff out of a mop from the 99 Cent Store, cut and painted green, wrapped in a red glitter ribbon. I found a fabulous dragon toy online, from which I disassembled the head and attached it to the top of the staff, then put a glitter ball in his mouth, which was a Christmas ornament.

The necklace was made from a keychain.

The “piece de resistance”, however was the boots. I saw a picture online of boots that looked like dragon feet. We made three pairs. The first we spray painted and the crumbled – literally. The next pair became brittle and tore off in my hand. Then, when shopping downtown with my husband for other costume accoutrements for his costume, lo and behold, exactly perfectly tinted green boots.  One pair. My exact size! On sale in the clearance bin for ten dollars! We picked them up and brought them home where we attached claw feet to them with a hot glue gun. Scales and sequins were added, of course, to match the dress, and a dragon costume was born.

My husband was a Viking. We started with a long black dress and fur boots that we found at the Salvation Army Thrift Shop. We went to the fabric warehouse to find fabric to make into a cape, as well other necessary embellishments. We bought a yard of fur fabric, and several leather belts which we ultimately spray-painted red and attached together to make a chest harness. We cut the cape and lined the edges with the fur fabric, also covering the (yes, already furry but not matching) boots with the same fur fabric. David’s staff was also made from a mop, painted brown with an attached plastic knife on the top. We used the fur fabric and pieces of the red leather to cover his forearms, and his shield was made from a painted and embellished round wood table top found at the Home Depot.

We had a great time this year. Many of our friends and family stated that this as their favorite costume to date. We won “overall favorite” at work for the tenth year in a row, and the coveted bottle of wine from a contest at a friend’s on Halloween night. We are looking forward to next Halloween already. 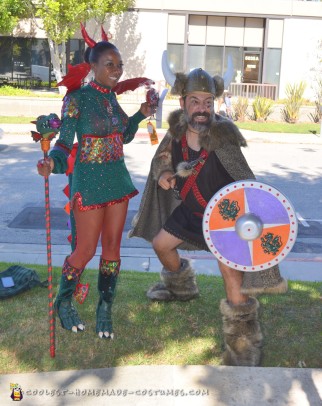 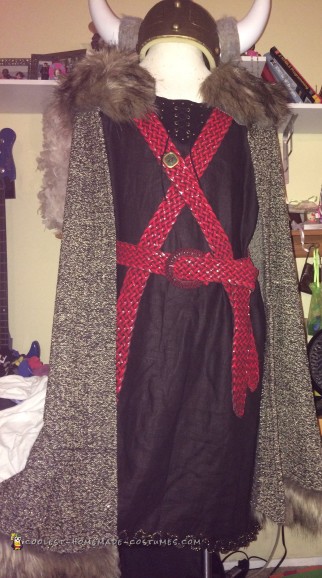 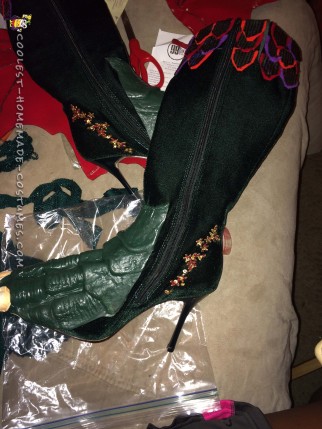 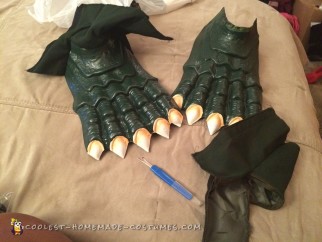 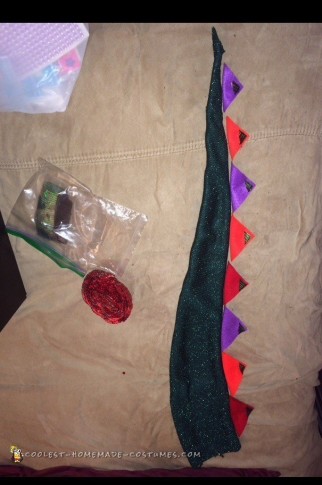 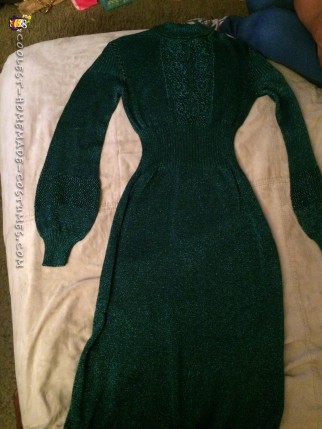