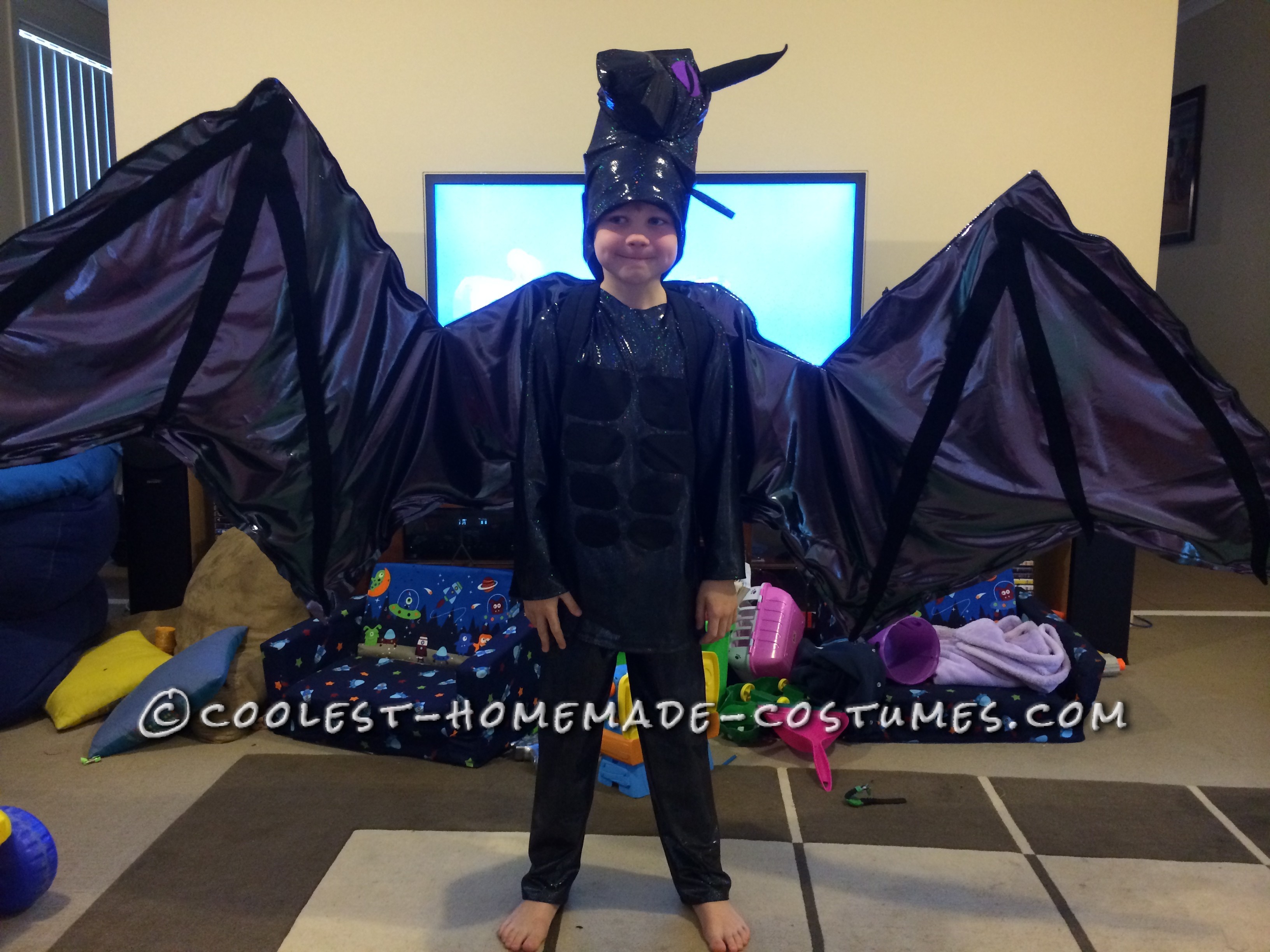 I love making Halloween costumes for the kids, but I’ve noticed as they get older, the costume choices are becoming more challenging!  This year, my 7 yo son hit me with a real stumper – he wanted a Minecraft Ender Dragon, with wings that ‘really worked’.  Ok.  No problem.  Anyone who knows minecraft, knows how pixellated it is, so deciding what the dragon should look like was my first challenge.  It had to be black, but there was so little definition that the only thing that really tagged it as an Ender dragon were the big purple eyes, so they were a must.  I chose some black dance fabrics that almost looked like they were already dragon skin, which was lucky, and some plain black felt for the wings.

So, Step 1:  I found a pattern for making articulated wings on Instructables (by Rachel), which I loosely followed – to be honest, I couldn’t make head nor tails of the instructions, having never really done any woodcraft sort of stuff, so I ended up using very thin plywood, that I cut into shapes that looked vaguely like the instructions, and then just screwed them together with a washer between the pieces of ply to make them turn more easily. The wing base was just a square of plywood that I cut to fit the ‘back’ piece of the backpack that I cut up.  I ended up adding a couple of metal corner thingys (you’ll see them in the picture – I’ve no idea what they’re for!), because I found the wings just didn’t work unless I gave them some flexibility on the bottom.  After that, they opened and closed really well. 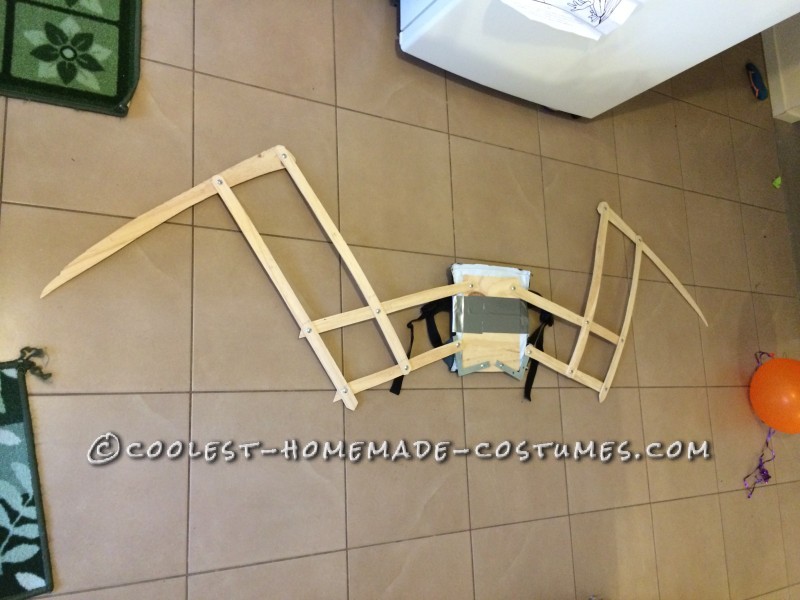 The wing frame at full stretch. 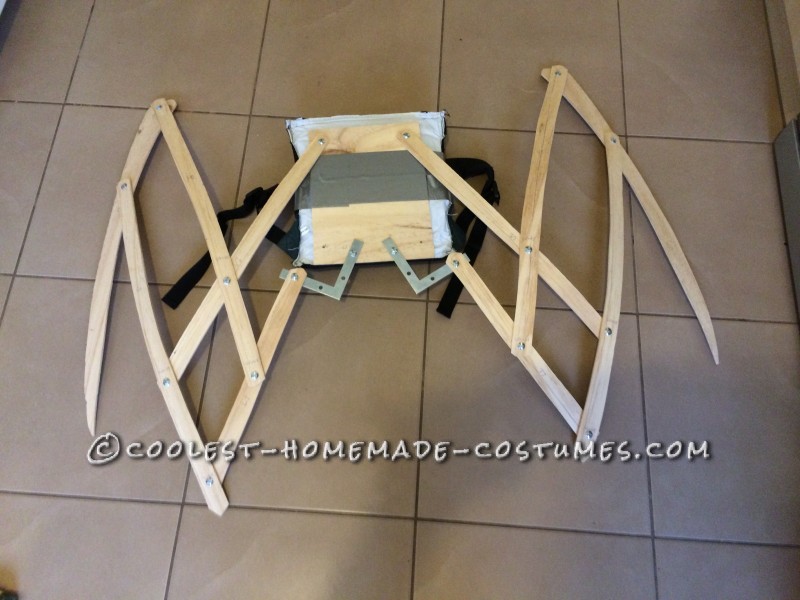 The wing frame folded in close. 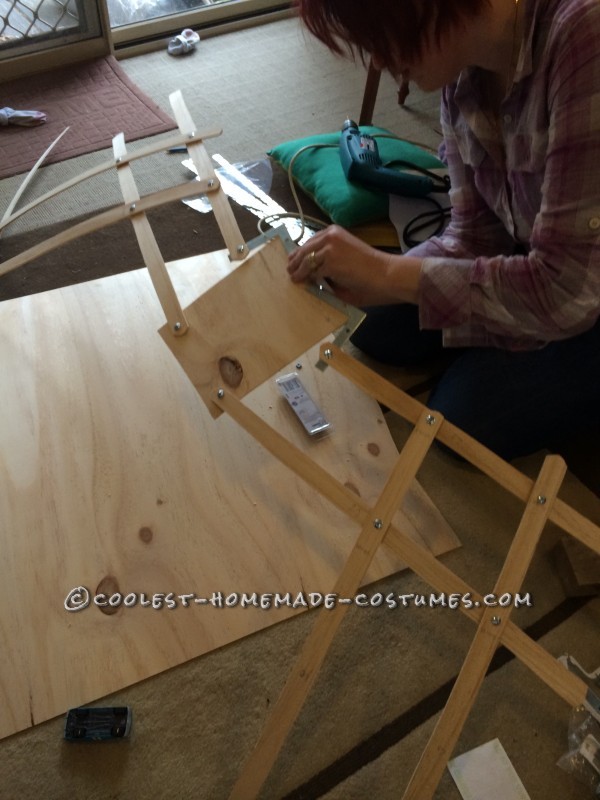 Attaching the wings to a harness

Step 2:  I cut up a backpack that I bought at an op shop for a couple of dollars, to get the harness, and used it to stick the plywood wing base to as well.  I got ‘bitten’ by this dragon several times whilst making the wings, so I already knew it had the Ender dragon spirit in it!  I glued the wing base (with completed wings attached) directly onto the back piece of the backpack, leaving enough of the backpack material around the edge that I could stitch the wing fabric to.  I also added a bit of duct tape around the edges for extra support, although it probably didn’t need it.  I don’t feel a costume is complete without some duct tape somewhere!

Step 3:  After the frame for the wings was complete, and I’d tested it several times, I laid it out at its utmost stretch, and cut the fabric around it.  After that, it was a matter of stitching, partly on the machine, but quite a bit by hand where it was already in place. If you do this costume, make sure you pin the fabric at full open, and then close the wings to see where you need extra fabric to allow the movement – I ended up having to sew extra panels on the bottom (that I had just cut off!), because I didn’t check this first!

Sew the top of the wings on your machine – the whole lot can be done without the frame, and then you slip it on like a pillowcase.  I then sewed along the inner edge of both outer ‘bones’ of the wings, to stop it from moving around too much, and then all that was left to do was sew along the bottom edge to finish them – I did as much as I could by machine, but some hand stitching was necessary.

Making the body and head of the dragon.

Step 4: The ‘body’ of the dragon, was super easy – I got my sons school uniform, and traced around the pants and the top onto material, which I then cut and stitched together without any fancy stuff.  I added pieces of felt to the chest to give the impression of muscles.  I made the head using a cereal box cut into pieces and sticky-taped into a basic dragon head shape.  I then stuck this cardboard head onto an inverted disposable plastic bowl (so that it would balance on my sons head a bit better) and covered it with the same fabric I used on the body, including a strap to go under the chin and hold it all in place.  The horns and the eyes were made with felt and handstitched into place.  I only wish I had allowed more time, because I would’ve preferred to finish the ‘neck’ part of the dragon head so that it framed him, like a tube, with a window cut out for his face.  As it was, it held well enough, but didn’t look as neat as it could have. 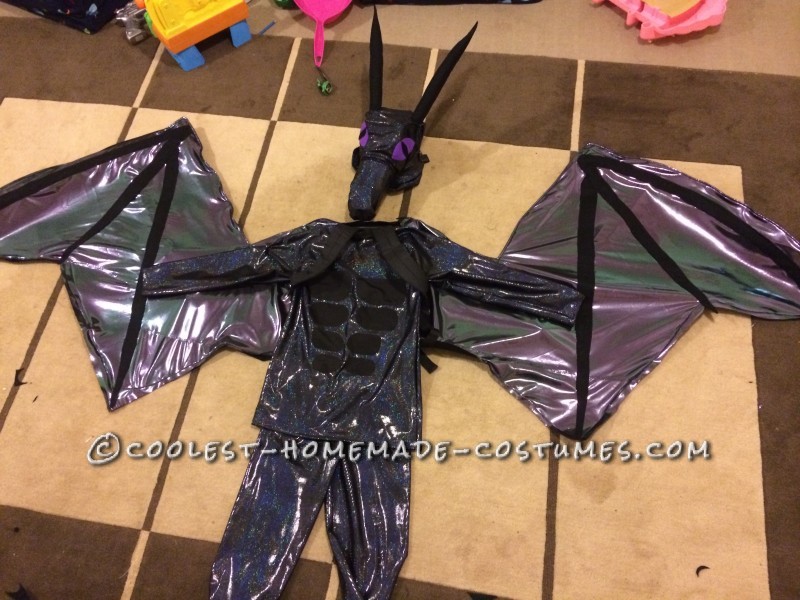 The body is very basic, and was very comfortable for him to wear.

I finished the costume at 5 am the morning of Halloween, and was woken at 7am but my son yelling in excitement when he came out and saw it laid out on the couch for the first time.  When we went trick or treating, he was mobbed by his friends when they first saw him, and was a huge hit everywhere we went.  Overall, it was well worth all the effort, and I think it’s a Halloween he’ll remember for the rest of his life! 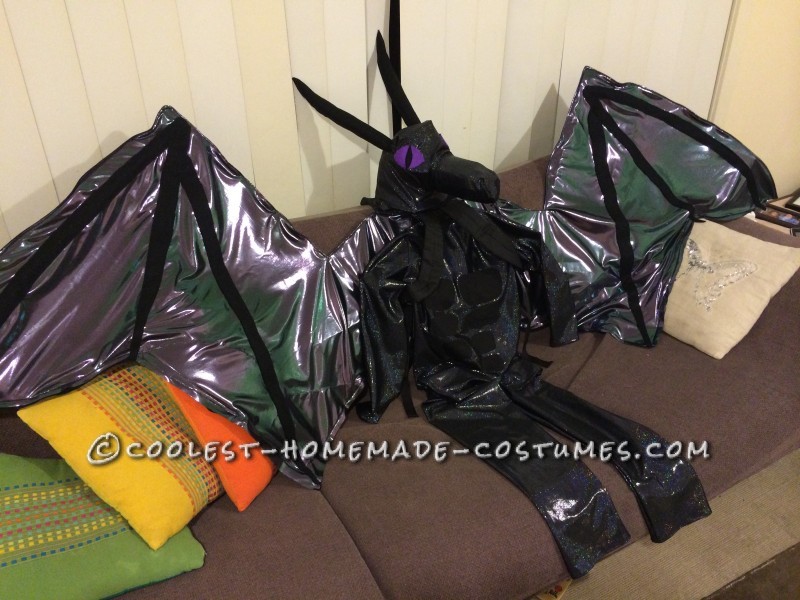 The Ender Dragon having a little rest before his morning discovery by my son. 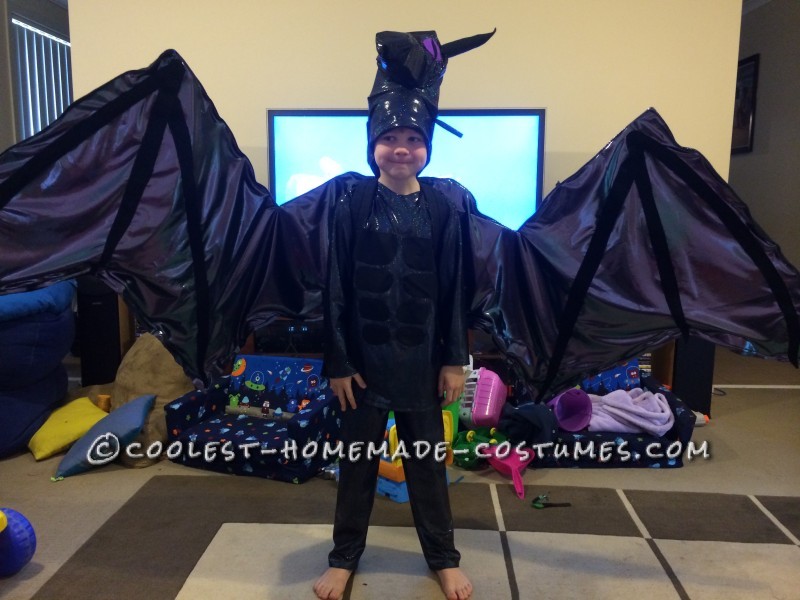 The wingspan was about six and a half feet at full stretch, but we kept it in a little (it looked better). 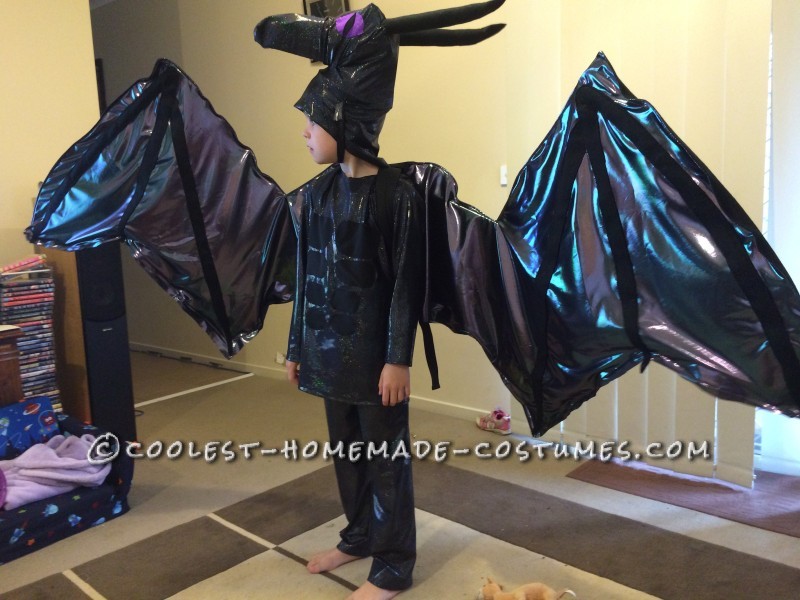 The head, as it looked side on – had to have those big purple eyes! 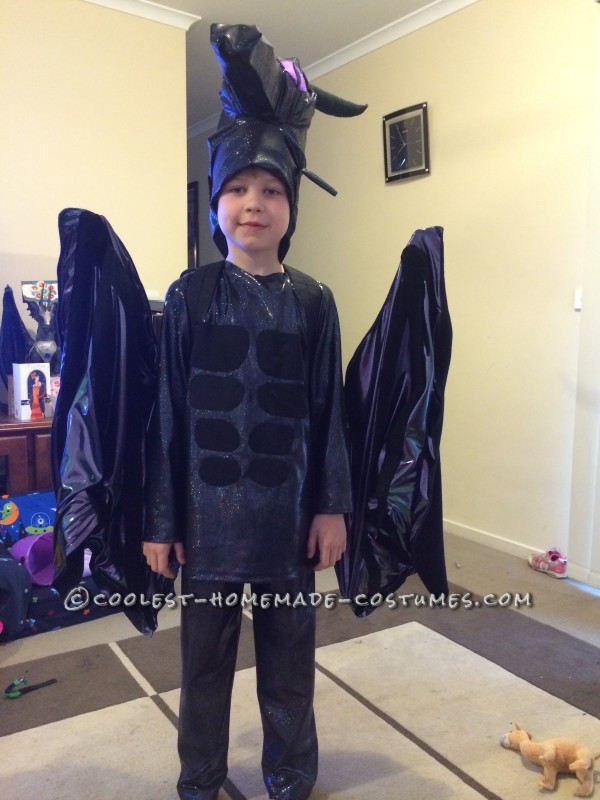 This was with the wings folded up completely. 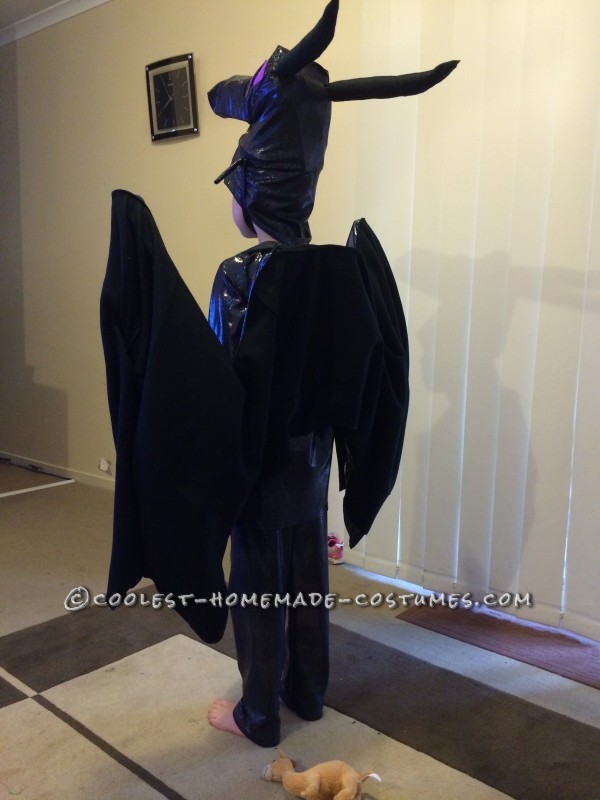 The wings folded up from behind – the back was plain black felt, but the inside of the wings was an iridescent black dance fabric, different to what I used on the costume body. 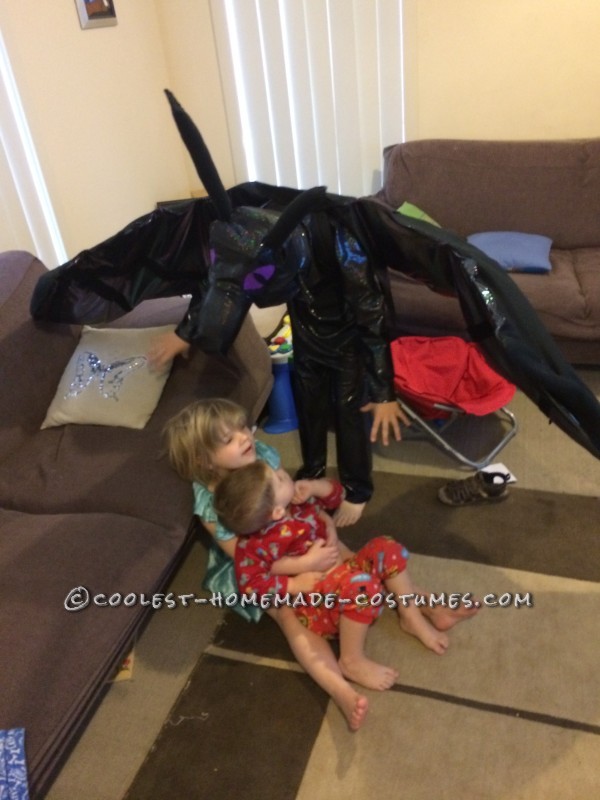 The Minecraft Ender Dragon about to eat his siblings….

Most Amazing DIY Minecraft Costume for a Boy