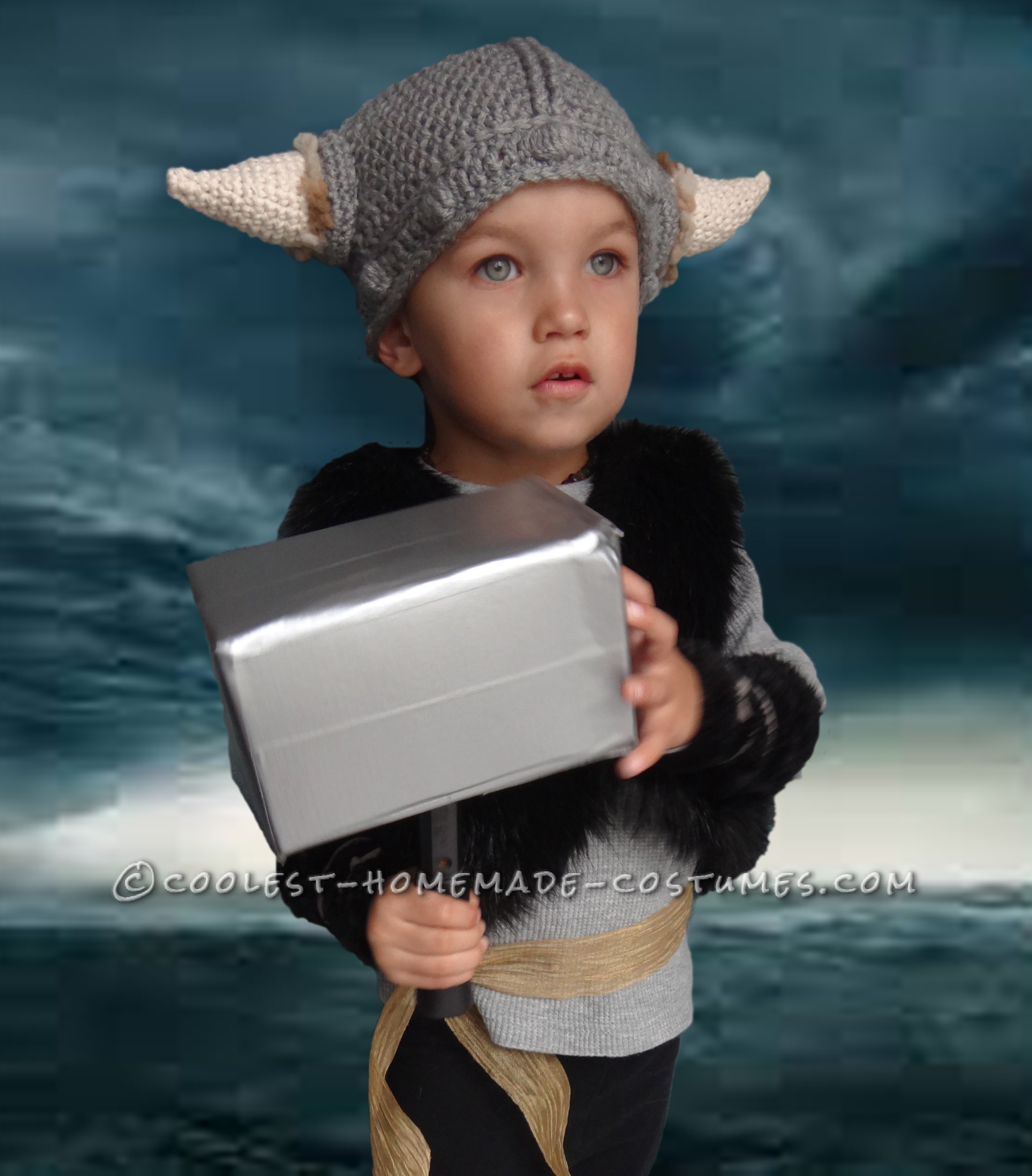 Two years ago we went as a family of four to Romania to introduce our children to their grandparents for the first time. During this visit my sister in law gave me a fur vest as a hand me down for our then three year old daughter. Despite numerous attempts she just wouldn’t wear it. Two years later I figured I better put this vest to good use and decided that it is perfect costume material. Viking costume material that is.

Now I can knit and crochet but I so can not sew. I mean I do have a sewing machine, I am just not good at it. So I figured the hat would have to be made by either crochet or knit. Off to pinterest, ravelry and etsy I went to find a pattern for a viking hat. I remember reading somewhere that vikings never had horns on their helmets, but really, it’s Halloween, anything goes, even if it’s contrary to real history, right? And what else is cuter than a two year old wearing a little itty-bitty helmet with horns?

I thought I could cheap it out and make the helmet from sight off the webpage. I am usually that good, no kidding. But this time, no way. And after I bought the pattern I could see that I couldn’t have guessed the increases and stitches even if I had started this process in January. Since I got a late start – September, I gave in and bought the pattern. Usually I craft while watching some terrible reality type TV, so this was not unusual for me. But this distraction cost me making the horns twice, each. Repeating rounds, missing rounds, not using a stitch marker, guilty, guilty, guilty. So the vest and the hat done. I figured vikings had those arm bands and leg bands and I should make those out of something furry too. Off to Walmart I went to get a bath mat. A really, really ugly furry black bath mat. $3! Great buy I figure. Um no. One cut into the bugger and I realized it was shedding. Black balls of fur, ALL over my house. I have two boxers so I get shedding. But seriously, the dogs have nothing on this bath mat. I’m thinking it’s still worth it, and still looking furry so I get to sewing elastics on it to keep it on my sons arms. OK, remember that I said I can not sew, I’m not being modest, I really can’t. So I sew the shedding bathmat together. Like flat. Not on purpose and I get frustrated and dump the entire business and get a brilliant idea! You know those furry soft socks? Yeah, that would work right? Off to the dollar store I go to get a pair of those.

One hour later I make my first cut, and realize they shed MORE than the bathmat. SIGH.

I figure hairspray will solve that, but they are still sort of shedding and now stick. Whatever I say, it’s Halloween, the sickeningly sweet smell of candy will surely mask that, ha ha.
Now where to find suede cord for wrapping around the bands? No luck at Walmart, dollar store, local creepy convenience store, grocery store. OK, on to eBay. Fake suede cord, 99 cents a meter. I’m partly Canadian, we deal in metric (sort of), so you’d think I would know how really short a meter is. I guess not. I figured two meters was cheap and will work for both arms and legs. Um yeah. These were to wrap around those body parts. So I make one x pass around and tie. Looks okay, good thing he is small. Could have been longer, shouldn’t have thrown those old boots out with the laces on them. Note to self, take all laces and hoard for future costumes. Belt? Ribbon from the dollar store. Leggings, pj pants work. Shirt, undershirt works. Now he needs a weapon or something. A hammer, yes, very viking-ish. Decided to make hammer out of shoe box and duct tape AND a toy hammer. Hammer was a hit. A real hit. In fact if you give a two year old boy a viking hammer in September I can pretty much guarantee you will be making another before October because he will hit just about everything with it. More box, more duct tape, hammer done.
I made an inside costume because he has two Halloween parties to go to, but I will put on black fleece pants/sweater for Halloween night (also some face paint to make a crazy mustache/goatee)
And there you have it, an awesome costume for a two year old boy!