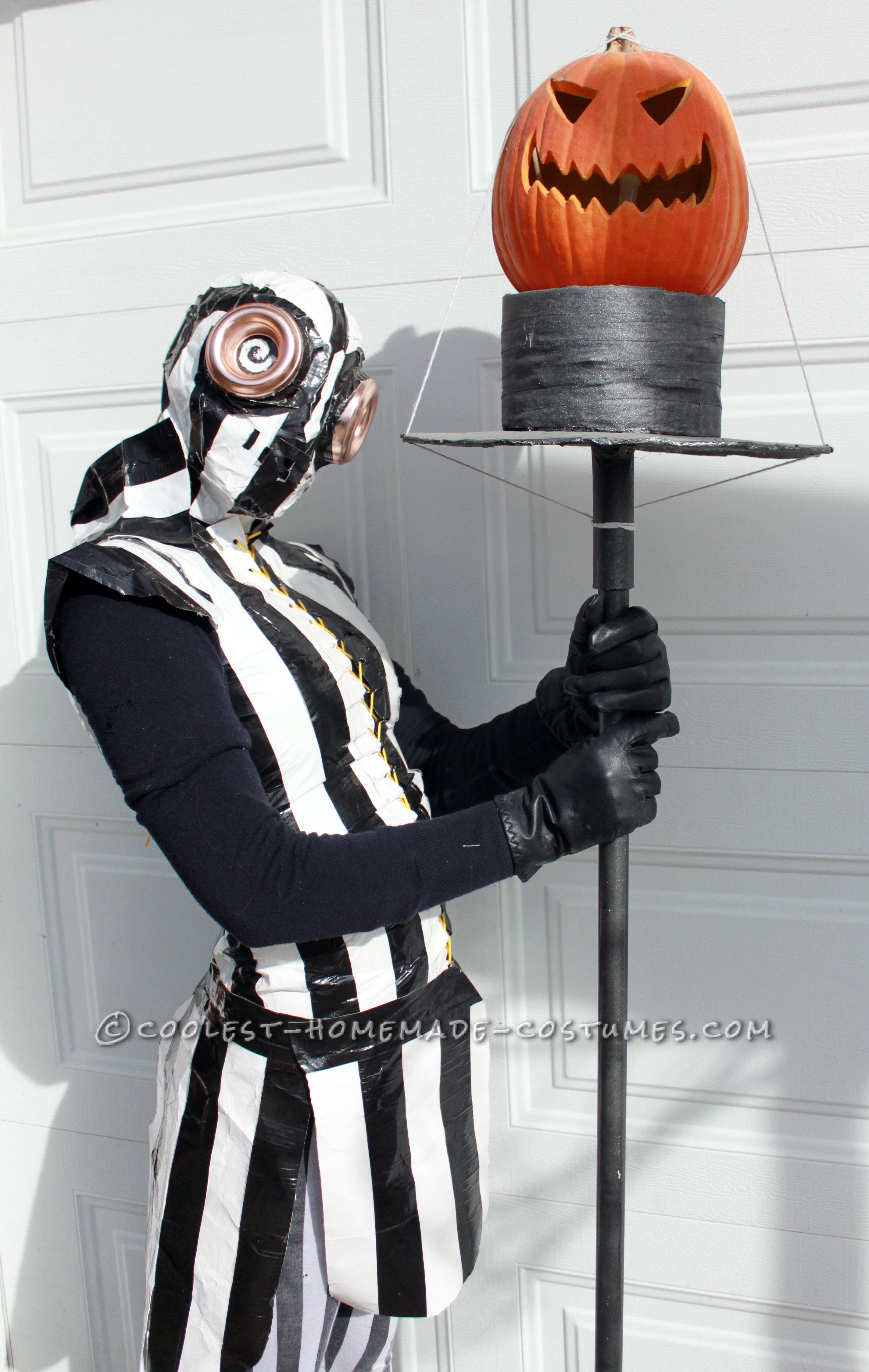 Hopefully everybody has seen Adele’s Rolling in the Deep music video (if not you are missing out). Ever Since I saw it, the dancer in the white dusty room fascinated me. So I decided to draw some sketches of it (one is pictured in the first step), and eventually those sketches became my Halloween costume.

To start off I bought two rolls of black duct tape and one roll white. The original design was going to be brown, since I wanted it to look a bit like the puppets off 9, but alas, there was none. So I made a split second decision and went for a more Tim Burton look.

To make the vest I pulled out a mannequin of my torso I made in art club, which ironically, is also made of duct tape. I plopped a garbage bag over it and started tapeing away. I basically just wrapped black tape around the form until it was covered and then added the white and black stripes. I then cut a slit down the front and was able to remove my piece when I wanted. For the shoulders, collar and skirt (for lack of a better term) I made sheets out of the black and white duct tape and cut out the forms I wanted. I then taped those to my first piece and took a hole punch and bore holes down the front of the vest so I could lace it up with some yellow cord. My torso was done! 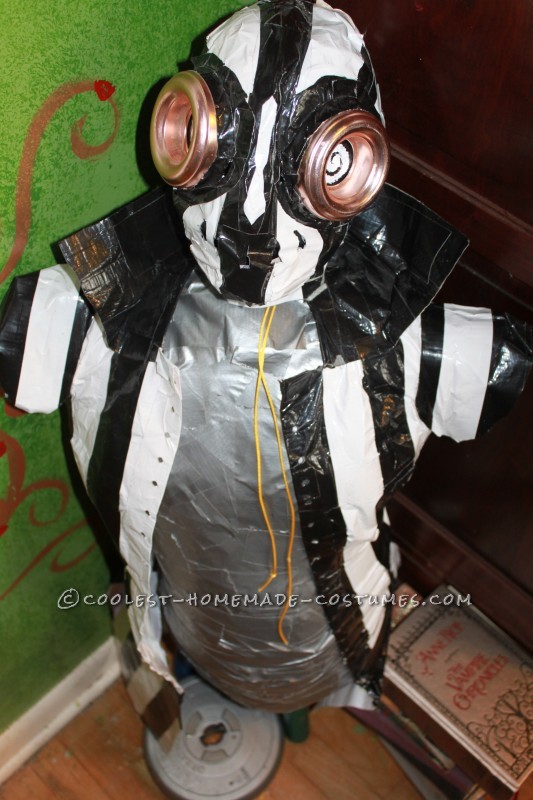 The mask was much more difficult and is NOT SOMETHING YOU SHOULD DO AT HOME! At least, not the way I made it. I put a plastic bag over my hair and taped it along the hairline. I then had my dear sister’s help in covering my whole head, excluding my face, in duct tape. I used a mirror to carefully tape over my face, leaving holes for my eyes and mouth. Next I asked for my sister’s help again in what was probably the craziest trust exercise ever. She had to cut a slit in the skin tight mask, from the back of my neck to the top of my head with a pair of scissors. It was an…experience to say the least. After a nerve racking five minutes the mask came off, and I was able to reinforce it with more tape. I also covered the eye holes and the mouth then added the white stripes. For the eyes I wanted something that looked like goggles, so I went rummaging around the house for something I could use. Eventually I found these small, copper pans that looked like they were used to bake doughnuts and vaguely resembled goggles. I taped them onto the mask and painted swirls in the center of each one. I then cut very small holes at the base of each one for my eyes (you can see my finger sticking through one in the picture) For the mouth I cut out five small rectangular slits and covered over them the inside of the mask with a bit of breathable, black fabric to hide my mouth. To do up the back of the mask I repeated the same hole punch and cord process I used for my vest. 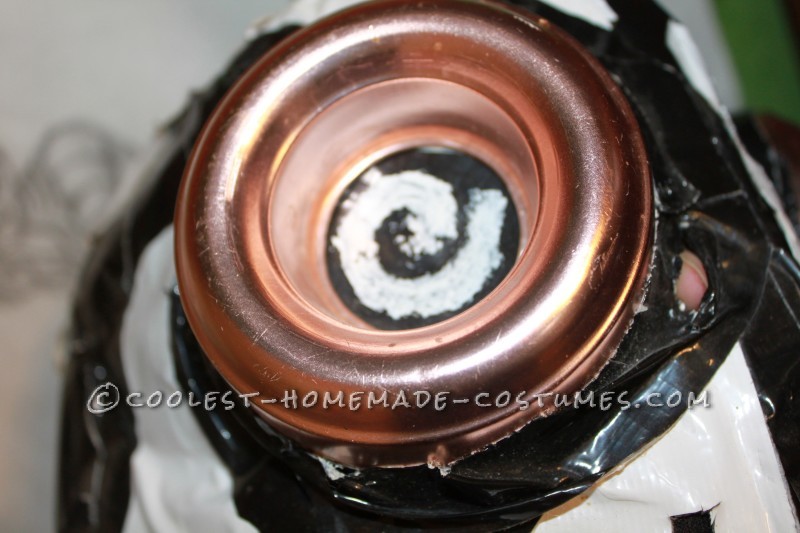 The weird pumpkin staff was an unrelated project I started earlier in the year. It was suppose to be the light staff from the movie 9, but I could not find a giant light bulb, so it was laying in my room unfinished. I decided at last minute it would go with my costume and plopped a foam pumpkin on top. To make it I cut a circle out of cardboard and stuck a pvc pipe through the center and piled 3 foam circles on top. I then covered the cardboard and foam in paper mache and spraypainted the whole thing with metallic paint. To attach the pumpkin I stuck some wooden dowels in the top part of my staff, slid the pumpkin over them and secured it with string. For added effect I put a glow stick in the pumpkin, which was a good call since I had pinhole vision when I put the mask on. However, my brother still had a fun time making me trip over rocks and fall into ditches while trick-or-treating. Other than that, my costume was a big success. Alot of people took pictures and seemed surprised I had made it out of duct tape. But did scare a kid when I went running after him so I could get a better look at his Joker costume. 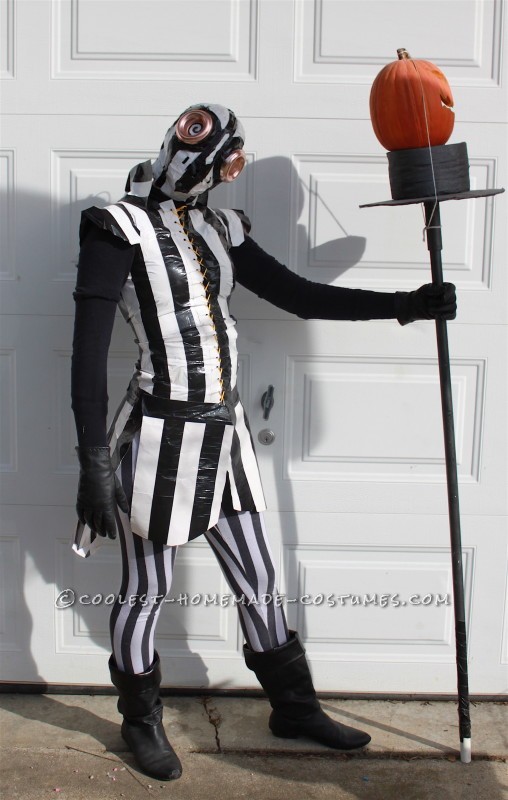 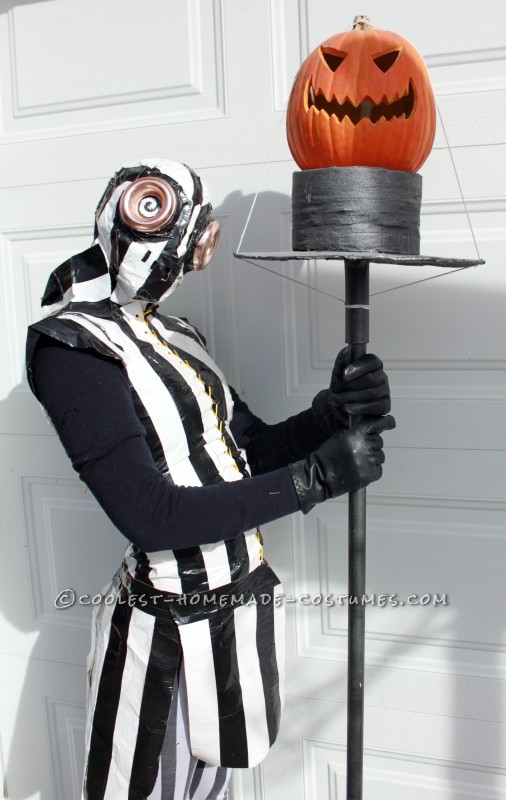 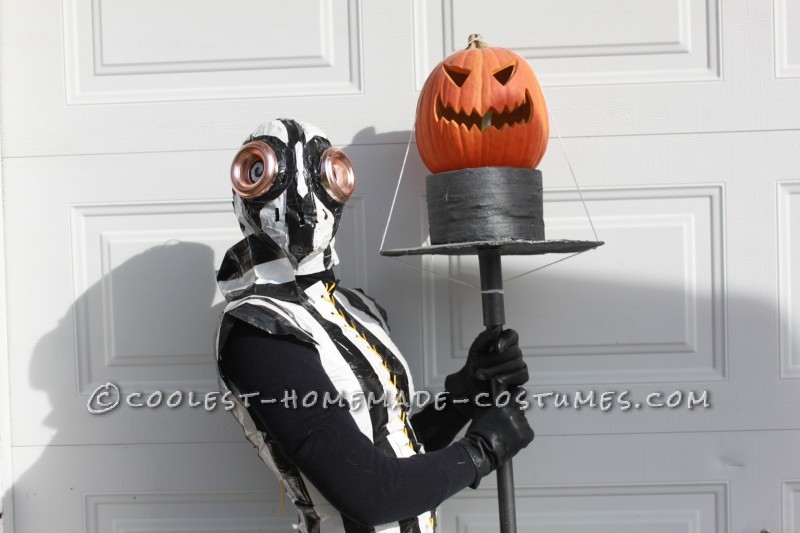