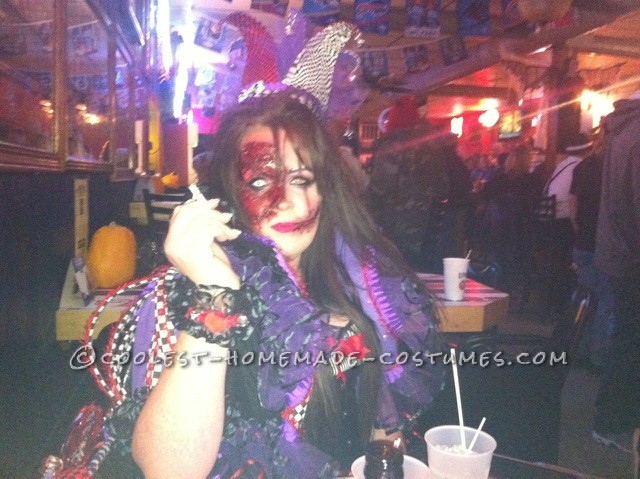 I am pretty creative when it comes to all aspects of crafting and creativity as a whole. I was just born with that creative bone, I suppose, but when it comes to costume ideas, I basically hit a brick wall. I feel as though it has all been done before. Although I do make all of my own costumes by hand and I usually win first place as well, the idea behind the costume itself seems a little overdone. So I always try to put my own spin on it. For example, last year I was a peacock and I made everything by hand: jacket, skirt, corset, even covered my shoes with some of the 450 feathers I ordered from the internet. My real personal spin though was the actual working tail which when extended, spanned about five feet around. So much so that I was unable to fit in a car. I had to find a friend with a mini van to take me to the bar.

So it is somewhat obvious that I normally go for the girly, cutesie type of costume, but this year I wanted to still have a beautiful costume but to add a lot of gore as well. The train of thought started when I was remembering the guy from silence of the lambs who skinned his victims and then wore the “skin suit” (it puts the lotion on the skin, hah!). I was then searching google and saw some old time court jesters with the big poofy sleeves, and the elaborate jester hats and ruffled collars. I thought “to combine the two together would be an ultimate challenge”. When it comes to costumes, I love nothing more than a nice challenge. This costume proved to be just that, “the ultimate challenge.”

I began by making the 1/2 faced “skin mask” which I shaped to my own face. I did this by putting plastic wrap over one side of my face and then applying about three layers of paper mache which was very time consuming since you have to wait for each layer to dry before you apply another. Once dry, I then added liquid latex as well as pieces of toilet paper to the edges and then another layer of latex. I shaped the paper to look as though it had been ripped off of my face, of course. Once dry, I applied flesh colored paint and then my own makeup just as I would to my own face. I then cut a tiny chunk of my own hair by my neck and one by one, with tweezers, added tiny hairs where the eyebrow should have been. I then added red, brown, purple black, and dark red paints to the edges of the outside as well as to the edges of the eye hole. I then drew on the jester type triangle from the top to the edge of the eye hole and again from the bottom of the eye hole to the bottom of the mask. Once I was sure everything was dry after a few days, I added some store bought blood, which seemed too bright, so I made my own with corn syrup and red, green and blue food coloring and added in some of the store bought blood as well. VOILA! PERFECT BLOOD COLOR!

At this point, I added the jester type triangles to the inside top of the mask. The triangles consisted of poster board which were enforced with wire and then covered with fabric. I then trimmed them all with matching trim. I added bells to each tip and curled the triangles to my liking. I then added feathers and numerous accessories, which are supposed to be used for floral arrangements, but not in MY house, Lol! I added a fabric covered dowel and lots of ribbon; and there you have, the evil jester skin masquerade mask.

For the costume itself I used many fabrics, all of which coincided in one way or another. Mostly checkered, some just plain, but all in red, white, black and purple. I used these to construct the hat and jacket. The jacket was made with a pattern that I heavily manipulated. I added wired covered strips onto the sleeves to make it look more mid-evil as well as a very large ruffled collar to resemble a jester’s collar. ( I did not want to actually wear the collar around my neck.) The Hat was constructed with hot glue and was made completely with poster board and wire fabric covered triangles. I then bent each triangle to face down and added a bell to each tip.

As for the skirt, I made a normal petticoat (something like a tutu, but fluffier) with about 70 yards of organza and trimmed it with red and purple ribbon. I made an over-skirt with the same kind of triangles that I used for the hat, although I used interfacing rather than poster board to reinforce the stiffness. I also added black and red pom poms to the tips instead of bells.

I also made a staff with a small black glittered skull that I found on clearance and hot glued him to a fabric covered dowel. Added lots of bells and ribbon and of course a little jester hat that matched mine. Since I couldn’t find tiny bells for his tiny hat, I used tiny silver beads.

I made gathered ruffles which I sewed to elastic to go around each wrist and each ankle. I did not wear gloves like most jesters, because I wanted to show off my black and white checkered manicure.

The reactions were overwhelming! Everyone was asking to take pictures with me. A few reactions were rather raunchy, but that is to be expected when around a group of drunk people partying.

Once I mentioned that I had made the entire costume myself, it was basically utter disbelief. I was not offended by this at all. The way that I see it, if people think that the costume was THAT great that just little old me could not have fashioned it on my own, I must be doing something right.

I entered only one costume contest this year, as opposed to my normal 3-5 contests. This happened to be at a casino. There were 200+ contestants. I was placed in the top 12. This is very good, I know. But still, I was a little broken hearted. When I walked off the stage with my tail between my legs, I was bum rushed by at the very least, 30 people who, might I add were VERY mad that I had not won. I have to say this made me feel a little better. After that, while passing, I had numerous pats on the back saying how “the contest had to be fixed if I hadn’t won” or “Man, those judges need glasses” some other replies I will leave unsaid. Although one man did offer to drive his car through the building if I wanted him to. I declined his offer politely. Lol!

My face was also part of the costume, obviously the skin mask shows that I had half of my face ripped off. So I began the grueling process of making up my face, which might I add, I had never done before. This took me from 11 am until 7pm. All I had was craft latex which I can bet is not safe for use on skin, but a little chemical burn never hurt anyone, right? I basically used the same process as I did with the mask itself, once it all dried, I pulled the edges away from my skin to look as though the top layer of skin had been forcefully ripped off my poor face, ugh. I used the same technique once again with the toilet paper as I did with the mask. I also tore up cotton balls and spread them on the exposed skin and then covered with blood. It looked basically like a fleshy wound. I built up parts that were gaping by using dark eyelash glue that once dried, I slit open and stuffed with cotton. I added eye-shadow around the edges, black to make a  shadow effect  and brown, red, green, blue and purple, just to create some bruising; added some inside the wound as well and then went over everything with large amounts of my homemade blood.

Since I always take everything to the max, I decided to do something to the pretty side of my face. I added more latex from the corner of my lip in a thin strip up to my cheek to make it look as though my mouth had been slit open. I cut open the latex and added cotton and lots of blood to the inside of the wound. Then once again bruising and shading with the eye-shadow. Then for an even cooler effect, I added thick string in the shape of x’s to make it look as though it had been sewn shut (not by a surgeon of course). I attached the string with eyelash glue and added small amounts of shading and dots of blood where the string would have been coming out.

I threw in a white and black swirly contact on the ugly side of my face, which I can promise I will never do again! It took me a half hour to get it in and 20 minutes to get it out, after having a few drinks, it was a real chore. My eye is still sore.

Aside from that, It was a great night, especially after my totally awesome friend ran home to my house for me to grab my black and white converse so I didn’t have to suffer in my patten leather stilettos for the rest of the night, lol!

Side note, I did not make the corset, nor did I make the striped stockings, although I did add purple and red bows to the back of them.

And of course, I did not make the stilettos or the converse! lol.

And just an F.Y.I. for those of you thinking of making your own blood, it does look great! Probably the closest you will come without paying for the real good stuff, but just be ready to have a pink face for a few days, unless you don’t mind going to get a chemical peel the next day, lol!

But hey, just like I said about  the chemical burn, a little stained face never hurt anyone, right? lol! 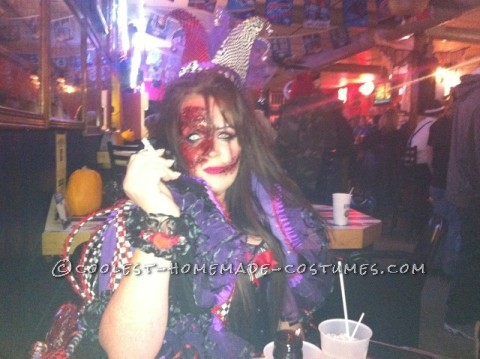 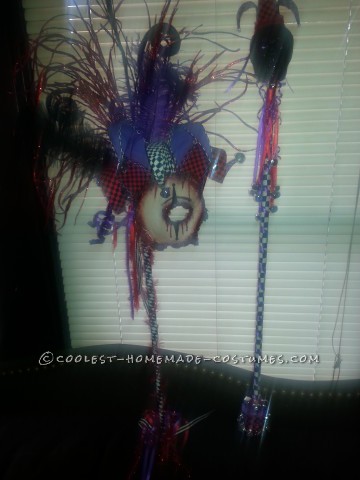