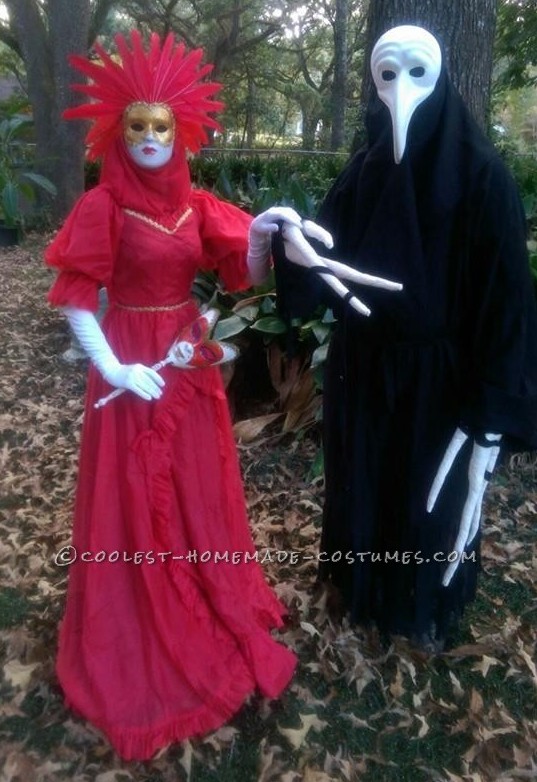 Welcome to the Masquerade:

Mysterious masks are the hallmark of Venetian carnivals, and on Halloween this year, Alabama got a little taste of Italy. My Venetian carnival costumes are inspired by the elaborate masks that are worn during the famous festival Carnevale di Venezia.

As a freshmen in college, time is hard to come by, so I began to make these costumes in August so that they would be finished by Halloween. Halloween is one of my, and my boyfriend Jesse’s favorite holidays, so we get excited to dress up every year. This is my second ever attempt to make costumes by hand for the both of us. I wanted to make something unique that our friends, family and even strangers could enjoy as much as us, so I began to brainstorm for costume ideas way before Halloween season. I discovered a picture of a Venetian Medico della peste or plague doctor mask online and it sparked my imagination.

My two characters come from Italy and their story is one of tragedy and endless love. The bird masked creature was not always a creature. He was once a plague doctor in 17th century Venice. His mask was worn to protect him from diseases as he cured the sick, but sadly, the mask was no shield against the unknown disease that changed his life forever. The disease that he caught is slowly turning him into a creature with long white fingers and a face that he hides with his mask and hood. The red lady is the woman he loves, and she stays by his side even though they can never truly be together. 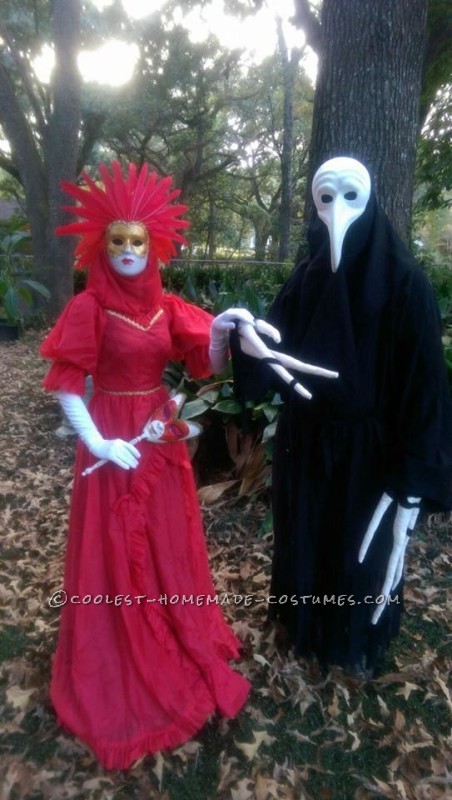 the bird masked creature and his lady

The costumes were a challenge to make, but the process was so much fun from the concept all the way to the finished pieces. I made the two hands for the bird masked creature through a lot of trial and error. I brainstormed different designs until I came up with one that would be functional. I started with two black garden gloves so that I could mount three fingers onto each one. I made the fingers by cutting out sections of pipe insulation and shaving them down with a steak knife into the shapes of the fingers. I then wrapped them with multiple layers of electrical tape until they were curved and had a bumpy texture. Then, I wrapped them in white sport tape to achieve the white color and bandaged look. The fingers are hollow, so two human fingers can slip into each creature finger. The thumb gets its own creature finger. The fingers are hot glued onto the glove so they’re easy to wear. The back of each glove is covered with a piece of crafters foam that is wrapped in the same sport tape as the fingers. This gives the bird masked creature two complete hands and not just fingers. But the fingers are the most visible and striking part! So, I made it to where each of the six fingers move realistically with the human hands underneath. To top them off, they are swathed with strips of black fabric. Creepy right? 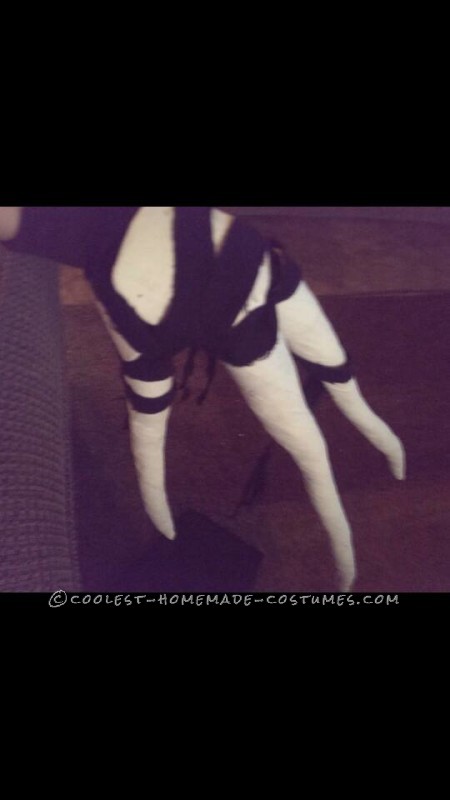 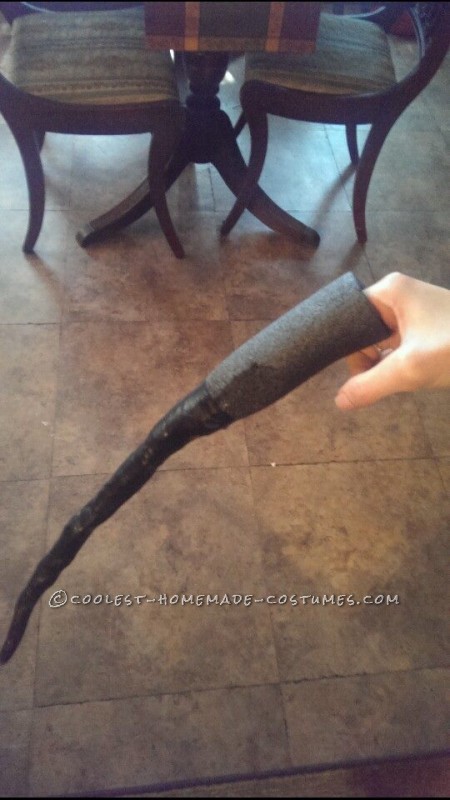 one of the fingers in progress! in this image, the pipe insulation has been shaved down but is only covered partially in the black electrical tape.

The bird mask and black cloak

The bird masked creatures’ hands were made to match his mask. I bought the mask online and then added things to it. Thin black material covers the eye holes so that the eyes of the person wearing the mask are not visible. The hood is hot glued onto the mask so that it slips easily over the wearer’s head and is comfortable.

The black cloak is completely hand sewn. It is made out of thick black fabric that I shredded at the bottom so that it appeared old and tattered. The cloak is topped off with a shredded fabric belt that I made with scraps that were left over from making the cloak itself. 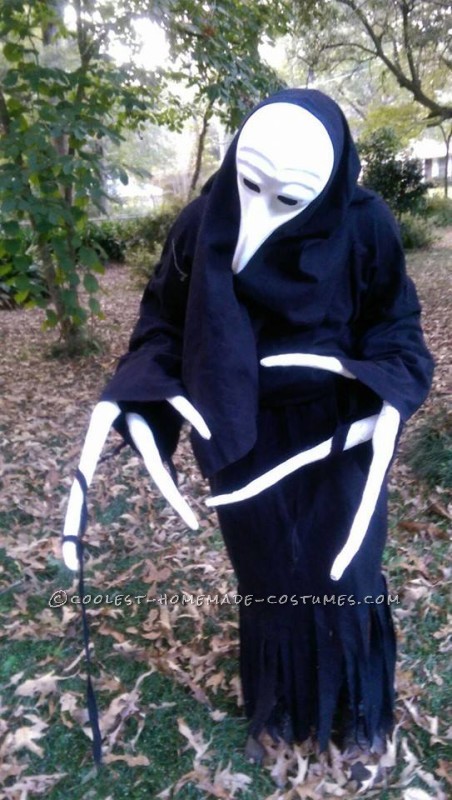 the bird masked creature looks at his hands

The red lady’s masks and outfit

Both of the red lady’s masks are hand painted and hand embellished. The mask for the red lady’s face was the hardest to decorate. I started by using a mechanical pencil to draw each of the cracks individually onto the blank mask to make it look like cracked porcelain instead of plastic. Once the entire lower half of the face was covered with lines, I sprayed a thin layer of hairspray over the pencil as a fixative to keep the lines from smudging. Next, I used hot glue to apply the feathers to the top of the mask. The fringe was applied in the shape of a mask around the eyes and I painted the area inside with Venetian gold paint and piped a lighter gold paint on top of the first layer to create the ornamentation. The red material that conceals the head and neck was hot clued behind the feathers. Lastly, I painted the lips red and added the thin black fabric to hide the eyes like I did for the bird mask.

Pretty much the same process was repeated for the hand-held mask with the addition of having to pipe filigree onto the stick on which the mask is mounted.

I bought the red dress from goodwill and added the gold embellishment so that the dress would match the masks. I’ve had the gloves for years and finally got to use them! 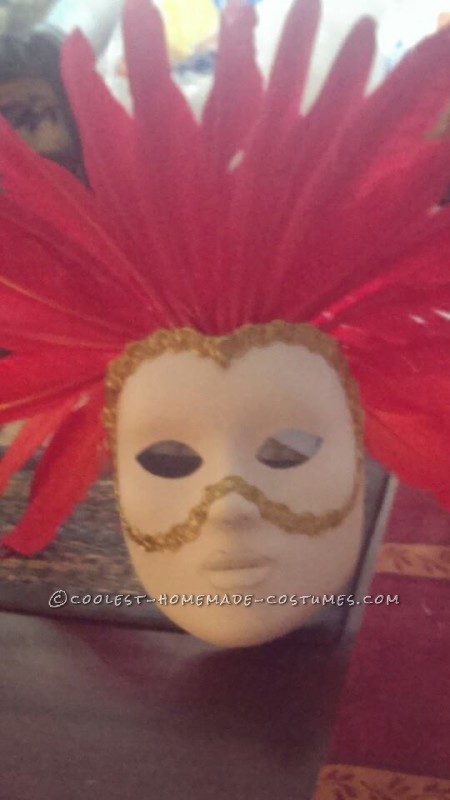 this is the face mask in progress 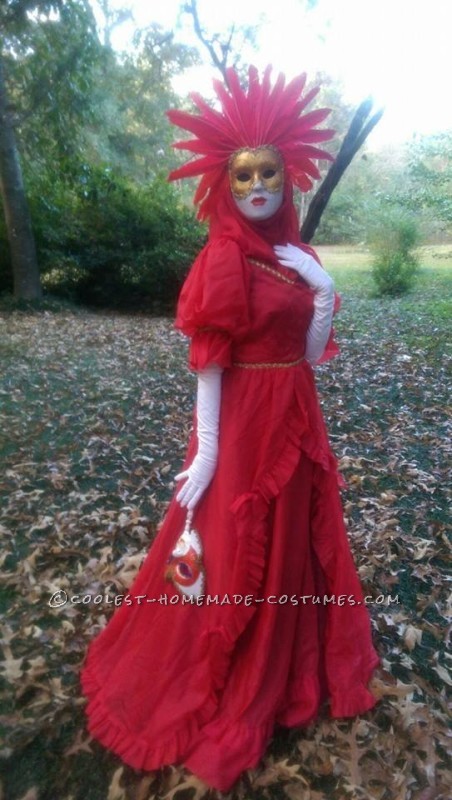 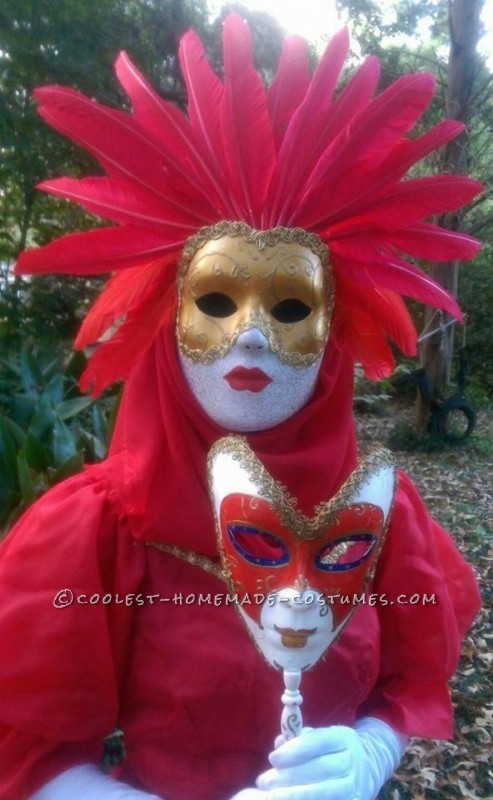 a close up of both the female masks.

The reactions we got

The best part of Halloween this year was definitely the reactions that both of the costumes got from children and adults. Jesse and I remained in character the entire time that we were in the costumes. We attended both a street party in uptown Foley Alabama and a Trick-or-Treat at Bellingrath Gardens for Halloween. We showed up at both events mysteriously and walked together. We both felt like celebrities because we couldn’t walk more than thirty feet without being stopped by strangers to have our picture taken. Children were more open to my character than Jesse’s; however, they were still cautious. One little girl clung to her mother’s leg and whispered “where are her eyes?” I was referred to as the red lady many times, so I decided that that would be the name of my character. Jesse played the bird masked creature very well by walking behind me with his hands hanging limply by his sides. The finger pointing from both children and adults was endless even from across the street at times. We even had a small line of people who wanted their pictures taken with us a couple of times. Little girls and ladies alike were delighted when I offered them my hand-held mask to wear in the photos. They loved that they got to be a part of the costumes with us. We found out very quickly that some children were braver than others when it came to approaching the bird masked creature and the red lady. But they all enjoyed watching the creature’s hands move and smiled when I blew kisses to them with my plastic red lips and gloved hand. A little boy with a light Sabre attempted to fight the bird masked creature, but soon decided that it was more fun to touch his long fingers. I heard someone say about the red lady “Look! She has different faces” as I lifted my hand-held mask to cover my face mask. We even had a group of strangers ask where we bought the costumes. They were both amazed and disappointed when they found out that they are completely original. The reactions from both kids and adults were perfect rewards for all of the hard work. Jesse and I both had the best time on Halloween and even though our faces were hidden by masks all night, we were constantly smiling. 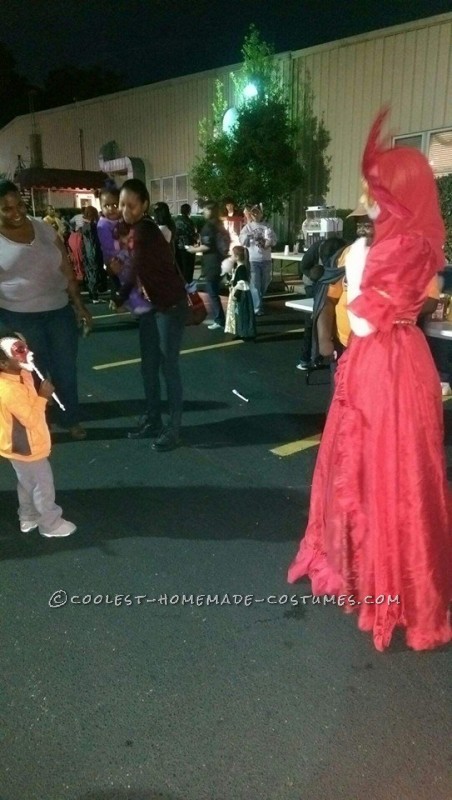 In the photo, the little girl is wearing my mask before taking a photo with me 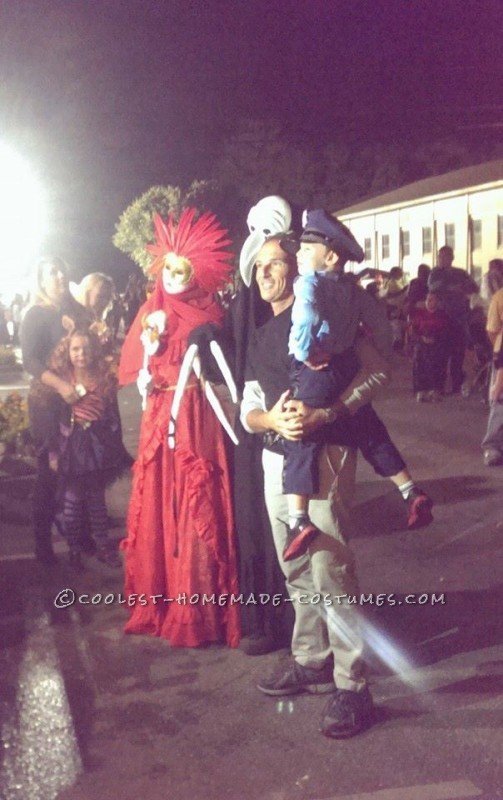 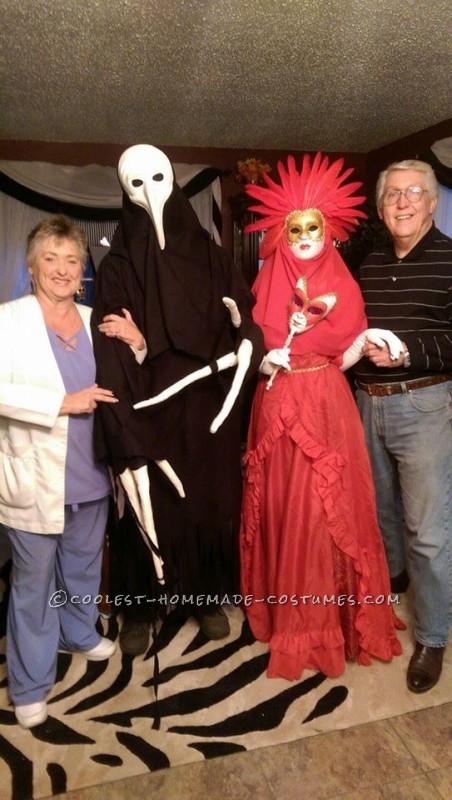