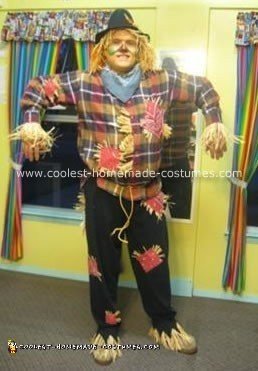 Here’s how I transformed from a weekend warrior golfer to a mild mannered scarecrow Halloween costume. The first thing we did was go to a nationally recognized party store to look at costumes. After about an hour, we weren’t very impressed. So, we decided to go to our local Goodwill.

At Goodwill, my wife found a black hat with raffia glued to the inside of it. This was all the inspiration I needed. I knew that if I only had a brain, I could be the scarecrow.

With the straw filled hat in hand, I set out to find the rest of the costume. First, I found a plaid long-sleeved flannel shirt. Goodwill also had some raffia, rope, and bandannas for next to nothing. The pants were a challenge until I had a light bulb above the head moment. (And this happened before I visited the wizard!) Instead of going with jeans, I would get some black jogging pants, cut out the elastic from the legs, and then cut up the bottom to make it look frayed.

Here’s how I made my costume for my middle-aged night of trick or treating. (1) I hot glued raffia to the inside of the hat and then put it on and gave myself a “haircut.” (2) I hot glued raffia so that it stuck out of some of the openings between the buttons. (3) I hot glued raffia to the cuffs of the shirt and then trimmed the straw. (4) I cut out a “patch” from the bandanna and glued it over the pocket of the shirt. Before gluing it down, I placed some straw (raffia) around the edges so that it looked like the straw was poking out of the patch. (5) I glued similar “patches” with straw to the shirt and pants. (6) I cut out the elastic from the pants leg cuffs and then cut out triangles from the edge to make points on the pants legs. (7) I glued more straw to the cuffs of the pants, put them on, and trimmed around my feet. (8) A bandanna around my neck and a piece of rope around my waist finished the crow deterring ensemble. (9) Finally, I went back and hot glued strips of the bandanna on top of all of the straw on the inside of the costume so that I wouldn’t feel so scratchy. (Scaring crows may be an important job but one should never skimp on comfort. At least that’s what the Tin Man told me.)

The face makeup was created by mixing food coloring with an ivory liquid foundation base makeup. The “patches” on my cheeks and nose were done with the colored foundation and outlined with liquid eye liner. After outlining the patches, stitch marks really brought the look home. The eyebrows were also done with the eye liner. After covering up my original eyebrows with the colored foundation, I drew triangle like eyebrows with straight bottoms. The cheek patches were blue and green. The nose patch was red. Finally, the rest of the face was a straw yellow.

I don’t know if we will ever go this far again for Halloween, but it sure was a lot of fun. Many thanks to my best friend of twenty-five years for all the help and humor. She ended up being a witch. (But only for Halloween!)